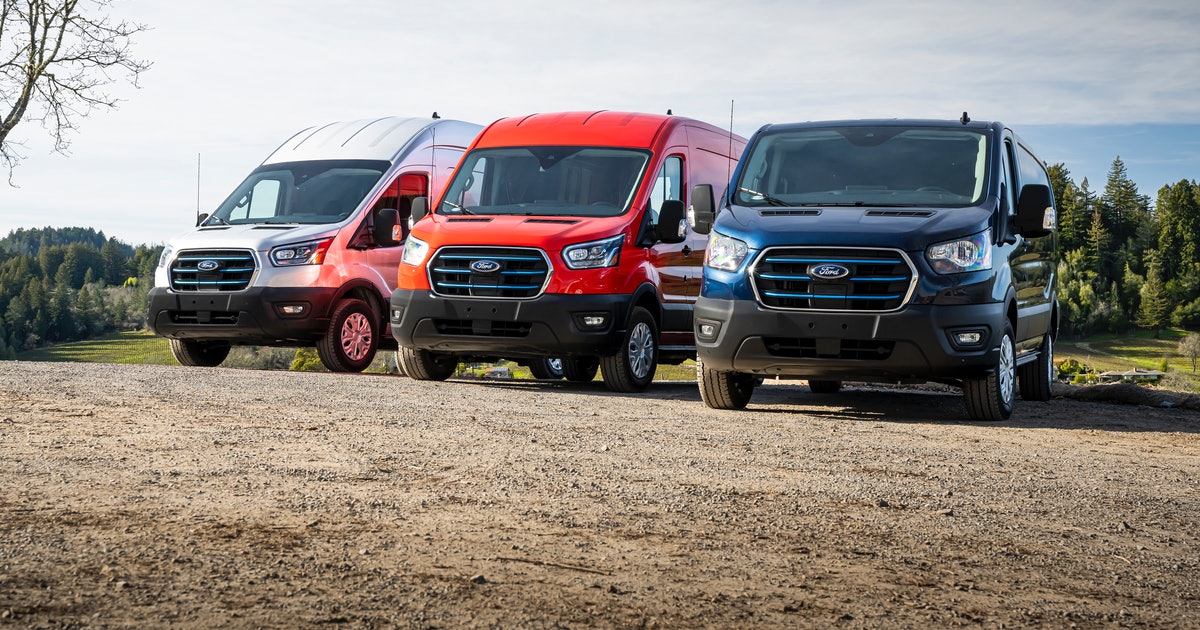 Why it could be the most significant EV ever

The Ford Transit is one of those vehicles you see all the time but don’t really notice.

Whether a cable company technician or a locksmith, plumber, electrician, baker, flower, or Amazon delivery guy, the Transit is everywhere. They’re nearly all used for business, making them prime candidates for electrification.

For years, electric cars were bought primarily by two kinds of folks: environmentalists and early adopter techies. A friend of mine once referred to his early production Tesla Model S as a “middle-aged man magnet.”

But now, finally, there are EVs for regular folks too. Ford is working on an entire lineup of them, starting with the Mustang Mach-E crossover (my Sports Car of the Year for 2021) and, soon, the Ford F-150 Lightning pickup truck.

But there’s something conspicuously missing from most discussions of light electric vehicles: business use. Tesla appears to have no interest in the commercial vehicle or fleet markets, and every other EV launched or announced in the U.S. in the past few years has been entirely consumer-focused.

My video review of the Ford E-Transit and the new Ford Pro commercial services.

Ford is going in a different direction, both with the F-150 Lightning and with my test car this week, the Ford E-Transit van.

The E-Transit is a lightly modified version of the existing Transit van. Gone is the internal combustion engine, with a rear-mounted electric motor and a 68 kilowatt-hour (usable) battery pack underneath the chassis. I suspect the whole setup is borrowed from the Mustang Mach-E, although Ford wouldn’t confirm or deny this.

Mounting the battery under the chassis is especially important because the company’s designers worked very hard to make sure all the mounting points on the frame were identical between the Transit’s internal combustion and electric versions. This is a massive deal because just about every Transit sold is modified, and it can take years for aftermarket upfitters to adjust their wares to fit a new platform.

It was also important that Ford make it easy for drivers who might switch between the E-Transit and the internal combustion Transit. Other than a quieter ride and increased low-end torque, the electric Transit drives and operates basically identically to its fossil fuel-powered sibling.

Ford did the same thing with the F-150 Lightning. The rear box is identical to the standard F-150, down to every last bolt — at least on top. Underneath, it’s completely different to accommodate for the skateboard battery, electric motors, and new independent rear suspension. Ford engineers worked hard to make sure both the Lightning and the E-Transit would work perfectly with customer equipment, and, Ford says, it will.

Commercial vehicles are particularly interesting for electrification for several reasons. First, thanks to the advent of cheap cellular connectivity, modern fleet vehicles are nearly always connected to the cloud. That means it’s easy to get data about how many miles a car is driven each day, and how long, and where it gets parked.

It turns out that knowing how far a vehicle drives and how long it’s parked are crucial for figuring out return-on-investment for electric vehicle upgrades. Though the E-Transit only sports a 106-to-126 mile range depending on configuration, Ford says that covers the daily use scenarios for a significant portion of the Transit fleet thanks to lots of market research.

If you’re a plumber in a suburban area, for example, you might drive 10 miles to one customer, then five miles to another, and so on. If you have lots of data showing your existing Transit vans never exceed 75 miles in a day, you know that the E-Transit will work for you.

The 68 kWh battery pack was chosen because it’s a reasonable balance between cost and driving range, and the E-Transit costs around $10,000 more than a comparable internal-combustion Transit. That, plus a $7,500 tax credit for buying an electric vehicle, makes the E-Transit competitive. On top of that, businesses can expect lower ongoing costs because electricity is cheaper than fuel, and because electric cars have fewer moving parts and require less maintenance, they can expect less downtime as well.

Ford has been adept at relieving the pain points of commercial electric vehicle adoption. Though everyone is familiar with refueling at a gas station, charging is a different beast.

The new Ford Pro commercial division has consultants that will work with fleet customers to analyze their current use patterns and make recommendations for where and how to recharge vehicles. Suppose their analysis shows that a bakery would need three wall-mounted chargers in the parking lot to recharge its E-Transit vans overnight. In that case, Ford has a line of cloud-connected chargers and will even roll the cost of the chargers and their installation into a larger financing package along with the vans.

Those vans can charge in public, too, thanks to the BlueOval Charging Network. That’s a loose amalgamation of charging networks like ChargePoint and Electrify America, and Ford handles all the billing and activation on the back end. Company employees won’t need to worry about having the right card or app on their phone, and they can plug in and charge up.

Ah, but what about take-home vehicles? Many commercial vans, especially in industries like telecom, are taken home by technicians at night, and they’re not going to like needing to pay for electricity. Ford Pro has a solution there too.

The vans, connected to Ford’s E-Telematics suite via an onboard cellular connection, know when they’re charging at the employee’s home, measure how much electricity is consumed, and then automatically generate the invoices so the employee can be reimbursed.

Commercial fleets typically see a 10-15 percent turnover every year, meaning this will be a slow rollout at best. And the 125-mile range means this van won’t work for many commercial customers. But this is a first-generation product and advancements, including more extended range and things like vehicle-to-grid power takeoff (think using your vehicle to power your house during an outage).

For every electric vehicle enthusiast, many more skeptics would never consider an EV. But if the company provides one, they’ll have to drive it, which makes this a big opportunity.

Vehicles like the Ford E-Transit and the Ford F-150 Lightning Pro, the fleet version of the electric pickup that starts around $40,000, will get EVs in the hands of many more users who will then discover the appeal of electrics: massive low-end torque, surprisingly excellent handling, and an always-full battery every morning, among other things.

Ford Pro has done everything it can to make EV adoption by businesses more accessible, and the company is looking at ways to bundle vehicles, charging infrastructure, and even things like real estate for charging stations into one big financing package to make it easier for businesses to justify the up-front expense of switching to electric.

I understand the environmental arguments of switching to electric vehicles, but I also understand the skeptics who don’t want to pay extra for the privilege. But if you can show a business case for the switch — and you can — it makes the EV argument significantly more compelling.

The Ford Mustang Mach-E was great, and the Ford F-150 Lightning will likely be terrific when production begins this Spring. But the Ford E-Transit is a Trojan Horse for electric vehicles, sneaking into warehouses, bakeries, the trades, and everywhere else — and as a result, it could be the most significant electric vehicle ever.

The Ford E-Transit van is in production now, and deliveries will begin later this month.

One Cool Detail: No Emissions

The Ford E-Transit is electric and has no tailpipe emissions — and no tailpipe at all. This might seem like an obvious thing to point out, but it allows for some really interesting use cases.

This is the new wine cave at Inglenook, a winery owned by famed director Francis Ford Coppola. It’s filled with more than 100 enormous stainless steel fermenting tanks, one for each individual parcel of grapes at the vineyard.

Normally, underground facilities like this can’t have vehicles inside because the fumes can cause a health hazard for workers (not to mention the wine). However, the electric E-Transit can be driven inside the cave to deliver supplies or haul out the finished product and showcases one of the countless ways that the switch to electric vehicles can change how businesses get business done.

Ford covered the travel and lodging to review the Ford E-Transit on location, as is common practice in the auto industry. Automakers or their affiliates have no oversight when it comes to Inverse editorial content, which remains wholly independent and from the brain of our extremely opinionated car analyst and critic, Jordan Golson.

The Ford Transit is one of those vehicles you see all the time but don’t really notice. Whether a cable company technician or a locksmith, plumber, electrician, baker, flower, or Amazon delivery guy, the Transit is everywhere. They’re nearly all used for business, making them prime candidates for electrification. For years, electric cars were bought…

The Ford Transit is one of those vehicles you see all the time but don’t really notice. Whether a cable company technician or a locksmith, plumber, electrician, baker, flower, or Amazon delivery guy, the Transit is everywhere. They’re nearly all used for business, making them prime candidates for electrification. For years, electric cars were bought…

Everything we know so far about the potentially record-breaking missions