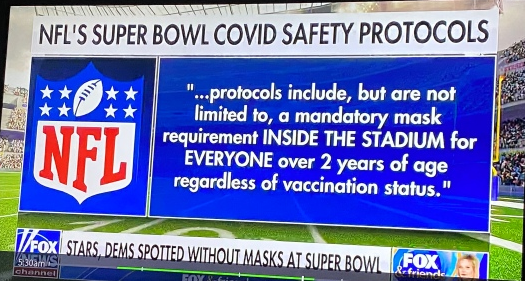 Valentine’s Monday Newsfeed: Nuttin’ But Love for Ya Plebs from “The Eternal Breath-Holder Elites” … MEH!

Being in LA, the big show game of course had a very high entitled celebrity population that insist they have all the right views and you don’t. Have the authority to preach to you on all things. Believe in the two systems in everything, from laws to masks.

In an age where the deadly CCP bio-weapons, only “The Eternal Breath-Holder Elites” prevail!
The rest of you unwashed little wankers and your school spawn mask-up!

Here’s the video of every celebrity without a mask during the Super Bowl. But every kid in California will have to be wearing them tomorrow in school. They must all be holding their breaths the entire game. pic.twitter.com/Dc9yVd7RPf

Glory be! That mayor ^^^ sure can hold his breath! He must be the leader of “The Eternal Breath-Holder Elites”!
Actually, it is also reported that the vast majority of game-goers in the stadium ignored the mask mandate by the NFL. But given the cost of ticket(s) to the event, and the corporate-type folks there too, these people were also generally, shall we say, ‘well-to-do’. Just another “Hunger Games” mentality at this game.

Twitchy: Ben Shapiro’s handy little rundown serves as a helpful reminder as to how someone like Eric Garcetti can always ‘follow The Science™’

Twitchy: Here’s a reminder that kids in Los Angeles will have to wear masks when they go to school tomorrow ‘at all times’

By the way, I noticed NBC Sports announcers skipped the chance to note hypocrisy of all the beautiful people like Sean Penn declining to wear masks inside Sofi Stadium.

Remember that the next time these Hollywood celebs lecture America at award shows.#superbowl #superbowlLVII

Over 100 million people just watched a totally normal Super Bowl in a packed indoor LA stadium of 75,000 fans with almost no one in a mask. How does any parent in the country send their kids to school in a mask tomorrow? It’s child abuse.

Oh, and from what I hear this morning, it was one of the most *BLEEPED* Superbowl halftime show to date, and Eminem took a knee during the hip-hop show. Again, ‘meh’. But Brandon thinks we plebs are too fixated on “personal freedom”, or something…

Cristina Laila: Biden Mocks “Personal Freedom” When Asked What His Message is For Americans Who Are Burnt Out by Covid Mandates (VIDEO) … Does this mean he’s putting us back in chains??

Sen. John Thune , Rep. Steve Scalise: Unmask America’s children – federal government should not be masking toddlers: A face mask may be one of the most debilitating learning barriers for young children

Stacy Lennox: The CDC Data Nobody Is Talking About Raises Urgent Questions for Bureaucrats

Eh, we had leftover meatloaf with lots of ketchup, pan-fried leftover potatoes w/ketchup, and a microwave pouch of frozen vegie medley with lima beans (DO NOT JUDGE!). Hey, gets better, y’all! We’re in the utopian Bidenville era…

They say the president doesn’t control gas/fuel prices. Meh. He certainly does with his policies. And Brandon immediately went to the Oval Office after his inauguration and doodled his siggy on the E.O.s waiting that obliterated all of Pres. Trump’s energy policies of four years that had us paying less than the price depicted of a year ago at this time.

Emma Colton: ‘CAUSE FOR ALARM’ – Biden’s economy drags US to all-time low in Heritage freedom index rating: The report ‘paints a disturbing picture, both at home and abroad,’ according to Heritage President Kevin Roberts US drops to last place in economic freedom ranking under Joe Biden

Robert Spencer: Caligula’s Horse in the Senate, Biden’s Dog in the Department of Energy: Biden’s handlers bring us to the late, decadent stage before the destruction. 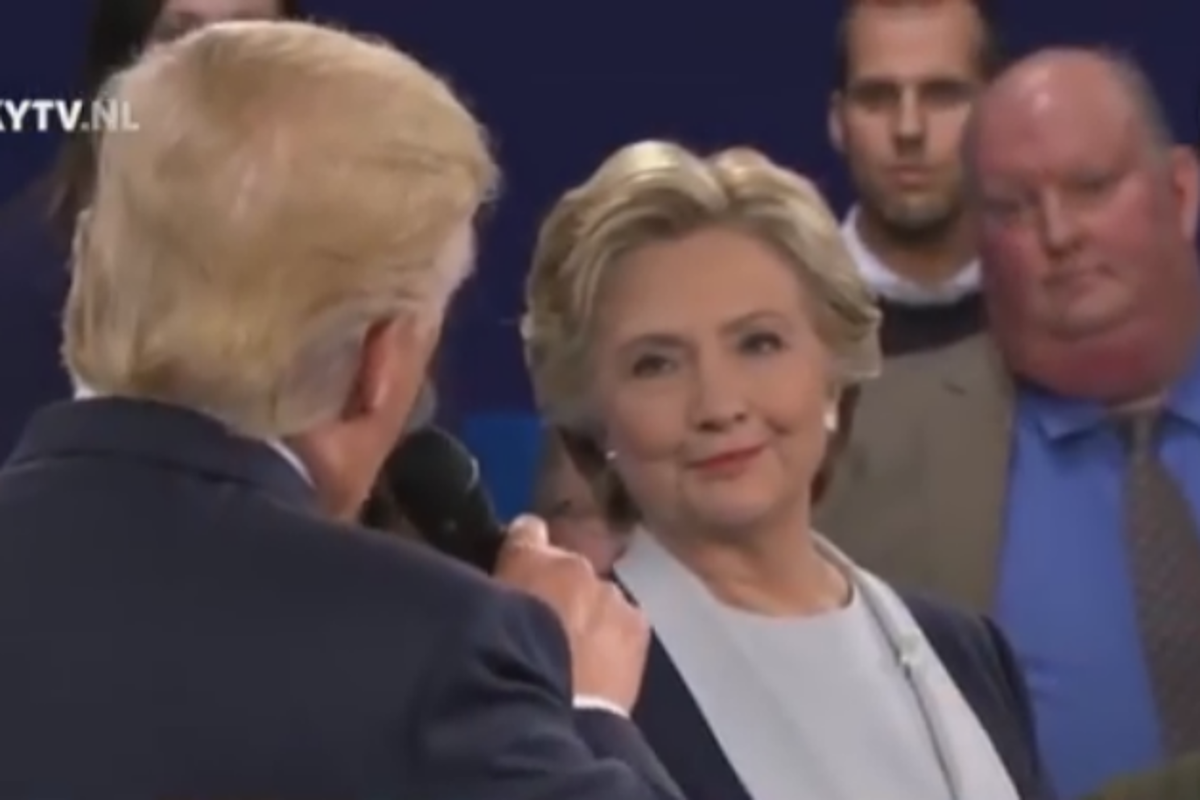 MSM is still not covering this development. Just FNC and NYP.

NYPost: Eyes turn to Hillary Clinton, not Trump in the Russiagate scandal

Durham “definitely showed that the Hillary Clinton campaign directly funded and ordered its lawyers at Perkins Coie to orchestrate a criminal enterprise to fabricate a connection between President Trump and Russia,” says Kash Patel, the former chief investigator for the House Intelligence Committee.

Of course, Hillary didn’t get what she wanted — the presidency. But her operatives didn’t stop, going on CNN to give “very concerned” interviews about a theory they knew was bull. All to undermine Trump’s presidency. It would take three years for the Mueller report to finally put the lie to rest, and we’re now, five years out, at the point where Durham is detailing the full conspiracy.

Clinton campaign paid tech workers to dig up Trump-Russia connections: Report
If this had happened to a Democrat, the press would be losing its mind. A candidate for president weaponized the nation’s Justice Department to pursue an investigation into their political opponent based on what they knew were lies. Americans were wiretapped! Some were entrapped for flimsy claims of perjury. The director of the FBI went into the Oval Office to tell the president that there was a sexual rumor floating around, so that it could be promptly leaked to the media. “Outrageous” doesn’t cover it. And still no shame from Hillary Clinton and her supporters, because it’s Donald Trump — anything is fair game to take him down.

All these things we’ve been lectured about over the past four years: Norms being broken, internet misinformation, perversion of government — it was all happening. It was the Democrats who were doing it. Think anyone in the left-wing media will notice?

No, but look for the MSM to raise the hype on the ‘Russia-Ukraine’ situation, especially if more comes out from Durham, who, by the way, mentions in the report that this current bit of info is ‘part’ of more regarding internet/electronic investigation evidence.

Meanwhile, the left is *shrugging* and saying it’s all old news … get over it. However, no crime is ‘old news’ and gotten-over if it is still being investigated and evidence/facts/truth keep coming out.

Look, let’s be real here. There is no way in hell Hillary Clinton as well as every player involved in this and all the other acts of high crimes, misdemeanors and dictionary-definition treason she has ever committed will ever be punished. Not on this earth, anyway. But it does not take away from the fact that what she and her henchmen in and out of government as well as here and even abroad did in the campaign to quite literally overthrow the nation is the greatest political crime in our now ended history, and perhaps among the greatest in world history over the past several centuries, bar none.

Even though it happened starting six years ago or even when Trump descended the Trump Tower escalator the year before that, it’s not yesterday’s news. As I just stated, the gravity of the crime/crimes stand on their own, but because of it, and because they got away with it then and will get away with it now, all of the subsequent assaults on our liberty, figurative and literal, from the Joey Soft Serve junta are the result.

Brooke Singman: Hillary Clinton 2016 tweets pushed now-debunked claim of Trump use of ‘covert server’ linked to Russia: Clinton tweet that it was ‘time for Trump to answer serious questions about his ties to Russia’

VIDEO: KT McFarland reacts to Durham alleging Clinton campaign paid to fabricate Trump, Russia link: Media was ‘in on it’

VIDEO: Rep. Jim Jordan weighs in on new evidence from the Durham investigation that the Clinton campaign paid to spy on and link Russia to President Trump. Trump-Russia infiltration ‘worse than we thought’

Daily Caller: Kash Patel, the former chief investigator of the Trump-Russia probe for the House Intelligence Committee, said the filing “definitively showed the Hillary Clinton campaign directly funded and ordered its lawyers at Perkins Coie to orchestrate a criminal enterprise to fabricate a connection between President Trump and Russia”…

Meanwhile, Obama continues his shadow government. He started during his administration, including weaponizing the FBI/DOJ for Hillary to use against Trump during the 2016 campaign cycle and as we are finding out into Trump’s presidency, and now during old Joe’s alleged administration…

Joe Hoft: More Evidence Obama Is Running the White House – Has Call with Dems in Congress Minus Senile Joe Biden

WFB: The Biden Administration Thinks You’re Stupid … and the fact-checkers actually are

Well, this is getting curiouser and curiouser…

DM: Why was Bob Saget’s death ruled an accident? Head injury was so severe it was like he’d been hit with a BASEBALL BAT, says doctor as autopsy report reveals ‘major trauma’ which ‘could NOT be caused by a slip and fall’

Twitchy: ‘SICK in the head of you, but revealing’: Mollie Hemingway DECIMATES Canadian state-sponsored media for openly trashing the word ‘freedom’

This is so sick in the head of you … but revealing

‘This, how you say in your language— this “freedom” thing?’ …
CBC “News” proving they’re as useful as the poopy-lollipop US MSM. Great work, comrades!

David Marcus: Canada truckers want freedom, not a global world where elites control their lives: The Canadian government and their lackeys in the American media have begun to play their role as strikebreakers

Our MSM is a festering brain tumor … period…

This is deadass a real thing CNN published. pic.twitter.com/CV35R69Ach

So, in a nutshell, January 6 is indeed a narrative construct in the MSM’s mind by which to replace its use of Hitler/Nazi for everything and has become completely useless as well.

Lauren Green: After-school ‘Satan Club’ takes new aim at archenemy: Christian clubs for kids: The Satanic Temple is fighting against Christian-focused after-school clubs — and children are in the crosshairs (w/VIDEO)

TCF: University advises staff on ‘neopronouns’ such as emojis and … ‘catgender’ … It really does take some serious mental bending/twisting/knotting to accept the extreme level of college student loan debt this country is in.

Being in LA, the big show game of course had a very high entitled celebrity population that insist they have all the right views and you don’t. Have the authority to preach to you on all things. Believe in the two systems in everything, from laws to masks. In an age where the deadly CCP bio-weapons, only “The…

Being in LA, the big show game of course had a very high entitled celebrity population that insist they have all the right views and you don’t. Have the authority to preach to you on all things. Believe in the two systems in everything, from laws to masks. In an age where the deadly CCP bio-weapons, only “The…

Friday Newsfeed: The Marxist Primates are Hosing the Rest of Us