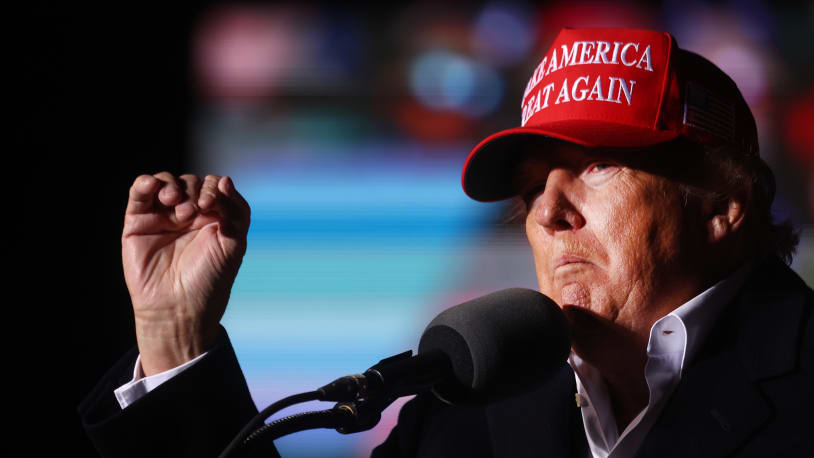 Trump lost, but his tactics keep on winning

Longtime Republican bigwig and former hedge fund CEO Dave McCormick once seemed to be at least Never-Trump adjacent, though perhaps not fully Never-Trump.

A few weeks after the Jan. 6 insurrection, for example, he suggested it was time for his party to find its way back from the violent depths to which it had descended. “You have to start with the recognition that what we saw at the Capitol was just horrific and will be a dark chapter in American history,” McCormick said in comments recently unearthed by The Bulwark, “and something … hopefully will wake us all up to the need for being able to bring our disagreements together and find unity and agreement.” Former President Donald Trump, he said, had “a lot of responsibility” for the nation’s divisions.

McCormick is now running for the GOP nomination for U.S. Senate in Pennsylvania. On Sunday, he aired a “Let’s Go Brandon” ad during the Super Bowl.

So much for unity and agreement.

Granted, McCormick isn’t the first politician — of either party — to talk of unity and civility while spending money on negative ads. And he’s far from the only establishment Republican to have once decried the insurrection only to try to get cozy with the party’s insurrection-friendly base.

His ad arrived at an interesting time, though, when America’s political media and a few Republicans are once again searching desperately for new signs that Trump might at last be faltering politically. On Sunday, The New York Times examined how Senate Minority Leader Mitch McConnell (R-Ky.) and former President George W. Bush have pushed for old-school establishment Republicans — folks like Govs. Doug Ducey of Arizona, Larry Hogan of Maryland, and Chris Sununu of New Hampshire — to run for the Senate and block Trumpier candidates. Similarly, The Washington Post detailed how Trump-backed candidates are lagging their GOP rivals in fundraising and polling numbers, and noted that the former president isn’t nearly as visible as he once was. It’s suddenly pretty easy to find talk about Trump’s weaknesses and what they might mean.

“People aren’t necessarily seeing his messaging as much,” an unidentified Republican told the Post. “They just say he’s not on Twitter; they don’t really know what he’s doing.” Maybe, just maybe, there’s a chance to throw a bucket of water on the Wicked Witch.

There’s a wishful thinking quality to all of this. Poll after poll, after all, shows that Trump is still the frontrunner for the 2024 GOP presidential nomination, and it’s not particularly close. And if Trump’s Senate picks aren’t doing terribly well right now, neither are McConnell’s: Hogan and Sununu have already declared they won’t run, and Ducey will probably do the same despite favorable polling. It’s possible Trump no longer possesses the political strength he once did, but he’s still the most formidable force within the Republican Party.

Even if Trump is stumbling, however, it might not matter all that much. McCormick’s Super Bowl ad is one more piece of evidence that Trumpism is here to stay.

That’s a bit of a surprise, because Trumpism has always seemed so wrapped up in the person of Trump himself, centered on his particular obsessions, grievances, and short attention span. In 2017, Jane Coaston wrote at National Review that “there is no such thing as Trumpism” because Trump’s agenda was so devoid of actual content. Trump’s statements “were largely reflections of whatever he thought would be popular at the precise moment he made them,” she observed, which made “Trumpism” a cobbled-together act of projection by his fans and hangers-on.

But that’s not quite right, at least not anymore.

Trumpism, it turns out, is less a set of ideas about the common good and more a set of tactics for attaining power from the right. There are several elements: A little bit of cruelty, a bunch of “flooding the zone” with lies and misinformation, and — perhaps most importantly — a ton of showmanship. Shows of utter loyalty to Trump himself are also critical, obviously. These are old methods, but the former president put a fresh and potent spin to create something new with them. In the absence of an actual governing agenda, GOP candidates can still ape his style. That’s Trumpism.

And this is what Trumpism without Trump looks like: It’s Dave McCormick, pitching himself to Pennsylvania Republicans with a vulgar euphemism. It’s Florida Gov. Ron DeSantis (R) embracing a “don’t say gay” law for his state’s public schools. It’s Fox host Tucker Carlson emerging as a possible presidential candidate only because he’s so fantastic at being angry on TV. It’s GOP candidates falsely crying fraud every time they lose an election. It’s mean and loud and crass and has only a passing acquaintance with the truth — and it gets good ratings.

Trump himself could leave the scene tomorrow, and all these things would still be true. Maybe the former president is finally losing his touch with GOP voters, but probably not. It doesn’t really matter. Trumpism is doing just fine.

Longtime Republican bigwig and former hedge fund CEO Dave McCormick once seemed to be at least Never-Trump adjacent, though perhaps not fully Never-Trump. A few weeks after the Jan. 6 insurrection, for example, he suggested it was time for his party to find its way back from the violent depths to which it had descended. “You have…

Longtime Republican bigwig and former hedge fund CEO Dave McCormick once seemed to be at least Never-Trump adjacent, though perhaps not fully Never-Trump. A few weeks after the Jan. 6 insurrection, for example, he suggested it was time for his party to find its way back from the violent depths to which it had descended. “You have…

Was it worth it, Mike Pence?