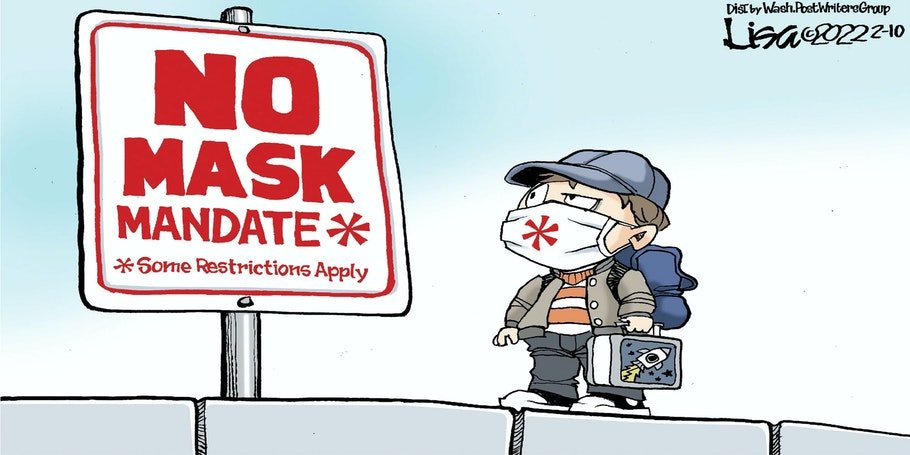 The Pandemic of Gov’t Failure

Medical professionals, politicians, and the media all failed to play it straight about COVID.

Anyone watching the news in recent days can’t help but notice a dramatic shift in the tone and messaging about COVID. Mark Alexander predicted this pivot last month.

The same journalists, political analysts, and evening news anchors who’ve been telling us for two years that mask and vaccine dictates are good for us are changing their tune. And the same politicians who’ve shut down our schools, churches, and businesses are announcing that it’s time to end the mandates.

With the midterm elections just nine months away, and polling showing a conservative and independent backlash against the totalitarian Left, suddenly masks and booster shots are yesterday’s news.

Political analyst Stephen Kruiser quips, “The Democrats have been pivoting so forcefully on various COVID-related things this past week that I’m surprised they aren’t all dizzy and nauseated.”

“They’ve been trying to erase the memory of their previous, horribly wrong policies,” he adds. “Of course, their dutiful flying monkeys in the mainstream media have been working overtime to help.”

For more than two years we’ve seen government mandates that shuttered family businesses, told people of faith it was against the law to sing together in church, took children out of schools and put them on Zoom for six hours a day, and even banned people from having cookouts or walking on the beach.

They told us to shut up and trust the science. Sorry, Science™.

Americans get the politics of it, but it’s shameless for those who wield power to suddenly pretend what we’ve been put through over the past two years never happened. Then again, the overnight pivot of those in government, health, and media are proving an important point: The COVID response was a failure, and lies eventually crumble in the face of truth.

Even more appalling, the very people responsible for the failure are now claiming victory.

In a must-read column, economist Stephen Moore highlights a laundry list of blunders in the federal response to COVID. “The tally for how much the federal government spent to combat COVID-19 is now estimated to be $5 trillion,” he says. “It is more than the combined costs of World Wars I and II. The left is celebrating that politicians in Washington saved us. Really? From what exactly?”

One of those charlatans and opportunists who claimed to be saving us is Dr. Anthony Fauci, the nation’s highest-paid bureaucrat and Donald Trump’s biggest blunder.

In the early weeks of the pandemic, Fauci said we didn’t need masks and we shouldn’t be worried about COVID any more than the seasonal flu. Indeed, most experts once agreed that masks do little good against viral spread.

Moreover, as political analyst Michael Brendan Dougherty writes: “Credible scientific evidence that outdoor transmission of the coronavirus was negligible was available late in the spring of 2020, even as newspapers were still shaming people about being on beaches and a solo paddleboarder was arrested in California. But CDC guidance on outdoor activities and outdoor mask-wearing didn’t change for a year.”

Dougherty adds, “Fauci has been the face of this shape-shifting consensus, even at its most ridiculous.”

But it’s hard to let go of power, and some on the Left are going to milk this for as long as they can get away with it.

In fact, Psaki is making it clear the Biden administration isn’t quite ready to pivot, but is holding on to the status quo, leaving the president to lead from behind.

Ultimately, Wolensky and Psaki will get the memo that’s been sent out to Democrats and their media minions to return to normal.

Even Fauci now recognizes that mandates are a thing of the past. According to The Hill, Fauci said this week that “he hopes all COVID-19 restrictions will be halted in the coming months as well, citing mandatory mask-wearing as one of the restrictions he expects to end … in 2022.”

You know the jig is up when the spin doctor says it’s time to end the mandates.

The lives of every American are worse today because of incompetent, power-hungry politicians, bureaucrats, and medical professionals who used a virus as an opportunity to tell the rest of us it was too dangerous to live in a free society.

We’ve learned a lot since 2020. Let’s hope the American people never allow their government to get away with something like this again.

By BRIAN MARK WEBER February 11, 2022 in Government Medical professionals, politicians, and the media all failed to play it straight about COVID. Anyone watching the news in recent days can’t help but notice a dramatic shift in the tone and messaging about COVID. Mark Alexander predicted this pivot last month. The same journalists, political analysts, and…

By BRIAN MARK WEBER February 11, 2022 in Government Medical professionals, politicians, and the media all failed to play it straight about COVID. Anyone watching the news in recent days can’t help but notice a dramatic shift in the tone and messaging about COVID. Mark Alexander predicted this pivot last month. The same journalists, political analysts, and…

Inflation Is a Biden-Caused Disaster