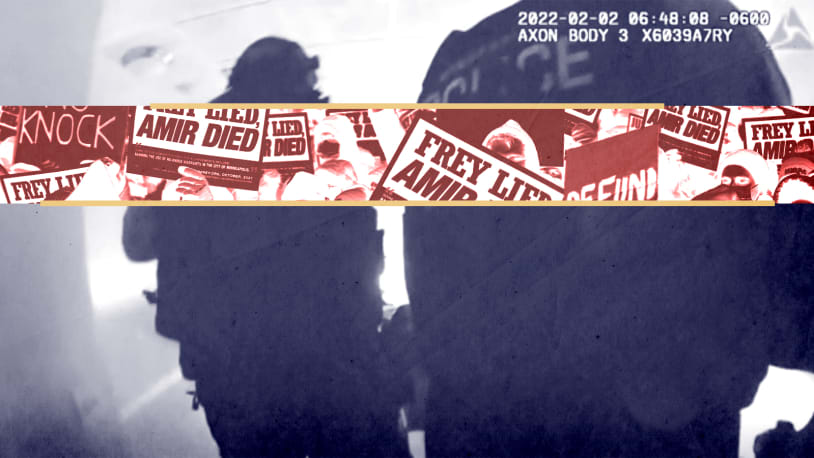 Another high-profile police-related death has rocked Minneapolis, once again thrusting the Twin Cities — and the authorities’ use of controversial no-knock search warrants — into the spotlight. Here’s everything you need to know.

Early morning on Wednesday, Feb. 2, the Minneapolis SWAT team entered an apartment at the Bolero Flats in downtown Minneapolis. The authorities were acting on a no-knock search warrant in connection with a January homicide in St. Paul, and gained entrance to the unit with a fob, according to the Minneapolis Police Department.

After announcing their presence upon entry, the police then encountered a man — now identified as 22-year-old Amir Locke — “huddled under a blanket” on the couch holding a handgun, which his family says was legally registered (Locke reportedly worked as a DoorDash driver, and bought the gun for protection against an increase in carjackings). According to the MPD report, Locke’s gun was pointed “in the direction of the officers,” though in since-released body camera footage it’s unclear if that was the case. SWAT team member Mark Hanneman then shot the clearly-startled Locke.

“They loudly and repeatedly announced ‘police search warrant,’ before they crossed the threshold into the apartment, and ongoing as they made entry,” interim Police Chief Amelia Huffman said of authorities during a news conference. “Just over nine seconds after they had made entry into the apartment, the officers encountered a male who was armed with a handgun. He was holding that gun in his hand at the time that shots were fired.”

Officers then carried Locke, who is Black, outside to be tended to by paramedics. He later died at the hospital, per the Star Tribune.

Notably, Locke was not named in the MPD’s search warrant, nor was he a suspect in the connected homicide investigation.

“Amir was an innocent young man … who is now the latest statistic and victim of the dangerous and intrusive no-knock warrant techniques that must be banned,” said civil rights attorney Ben Crump, who is leading the legal team representing the Locke family.

The graphic body camera footage from the shooting was released to the public on Feb. 3, per Minneapolis’ KMSP, and also appears to contradict Police Chief Huffman’s claim that police officers announced themselves before crossing the threshold of the apartment.

At the time of his death, Locke was one week away from moving to Dallas to pursue a career in music.

Have there been any arrests?

On Feb. 8, prosecutors charged 17-year-old Mekhi Speed — Locke’s cousin — with two counts of second-degree murder in the Jan. 10 shooting death of 38-year-old Otis Elder in St. Paul. Locke was killed as the MPD carried out no-knock raids on three apartments to which Speed was believed to have access, including one he lived in.

Officers began to look for Speed on Jan. 24, and found him on Feb. 6 in Winona, per the Star Tribune.

Said Locke’s family in a statement: “We are aware of the recent reports of an arrest and the charging of a teenager in connection with the warrants executed at the Bolero Flats. We can confirm that the charged teenager is Amir Locke’s cousin. His cousin was not present in Unit 701, where the no-knock warrant and Amir were both executed.”

How has the public responded?

Protests began almost immediately and continued throughout the weekend and beyond, as demonstrators took to the streets to demand an end to no-knock warrants and the resignations of both Huffman and Minneapolis Mayor Jacob Frey.

The Saturday demonstration, which was peaceful, came after a Friday night protest “in which a caravan of vehicles blocked traffic,” writes The New York Times. Crowd members held signs that said things like, “Frey Lied, Amir Died,” and “Stop the War on Black America!“

The fury continued into Sunday night, as yet another car caravan traveled through the city, stopping outside what is believed to be Huffman’s home, reports CBS News.

On Monday, protesters arrived at City Hall, where they urged Frey to fire Huffman, as well as Hanneman, the officer who shot Locke. And on Tuesday, hundreds of students at St. Paul’s Central High School rallied outside their building for a protest organized by the Black Student Union and the nonprofit Minnesota Teen Activists. Several other high schools and middle schools participated, according to local WCCO.

What’s the deal with these “no-knock” warrants?

The subject of protesters’ ire, no-knock warrants are “often used by law enforcement agencies to surprise suspects that might otherwise be confrontational or mitigate the risk of potential evidence destruction,” KMSP writes. They are also “historically dangerous for police officers and residents,” CNN adds, per Founder of the Criminal and Juvenile Defense Clinic Rachel Moran; between 2010 to 2016, for example, “at least 94 people were killed in the United States as a result of no-knock warrants,” Moran told CNN.

In Minnesota, police must prove the need for a no-knock warrant (rather than a typical “knock and announce” warrant), and two higher-ups in the agency must sign off on the warrant’s execution before officers can move forward.

Mayor Frey issued a moratorium on no-knock warrants in Minneapolis two days after the Wednesday shooting, but many were confused — weren’t these warrants already prohibited? Turns out, not exactly. Though Frey had previously enacted restrictions, no-knock warrants were never explicitly banned.

In Nov. 2020, following a summer of racial justice protests, Frey instituted a policy requiring officers to, in most situations, “announce their presence and purpose before entering a building.” There was, however, an exception for “special circumstances,” CNN writes. On Monday, Frey said the discrepancy in understanding was his fault for not using clear enough language. He noted that when he was re-elected in 2021, some of his campaign statements on the subject were, in fact, misleading, and not nuanced enough.

Despite the new moratorium (which still allows for no-knock warrants in certain cases, such as hostage or domestic violence situations), Locke’s family, protesters, and activists want to see a change to the practice immediately.

“This is an epic failure policy,” said Crump, “and that failed policy killed Amir Locke just as surely as the bullet that pierced his body.”

The warrants also came under fire following the death of 26-year-old Black woman Breonna Taylor, who was killed during a botched no-knock drug raid.

Then, in December, former officer Kim Potter was found guilty of manslaughter after having fatally shot 20-year-old Daunte Wright, a Black man, during a routine traffic stop in April. Potter says she mistook her gun for her taser.

February 12, 2022 February 12, 2022 Another high-profile police-related death has rocked Minneapolis, once again thrusting the Twin Cities — and the authorities’ use of controversial no-knock search warrants — into the spotlight. Here’s everything you need to know. What happened? Early morning on Wednesday, Feb. 2, the Minneapolis SWAT team entered an apartment at…

February 12, 2022 February 12, 2022 Another high-profile police-related death has rocked Minneapolis, once again thrusting the Twin Cities — and the authorities’ use of controversial no-knock search warrants — into the spotlight. Here’s everything you need to know. What happened? Early morning on Wednesday, Feb. 2, the Minneapolis SWAT team entered an apartment at…

Not everything is about Nazis