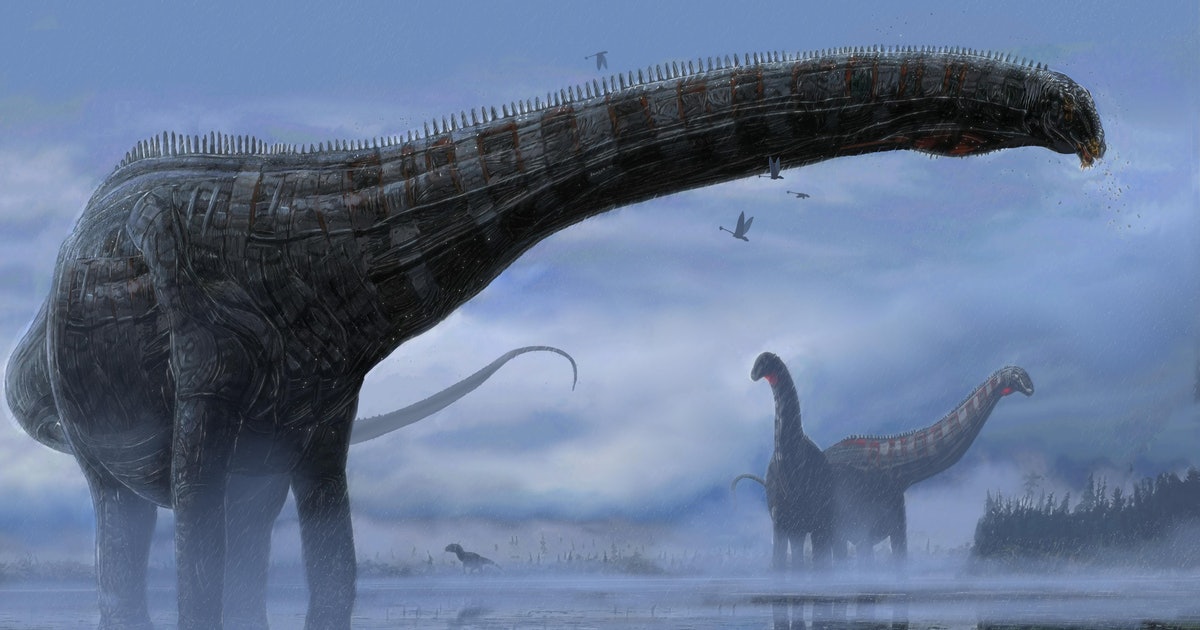 Once upon a time, there lived a dinosaur named Dolly. She was a long-necked, herbivorous sauropod. One day, Dolly got sick with a mysterious respiratory infection. Unfortunately, she wouldn’t get a diagnosis for another 150 million years.

In 2018, then Ph.D. candidate Cary Woodruff went to an excavation site in Boseman, Montana to study sauropod fossils. He noticed something strange about one of the vertebrae he was examining.

This bone happened to be connected to a piece of the soft pulmonary tissue that made up Dolly’s respiratory system. In sauropods, these bones have holes called pleurocoels (pronounced “pluri-seal”) that abut the soft tissue for easy breathing. Typically, they are smooth and perfectly round, but Dolly’s were quite irregular. So, Woodruff took to Twitter and Facebook noting an anomaly in the bone shape and asking for input.

His social media post kicked off research that has culminated in a paper published in the journal Scientific Reports. He found that Dolly whose namesake is iconic musician Dolly Parton. (its scientific name is MOR 7029) likely had a pneumonia-like respiratory illness called airsacculitis, which still afflicts modern chickens (and can be fatal if not treated), making this one of the first discoveries of a dinosaur with a respiratory infection, and the first discovery of a non-avian dinosaur to have had an avian respiratory infection.

What’s new — This is one of the first observed cases of respiratory infection in a dinosaur, and certainly the first instance of an avian infection in a non-avian dino. What Woodruff actually found was a bone affected by a secondary infection caused by the airsacculitis. Amazingly, he and his team were able to deduce this without any actual soft tissue.

“Even though we don’t have any of the preserved lung and respiratory tissue, the fact that there are all these traces that tells us a lot about the anatomy of these dinosaurs, just from this weird abnormal bony outgrowth,” he says.

Soft tissue’s decay can make studying illnesses in dinosaurs — what’s known as paleopathology — quite difficult, and underscores the weight of this finding. “The fact of where this infected bone in Dolly, we know it’s actually at the junction between where respiratory tissue would actually pervade into the bones in these dinosaurs, and only there,” Woodruff says. The infection left a sort of “fingerprint” on the bone, Woodruff describes.

Woodruff tweeted a picture of Dolly’s fossil in an effort to cast a wide net for answers.

However, Woodruff and his team have some clues. They observed that what they saw in Dolly resembled a contemporary respiratory infection in birds that is typically caused by inhaling fungal spores.

The wrench in this thought is that the fungus aspergillus is only about 40 million years old, so it wouldn’t have been floating around as Dolly tromped the Earth.

For Woodruff, there’s also a unique personal connection. “You could relate to how that animal was suffering and know that you felt just as crummy when you were sick as Dolly was and that you guys over a span of 150 million years shared the same symptoms,” he says. “I have yet to come across another fossil that I’ve been able to make that connection with.”

Digging into the details — Upon posting the picture, suggestions flooded Woodruff’s inbox.

“Immediately a bunch of paleontologists responded and the group answer basically was, ‘Holy crap, this has got to be a respiratory infection,’” Woodruff recalls.

About the same time that Woodruff and his team began presenting their respiratory infection findings, another paper published in 2021 came out examining a rib from another sauropod in Brazil that indicates it may have had tuberculosis. Hence, the distinction; though it still makes Dolly one of the first discovered cases of a respiratory infection in a dinosaur.

What’s next — Woodruff calls this paper on Dolly’s respiratory infection “the cherry on top” of his research on the specimen. The much larger study looks at what kind of dinosaur Dolly actually was. At first, Woodruff thought Dolly was a type of sauropod called a diplodocus, hence the alliterative nickname. It turns out Dolly is a new kind of sauropod entirely, which will be detailed in a forthcoming paper from Woodruff and his team — including a new genus-species name (that Woodruff confirmed is not named for Dolly Parton).

As nicknames of Woodruff’s future specimens?

Once upon a time, there lived a dinosaur named Dolly. She was a long-necked, herbivorous sauropod. One day, Dolly got sick with a mysterious respiratory infection. Unfortunately, she wouldn’t get a diagnosis for another 150 million years. In 2018, then Ph.D. candidate Cary Woodruff went to an excavation site in Boseman, Montana to study sauropod…

Once upon a time, there lived a dinosaur named Dolly. She was a long-necked, herbivorous sauropod. One day, Dolly got sick with a mysterious respiratory infection. Unfortunately, she wouldn’t get a diagnosis for another 150 million years. In 2018, then Ph.D. candidate Cary Woodruff went to an excavation site in Boseman, Montana to study sauropod…

SPACE: “The time was fast approaching when Earth, like all mothers, must say farewell to her children.” ― Arthur C. Clarke