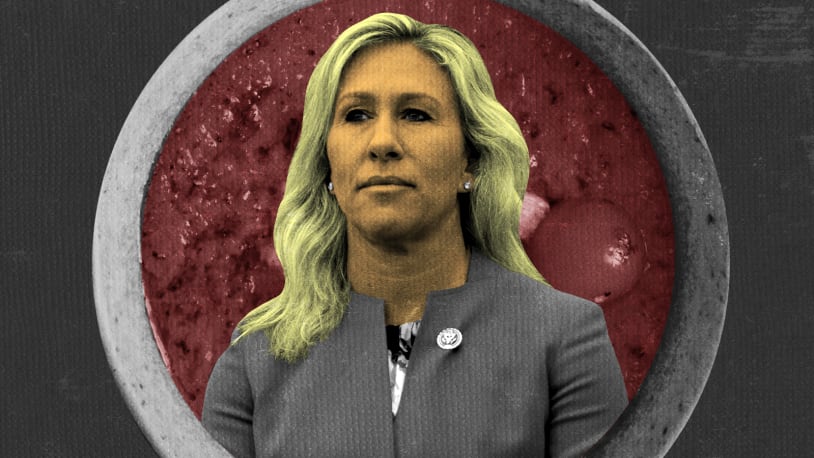 Not everything is about Nazis

Did you order the gazpacho? Or were you hoping for vichyssoise? That’s just one of the many jokes provoked by the latest gaffe by Rep. Marjorie Taylor Greene (R-GA). In an interview on Wednesday with the right-wing One American News Network, Greene denounced “Nancy Pelosi’s gazpacho police” — a reference to allegations that the Capitol Police improperly investigated members of Congress. By the end of the day, Greene herself got into the Soup Nazi act, tweeting, “No soup for those who illegally spy on Members of Congress, but they will be thrown in the goulash.”

The stakes were minute even by the standards of social media controversy. Surveying the responses, it’s hard to avoid the impression that Greene’s critics thoroughly enjoyed the diversion from their real jobs. Still, the timing, just a few weeks after related spats about Whoopi Goldberg and the removal of the graphic novel Maus from a Tennessee middle school curriculum, points toward a more serious question. Do Americans know enough about the Holocaust and the Nazi regime?

Surprisingly, the answer may be yes. As Yair Rosenberg reports in The Atlantic, Americans are well-informed on the topic. According to a 2020 Pew study:

When asked to describe in their own words what the Holocaust was, more than eight-in-10 Americans mention the attempted annihilation of the Jewish people or other related topics, such as concentration or death camps, Hitler, or the Nazis. Seven-in-10 know that the Holocaust happened between 1930 and 1950. And close to two-thirds know that Nazi-created ghettos were parts of a city or town where Jews were forced to live. [Pew]

The results aren’t all good news. The report also found:

Fewer than half of Americans (43 percent) … know that Adolf Hitler became chancellor of Germany through a democratic political process. And a similar share (45 percent) know that approximately 6 million Jews were killed in the Holocaust. Nearly three-in-10 Americans say they are not sure how many Jews died during the Holocaust, while one-in-10 overestimate the death toll, and 15 percent say that 3 million or fewer Jews were killed. [Pew]

Still, public knowledge of the Holocaust is far better than almost any aspect of American history or politics. While more than 80 percent display some understanding of the Holocaust, majorities are unable to identify basic constitutional structures or major figures and events. As I’ve noted before, this isn’t a new problem. Evidence of widespread civic ignorance goes back as far as we have systematic data.

Rosenberg argues that Americans’ relatively strong knowledge of the Holocaust and the omnipresence of analogies to the Third Reich is an educational success story. I’m not so sure.

For one thing, public awareness of the Holocaust is probably not the result of formal teaching. A recent study by the American Historical Association found the top sources for information about the past were TV and film. Even non-classroom educational settings, such as museums, were far less popular. It’s a limitation of the survey that it didn’t consider K-12 schools, where all students receive at least some history instruction. But it’s not unreasonable to think that the dominant influence is Hollywood, where Nazis have served as all-purpose villains for more than 75 years.

Whatever its cause, moreover, disproportionate attention to the Holocaust is intellectually distorting. Nazis atrocities must never be forgotten. But there’s something wrong when they’re just about the only things Americans know about Jewish or European history, both of which include ample evidence of the best human capacities as well as the worst. Nor is there anything to celebrate when Americans are much better acquainted with foreign events than with our own past, which includes its horrors as well as its triumphs.

The neglect of other events, periods, and regions has damaging political consequences, too. Greene and other populist opponents of COVID restrictions have been rightly criticized for comparing mask requirements or vaccine mandates to Nazi policies. But American thinking on foreign policy is seriously distorted by the respectable habit of identifying every authoritarian ruler as another Hitler and every territorial dispute as a second Munich. Historical analogies are a valuable tool of political reasoning. But they don’t work if you only know one case for comparison.

Foreign policy isn’t the only area where our obsession with Nazis is an obstacle to clear thinking. During riots in the summer of 2020, progressives denounced federal agents deployed to protect courthouses and other government installations as Trump’s equivalent to “Brown shirts [sic].” There were legitimate concerns about violations of civil liberties, but it’s not fascism to try to stop violent attacks on public property.

To be fair, the denunciation of heavy-handed law enforcement as Nazi-like oppression isn’t limited to the left. In 1995, an infamous NRA mailing described ATF and FBI personnel in the siege of the Branch Davidian compound in Waco, Texas, as “jack-booted government thugs, federal agents wearing Nazi bucket helmets and black storm trooper uniforms to attack law-abiding citizens.” There’s considerable evidence that the authorities catastrophically bungled the situation, leading to the deaths of four ATF agents and a total of 82 Branch Davidians (including more than 20 children). But the main reason was a very American combination of bureaucratic incompetence and militarized tactics — not cold-blooded murder justified by an ideology of dominance.

Greene’s gazpacho gaffe is funny, but these situations are no laughing matter. And it’s not crazy to worry that misplaced Nazi rhetoric makes it harder to discuss public health, public safety, or anything else. But the answer isn’t to make the Holocaust even more central to classroom education, popular culture, or political discourse. Paradoxically, we might understand more if we talked about it less.

Did you order the gazpacho? Or were you hoping for vichyssoise? That’s just one of the many jokes provoked by the latest gaffe by Rep. Marjorie Taylor Greene (R-GA). In an interview on Wednesday with the right-wing One American News Network, Greene denounced “Nancy Pelosi’s gazpacho police” — a reference to allegations that the Capitol…

Did you order the gazpacho? Or were you hoping for vichyssoise? That’s just one of the many jokes provoked by the latest gaffe by Rep. Marjorie Taylor Greene (R-GA). In an interview on Wednesday with the right-wing One American News Network, Greene denounced “Nancy Pelosi’s gazpacho police” — a reference to allegations that the Capitol…