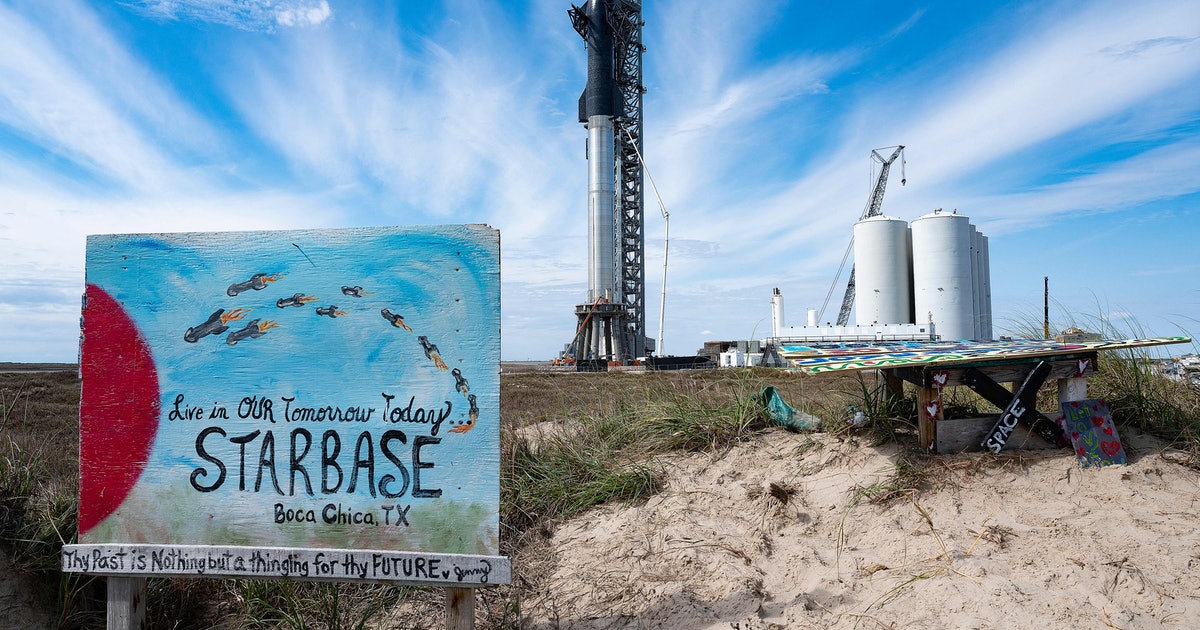 The Starship, SpaceX’s under-development rocket, looks set to impress — at least from the pictures. At the company’s Starbase facility in Texas Thursday night, CEO Elon Musk detailed a series of key updates on his most enterprising rocket to date, including a new video of the Starship in action. The new ship is key to helping Musk achieve one of his most ambitious goals: Establishing a human settlement on Mars.

The video illustrates one of SpaceX’s most ambitious goals. It shows the fully-reusable ship and booster lift off from a spaceport on Earth; the booster returns to Earth with the chopsticks-like “Mechazilla” catching it, while the ship continues to Mars and lands at a settlement. Musk’s goal is to establish a million-strong, self-sustaining city by 2050. Ambitious to say the least.

Watch the video below:

At Thursday’s event, Musk described three lofty goals he wanted from the project: Establish humanity as a multi-planet species, enable humans and other Earth-bound creatures to avoid extinction in case Earth implodes, and, of course, inspire humanity and give meaning to life.

In a reference to Hitchhikers’ Guide to the Galaxy, Musk explained:

“What’s the meaning of life? 42. But what’s the question? And if we go out there and we explore the galaxy, ultimately, then we can find out some of these questions, and it would be very exciting to do that.”

Want to find out more about SpaceX’s plans for the Mars city? Subscribe to MUSK READS+ for exclusive interviews and analysis about spaceflight, electric cars, and more.

Here’s what we learned at the event, which didn’t completely correlate with Musks’ ambitious goals and the timeline for achieving them.

Musk reiterated that the specifications are still being finalized. As it stands, the booster measures 69 meters (226 feet) and the ship 50 meters (164 feet) to make a 119-meter (390-feet) tall construction. The ship itself has around 1,200 tons of propellant, and a thrust of around 1,500 tons. The diameter of nine meters or 30 feet will stay around the same.

The ship will send around 100 to 150 tons into space at a time, depending on the orbit. For orbital refilling, where a second Starship stays in space and refills a ship to complete the trip to Mars, Musk estimates the ship could carry 200 tons of payload.

2 — …but the current specs are impressive

The Super Heavy booster enables the Starship to break new records if all things go well. It has a propellant capacity of around 3,400 tons, with the potential to expand to 3,800 tons. The booster features 33 engines, a figure that has varied during development between 29 and 37 engines. It has a thrust of around 7,600 tons, or 17 million pounds of thrust, which will likely increase over time.

To put that in perspective with the Saturn V, the rocket that sent humans to the Moon, that ship had thrust of around seven and a half million pounds. To this day, the Saturn V remains the most powerful rocket to ever fly — which means the Starship’s booster has the potential to help it beat that record by a wide mile.

3 — It will use the world’s largest heat shield

The ship will use what Musk described as the world’s largest heat shield. This will protect the ship as it enters Mars’ atmosphere at speeds of around 17,000 mph. Perseverance, NASA’s latest Mars rover, reached temperatures of around 2,400 degrees Fahrenheit when it landed on Mars.

Musk declared that the second-generation Raptor would greatly improve over its predecessor. It would offer 230 tons of thrust instead of the 185 tons of its predecessor, with the potential to reach 250 tons over time. It also costs around half as much to build, thanks to a simplified design.

“The two things that occupy the most number of mental cycles are Raptor 2 and Tesla Full Self-Driving,” Musk said. “The only remaining issue that we’re aware of is melting the chamber.”

In other words, the engine’s chamber is under such intense heat it’s likely to melt at any point — Musk claimed the heat energy is on the order of a gigawatt.

Musk said the team was “close” to having the hardware ready to go for the first orbital flight. SpaceX requires the Federal Aviation Administration to complete its environmental assessment, currently expected for the end of this month. Musk expected the two to finish “around the same time.”

If SpaceX encounters issues in the assessment, Musk noted that the company has already received approval to fly Starship out of Cape Canaveral instead. If the flight gets delayed by four to eight months, Musk would consider building up the launch tower at Cape Canaveral and flying from there instead.

The setback wouldn’t be the first. In September 2019, Musk said an orbital flight could take place in a matter of months. In August 2021, he claimed the ship could be ready for flight “in a few weeks, pending only regulatory approval.” It could still take some time before we actually see an orbital flight.

6 — He has big plans for Starship

Starship is perhaps SpaceX’s most ambitious project yet, but Musk indicated that there’s more to announce later.

Musk outlined a series of previously-announced missions. That included a series of launches for the Starlink internet constellation, the upcoming NASA Artemis mission to the Moon, and the planned flight around the Moon with Japanese billionaire Yusaku Maezawa.

“There’s going to be some future announcements that I think people will be pretty fired up about,” he said.

SUBSCRIBE TO MUSK READS+, A PREMIUM NEWSLETTER THAT COVERS THE WORLDS OF ELON MUSK, SPACEX, TESLA, AND EVERYTHING BETWEEN

The Starship, SpaceX’s under-development rocket, looks set to impress — at least from the pictures. At the company’s Starbase facility in Texas Thursday night, CEO Elon Musk detailed a series of key updates on his most enterprising rocket to date, including a new video of the Starship in action. The new ship is key to…

The Starship, SpaceX’s under-development rocket, looks set to impress — at least from the pictures. At the company’s Starbase facility in Texas Thursday night, CEO Elon Musk detailed a series of key updates on his most enterprising rocket to date, including a new video of the Starship in action. The new ship is key to…

Astronomers found one of the lightest exoplanets in Earth’s backyard