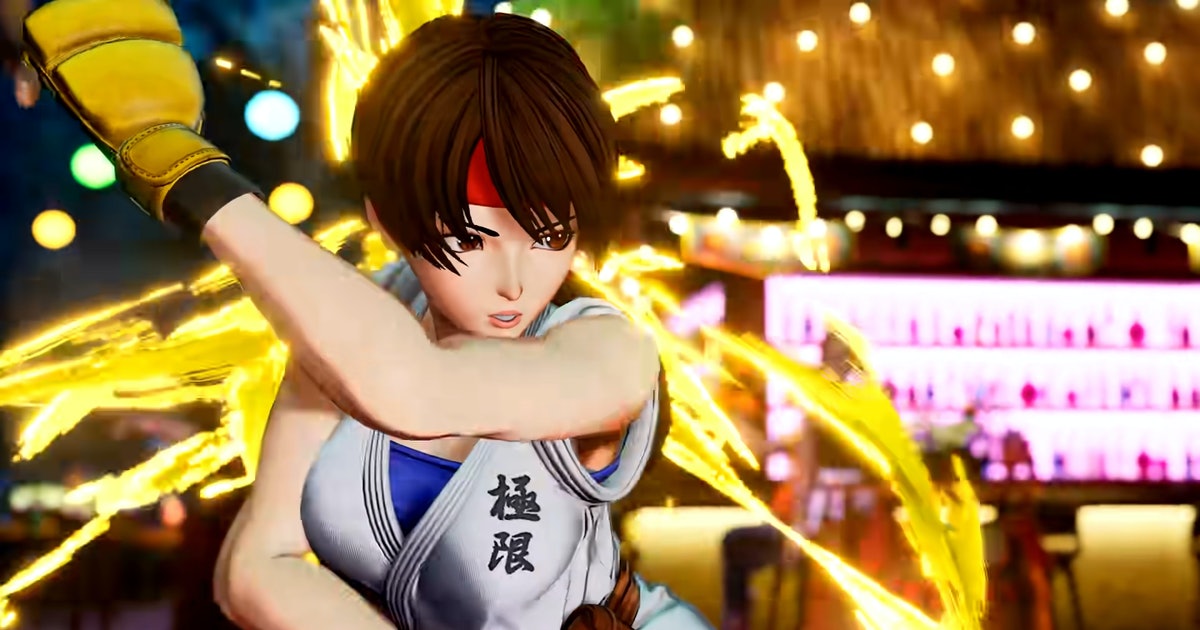 ‘King of Fighters XV’ review: All style, no substance

Even amid the fighting game resurgence happening right now, the little things make King of Fighters stand out.

Everyone in the charismatic King of Fighters XV cast spars verbally as they cement passionate rivalries and dish out fan service by the bucketload. Art of Fighting icons Robert and Ryo exchange unique insults with one another before coming to blows — it’s a bit like what Ken and Ryu do in Street Fighter, but with a lot more bite.

But KOF XV focuses too much on celebrating developer SNK’s history rather than delivering a compelling video game. Stages depicting Pao Pao Cafe and Sound Beach originate in the first Fatal Fury and contain tiny cameos from characters permanently sidelined (like boxer Michael Max, effectively missing since his 1991 debut). Even the soundtrack includes untouched themes from King of Fighters ‘94, but that nostalgia rings hollow without the gameplay depth to back it up.

All style without a ton of substance.

SNK has built a branded fighting game universe, for better or for worse. The boldness with which KOF XV descends into unintelligible anime nonsense is almost admirable. What was once about overthrowing corrupt organizers like Geese Howard has become an exercise in absurdist fantasy. Alternate dimensions rip open, and a sold-out crowd watching the finale still thinks they’re somehow safe being near this tournament location.

They are not — and neither are we.

When you compare KOF XV to its greatest rivals — mainly recent Street Fighter and Mortal Kombat games — the scripting falls flat. The “story” here is done in the traditional arcade mode of old, dressed up with three cinematics and the same sequences for every character no matter their place in the plot. Then, team-specific endings (made up of stills and text chatter) last longer than all preceding dialogue combined.

The execution is simple and antiquated, but it has some appeal. Mortal Kombat games have stages set in the middle of hurricanes or inside volcanoes. KOF XV hosts its tourney on calm streets, or within other game universes like Metal Slug where bearded POWs cheer you on in the background. It’s strange, but the purposeful limitations carry more personality than stages decked out with hyperactive animations (rest assured, KOF XV has a few of those, too). There’s room to appreciate an animated restaurant display or how the bartender at Pao Pao pays more attention to the fighting than to her customers.

But where is the substance?

KOF XV focuses so much on building SNK’s brand that it sacrifices a coherent narrative. This is readily apparent in the team structures: Chizuru, Iori, and Kyo are still a squad, but King has replaced Yuri alongside Ryo and Robert. This hardly matters to the casuals, but to KOF fanatics, it may feel like a misstep.

39 total characters pad out the roster (three of them new), and marketing materials tease an additional dozen via paid DLC. That’s standard fare for the genre, but when the game itself feels so empty at launch, wouldn’t more modes rather than fighters be a better idea? There’s nothing to do except the story/arcade and online battles, which offer rooms for casual and ranked play. Luckily, the few available online versus rounds during pre-release ran smoothly, even with notable distance between players. A mission menu poses combo challenges, although those come through more as an extension of standard training. Unlockable music tracks and video galleries offer minimal incentive to keep playing beyond seeing the often kitschy endings.

KOF XV’s changes happen in the one-on-one (or three-on-three) contests, where efforts go toward accessibility. While training offers little guidance for pulling off counter specials and other complex maneuvers, button-mashing light punch often generates a legitimate combo, ending in a potent finisher. There’s no need to overwork thumbs to find the right mixture of half-circles or stronger attacks. Purists will groan – loudly – at this, but it makes for pretty satisfying and accessible casual play. Rest assured that pros can still efficiently execute these moves, and the design is such that decades of genre experience are no longer necessary.

A new “Shatter Strike” system requires precise frame-counting input, a big advantage for veterans of the series. Shatter demands a special move be activated within an opponent’s own special animation. It’s a major change for the series that is gratifying to execute and even more fun to behold.

It’s doubtful SNK will ever revisit the jaw-dropping, pixel art beauty seen in KOF XII and XIII for cost/budget reasons, so this polygonal approach is the new norm. While not as stylistic as the moves made by Guilty Gear, the anime-infused aesthetic sticks around, now rendered at high-resolution and given a sharp HDR grading. Improvements from KOF XIV utilize the better hardware, injecting greater texture and mass to many of these characters like Ryo, whose muscles now bulge like an ‘80s era pro wrestler from the height of the steroid era. This isn’t a mere lift using the models from a now six-year-old game.

SNK also hasn’t changed its design aesthetics when it comes to in-game physiological physics. Mai still has impossible breasts, equally impossible stick-on clothing, and unmissable bounce in her movement. Is it braver to evolve and modernize appropriately, or remain stuck in the past?

Ignoring progress elsewhere almost makes sense in SNK’s world. KOF’s resistance to any grand story arc defies the pressure being applied by its rivals. Minimal solo options and routine online duels don’t reinvent anything either. This isn’t laziness on SNK’s part, however. It feels more like a focus on maintaining the design philosophy that the player base has loved all along: potent character design, instantly identifiable team play, and off-the-wall plotlines.

Tweaks like auto combos slowly push this once hardcore darling into a feasibly mainstream light, while Mai’s heaving bosom will forever ensure King of Fighters never loses the sentimental details that drew fans to this series to begin with.

King of Fighters XV will be released on February 17. Inverse played the PlayStation 5 version for this review.

Even amid the fighting game resurgence happening right now, the little things make King of Fighters stand out. Everyone in the charismatic King of Fighters XV cast spars verbally as they cement passionate rivalries and dish out fan service by the bucketload. Art of Fighting icons Robert and Ryo exchange unique insults with one another…

Even amid the fighting game resurgence happening right now, the little things make King of Fighters stand out. Everyone in the charismatic King of Fighters XV cast spars verbally as they cement passionate rivalries and dish out fan service by the bucketload. Art of Fighting icons Robert and Ryo exchange unique insults with one another…

How the most creative DIY couple on YouTube avoid burnout