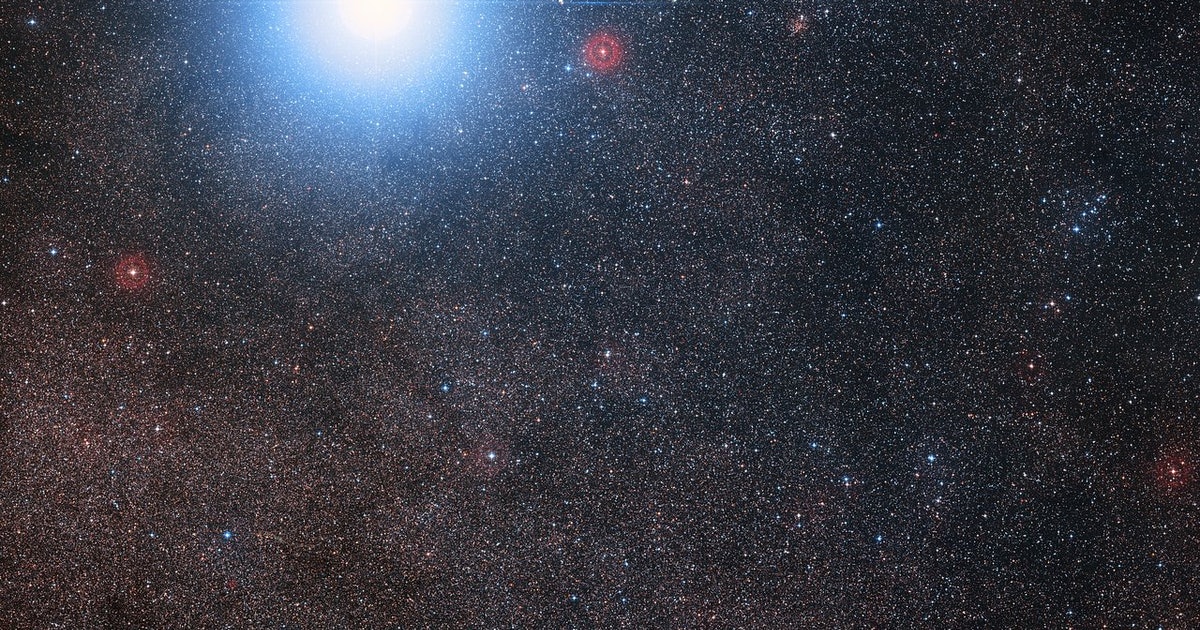 A new planet has been discovered in our galactic neighborhood.

A team of astronomers has found evidence of a third planet orbiting around the nearest star to our Solar System, Proxima Centauri. Due to its relative proximity (hence the name!) to Earth, this mysterious star system is an ideal target for a future mission to explore a world beyond the boundaries of our own stellar system.

The discovery is detailed in a study published Thursday in the journal Astronomy & Astrophysics.

They picked up a signal corresponding to an object passing around the star on a five-day orbit. But the signal was very weak, and the team had to conduct follow-up observations with the Echelle SPectrograph for Rocky Exoplanets and Stable Spectroscopic Observations (ESPRESSO) instrument to confirm that the signal was indeed a planet, and not caused by slight changes in the star itself.

The planet, dubbed Proxima d, is about a quarter of the mass of Earth. In fact, it’s not only the lightest planet discovered in this star system, but one of the lightest exoplanets ever discovered.

Why it matters — Proxima Centauri is the closest known star system to our own — if humans develop the technology to travel beyond the confines of the Solar System and reach interstellar destinations, then it is top of the list of first targets for such a mission. Now, we have more evidence there are diverse worlds waiting for these future endeavors to explore.

“The discovery shows that our closest stellar neighbor seems to be packed with interesting new worlds, within reach of further study and future exploration,” says João Faria in a statement. Faria is a researcher at the Instituto de Astrofísica e Ciências do Espaço, Portugal and lead author of the study. But there’s more.

Proxima d orbits its star from a distance of about four million kilometers, less than a tenth of Mercury’s distance from the Sun. It takes just five days to complete one full orbit around Proxima Centauri. Nevertheless, it orbits near to the star’s habitable zone, or the area around a star where it’s not too warm nor too cold for liquid water to exist at the surface of a planet. When it comes to theories of how and where life might arise elsewhere in the cosmos, liquid surface water is often the key.

Even more intriguingly, Proxima d is believed to be a rocky planet similar to Earth.

HERE’S THE BACKGROUND — Proxima Centauri is a low-mass red dwarf star, thought to be about an eighth of the mass of the Sun and 500 times less bright.

Proxima Centauri is located 4.2 light-years away from our Solar System. It is one of the suns of the Alpha Centauri star system, the closest known star system to our own. It consists of two stars interlocked in an orbit around each other, or binary stars, and one other star.

Although Proxima Centauri is the closest star to Earth, it is too small and too dim to see with the naked eye from our planet.

Armed with powerful telescopes, in 2016 scientists discovered a planet orbiting around the little star. That planet, Proxima Centauri b, orbits the star at a distance of roughly 4.7 million miles, with an orbital period of approximately 11.2 days.

This planet is about the same size as Earth, and orbits within its star’s habitable zone — an intriguing prospect for future exploration.

Meanwhile, another exoplanet, Proxima Centauri c is what is known as a super-Earth or mini-Neptune planet that’s about seven times as massive as Earth. It orbits around its star once every 5.2 years. Due to the star’s dimness and the planet’s long orbital period, it is unlikely that Proxima Centauri c is habitable.

WHAT’S NEXT — Each of the planets in the Proxima Centauri system provides an interesting case study for exoplanet scientists: They exist together around one star, but they are all very different from one another.

This oddity, as well as the tantalizing prospect of at least one planet firmly within a habitable zone, means scientists are always curious about whether or not a future mission could be prepared to visit the star system and its orbiting planets.

The scientists behind the recent discovery are also hoping to find more lightweight planets using the same instruments used to find Proxima d.

“This achievement is extremely important,” Pedro Figueira, an ESPRESSO instrument scientist, says in the statement.

“It shows that the radial velocity technique has the potential to unveil a population of light planets, like our own, that are expected to be the most abundant in our galaxy and that can potentially host life as we know it.”

Abstract: Context: Proxima Centauri is the closest star to the Sun. This small, low-mass, mid M dwarf is known to host an Earth-mass exoplanet with an orbital period of 11.2 days within the habitable zone, as well as a long-period planet candidate at an orbital period close to 5 years. Aims: We report on the analysis of a large set of observations taken with the ESPRESSO spectrograph at the VLT aimed at a thorough evaluation of the presence of a third low-mass planetary companion, which started emerging during a previous campaign. Methods: Radial velocities (RVs) were calculated using both a cross-correlation function (CCF) and a template matching approach. The RV analysis includes a component to model Proxima’s activity using a Gaussian process (GP). We use the CCF’s full width at half maximum to help constrain the GP, and study other simultaneous observables as activity indicators in order to assess the nature of any potential RV signals. Results: We detect a signal at 5.12 ± 0.04 days with a semi-amplitude of 39 ± 7 cm s−1 . The analysis of subsets of the ESPRESSO data, the activity indicators, and chromatic RVs suggest that this signal is not caused by stellar variability but instead by a planetary companion, with a minimum mass of 0.26 ± 0.05 M⊕ (about twice the mass of Mars) orbiting at 0.029 au from the star. The orbital eccentricity is well constrained and compatible with a circular orbit.

A new planet has been discovered in our galactic neighborhood. A team of astronomers has found evidence of a third planet orbiting around the nearest star to our Solar System, Proxima Centauri. Due to its relative proximity (hence the name!) to Earth, this mysterious star system is an ideal target for a future mission to…

A new planet has been discovered in our galactic neighborhood. A team of astronomers has found evidence of a third planet orbiting around the nearest star to our Solar System, Proxima Centauri. Due to its relative proximity (hence the name!) to Earth, this mysterious star system is an ideal target for a future mission to…

Glacier study finds Earth has less water than we thought