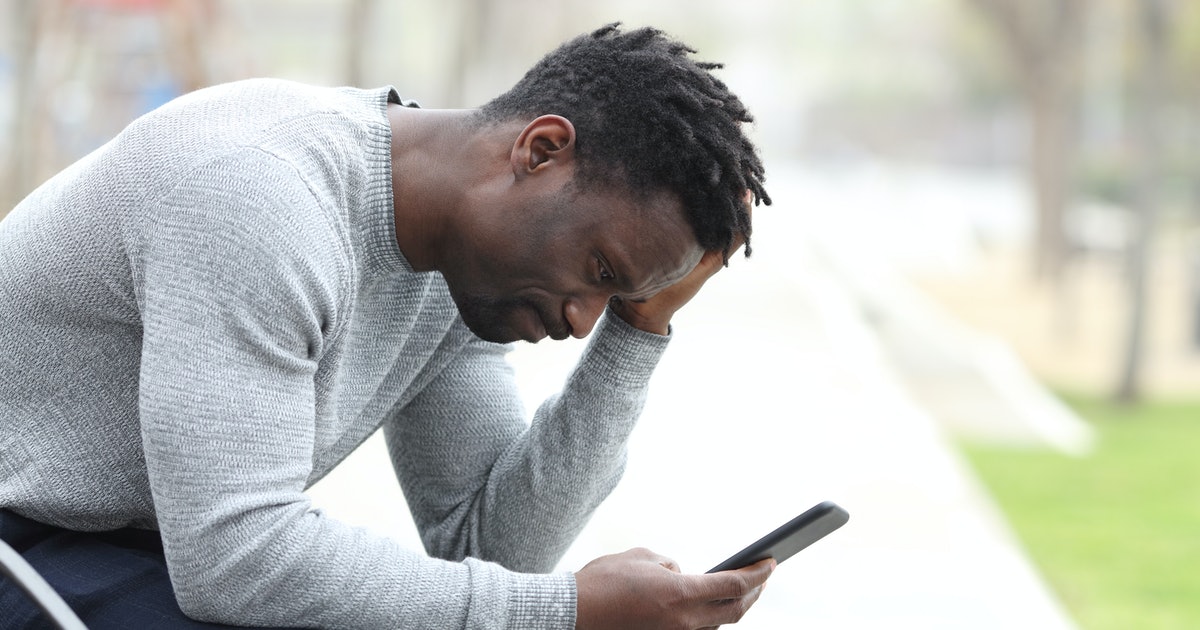 How does social media affect body image in men? The dangers of Instagram, explained

Chris* didn’t think he had an eating disorder.

It was just that “the more I scrolled through Instagram, the shittier I felt,” the 36-year-old tells Inverse.

Chris — who was teased as a kid for being too thin and later gained weight in college — found himself making constant, uncomfortable comparisons between his post-college body and those of his friends.

“I didn’t play a sport in college, but a lot of my friends were on the water polo team,” Chris says. Once college was over, a lot of the people he followed on the then-new photo-sharing service (now owned by Facebook) were college friends who also happened to be in excellent shape. Soon, he felt even worse about his post-freshman-15 body.

“The more I scrolled through Instagram, the shittier I felt.”

Chris is not alone. The messaging men receive on social media about the supposedly ideal body type is overwhelming, according to Thomas Gültzow, a researcher at Maastricht University in The Netherlands.

Gültzow was part of a team that analyzed which norms were conveyed by men’s social media posts. Their 2020 study, published in Cyberpsychology, Behavior, and Social Networking, found the majority of posts (62 percent) from large fitness Instagram accounts or accounts with fitness-related hashtags, promoted an appearance-related norm — typically a lean and muscular body type.

When the Facebook Papers were published last year, much of the media attention focused on the company’s knowledge of how using Instagram affects the body image and mental health of teenage girls.

“We make body image issues worse for one in three teen girls,” reads a slide from 2019.

“Teens blame Instagram for increases in the rate of anxiety and depression,” says another. “This reaction was unprompted and consistent across all groups.”

But while teenage girls are widely understood to be susceptible to negative messaging about body image, research shows that teenage boys and men are also vulnerable.

Because research into men, social media, and body image is much less robust than it is for women, it’s also less discussed. Negative self-perception of one’s body often manifests differently in men than women, which can also contribute to a dearth of public discussion on the subject.

Jason Lavender, a clinical psychologist by training and researcher with expertise in eating disorders in boys and men, tells Inverse that while research in this area is limited, what little there is suggests the same effects that social media can have on girls’ and women’s sense of self also apply to the body image and mental health of boys and men.

“It is easier to become obsessed with scrolling through social media.”

Lavender says boys and young adult men “may be particularly vulnerable, given that these age groups typically have the highest rates of regular engagement with social media, especially those for which images (video or photo) are the primary content.”

“The impact of social media upon people is significantly age-dependent, as younger people tend to be more impressionable, more likely to latch on to an ‘ideal’ that is being promoted (directly or by suggestion),” he says.

“But even in adults, there are risks” to social media, he adds. “ These risks are also present just going to a gym, but it is easier to become obsessed with scrolling through social media — multiple times per day, any time of day — than going to a gym.”

Whether in men or women, at the gym or on social media, the danger when it comes to body image, Lavender explains, is often “social comparison.”

“In this case,” he says of social media, “that would include comparing oneself to someone with a more idealized body type, which may be unobtainable for most boys and men — especially when also considering the frequency of photo editing and enhancement of social media images.”

Reiss says the data he’s seen is consistent with Lavender’s analysis. “People perceive the pictures and posts on social media as ‘ideals’ to reach for – ideals that are, for the most part, unrealistic and unachievable.”

“Most of the discussion is on the damage to self-esteem by trying to live up to an ‘impossible dream,’” he says. “This can happen consciously or unconsciously.”

Chris, whose initial forays into social media comparisons left him feeling terrible, eventually decided he could get closer to the ideal he kept seeing on his Instagram feed — even if he’d never looked like that before.

“I got really into CrossFit, which in and of itself isn’t bad,” Chris says of his post-college exercise regimen. “But a lot of guys at my gym were also doing really intense low carb diets with, like, one cheat day a week or month.”

“I would just go so hard on cheat days and feel so guilty that I really limited what I ate the other days and it just became a mess.”

That mess, Chris says, eventually included an unhealthy relationship with food and with his body.

Chris’s history of first being teased for being too skinny and then gaining weight may have predisposed him to some of the negative effects of social media.

“Social media can be kind of a Rorschach test in which you will find what you project,” Reiss says. “Whether that is due to anxiety, depression, relationship issues, or other specific emotional or mental health problems, it is very easy to fall into the rabbit hole of reinforcing dysfunctional beliefs, behaviors, and goals — as well as looking toward dysfunctional ideas and role models.”

“The extent to which ‘fitspo’ or related content has positive versus negative effects on a user likely depends on other factors,” he says “For example, if the user already has serious body image concerns, disordered eating behaviors, or is prone to those experiences, there would likely be a greater risk of that type of content having negative impacts.”

“Further, boys and men who internalize, or more strongly buy into, the importance of the ideal male body may be at greater risk for engaging in behaviors — including unhealthy ones — to pursue it.”

“I’ve even had to mute some people I’m friends with in real life.”

Chris’s descent from going to the gym to disordered eating quickly became a concern for his family, who intervened in 2009 and helped him find a therapist. They knew — and, with help, he eventually realized — that he needed to develop a better relationship with his own body, towards working out, and with food.

“I go to the gym three days a week now, no more,” he says of his life today. “And while I try to eat healthily, I don’t adhere to any specific diet — definitely no more ‘cheat days,’” which he realized exacerbated his disordered relationship with food by viewing healthy eating as a punishment, and pleasurable foods as a vice.

But staying healthy took more than that for Chris.

“I also limit how many fitness accounts I follow,” he says. “I’ve even had to mute some people I’m friends with in real life because what they were posting was just not good for me to see 24/7.”

He’s also maintained a relationship with his therapist to work through any issues as they come up.

Reiss is quick to note that social media isn’t always negative for everybody, and it can help people develop healthier habits and/or impact useful fitness advice.

“It’s clear that there are some posts, posters, influencers, etc. who provide basically good and solid information, without being grandiose or ‘promising the moon,’ he says.

But, as with everything on social media, Reiss adds, “it’s important to vet and fact-check any person/advice that you are going to follow. Some of the scams and simply ‘bad advice’ is easy to discern with any objectivity, but considering that even reasonable-sounding posters often have sponsors or subtle agendas that benefit them, vetting is not all that easy.”

Lavender notes that the metrics of social media can encourage even well-meaning people to engage in behaviors that exacerbate the problems of the platforms.

“The sharing of workout tips and other fitness-related advice does not inherently necessitate the inclusion of idealized male body images in posts,” Lavender explains.

“However, it is likely that accounts and posts depicting these images get more engagement,” he points out. ”This may motivate even well-meaning social media users who want to share fitness advice to include idealized image content — and since these accounts typically get more engagement, they are also the types of accounts that are often more readily found by those searching for this information.”

“Social media is largely fantasy and should be viewed as such.”

Underscoring this point, Gültzow and his colleagues found that posts depicting men adhering to a lean and muscular body type received significantly more likes and positive comments than other posts on similar health topics.

Because of these challenges, Reiss advises that people who wish to get more healthy try “integrating information from multiple different sources and then devising a personal program with personal goals — in coordination with an IRL reputable coach/trainer (even if just to set up the program) and, of course, input from your personal medical provider.”

Social media can be very good for getting tips from different reputable sources that you can integrate into a solid personal program, and using selected posters for motivation to follow your personal program isn’t inherently a bad thing.

The danger, Reiss explains, “is feeling that you must follow the program or maintain the specific goals that someone else, who does not know you personally, is explicitly or implicitly setting for you.”

When in doubt, Reiss advises, shut off your phone or computer and talk to friends and family as well as medical and mental health professionals.

“Simply put, social media is largely fantasy and should be viewed as such,” he says. “Real life happens IRL.”

Chris* didn’t think he had an eating disorder. It was just that “the more I scrolled through Instagram, the shittier I felt,” the 36-year-old tells Inverse. Chris — who was teased as a kid for being too thin and later gained weight in college — found himself making constant, uncomfortable comparisons between his post-college body…

Chris* didn’t think he had an eating disorder. It was just that “the more I scrolled through Instagram, the shittier I felt,” the 36-year-old tells Inverse. Chris — who was teased as a kid for being too thin and later gained weight in college — found himself making constant, uncomfortable comparisons between his post-college body…

Why you feel anxious after a night of drinking