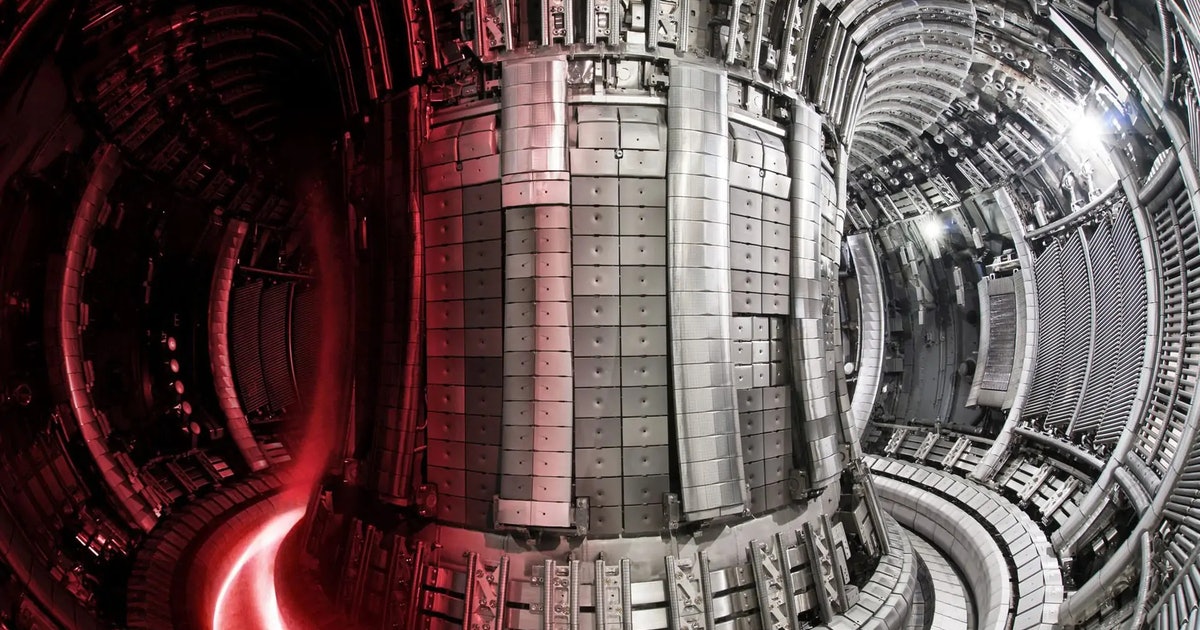 Scientists just made an incredible breakthrough

Fusion energy just took an exciting step toward one day helping to power everyday life. On Wednesday, the Joint European Torus (JET) facility, a giant physics lab located in the U.K., announced it had produced a record-breaking 59 megajoules of energy over five seconds. The feat beats the record set by JET previously in 1997 when it reached 22 megajoules. The breakthrough could aid the development of a promising new form of clean energy, one that mimics the Sun’s power.

“These landmark results have taken us a huge step closer to conquering one of the biggest scientific and engineering challenges of them all,” Ian Chapman, CEO of the U.K. Atomic Energy Authority that operates the facility, said in a statement.

The new record strengthens the case for the International Thermonuclear Experimental Reactor (ITER), a project supported by multiple countries, including China, the U.S., the U.K., and Japan. It will be the world’s most giant fusion energy machine of its kind.

Fusion energy involves smashing atoms together to release energy, which is distinct from fission, the process used in today’s nuclear power plants, which involves splitting atoms apart to form energy.

The new form of power generation has the potential to generate enough electricity to meet the world’s needs for tens of thousands of years, all with zero greenhouse gas emissions. And unlike fission, there’s no risk of a runaway reaction or a meltdown.

Watch an explainer on the new record below:

Want to find out more about the future of clean energy? Subscribe to MUSK READS+ for exclusive interviews and analysis about spaceflight, electric cars, and more

Fusion energy: What did JET achieve?

JET is the world’s largest and most powerful tokamak in operation, which is a donut-shaped device that holds plasma using a strong magnetic field. By containing the plasma, it enables nuclear fusion to occur. The facility is located in Culham, Oxford, and is operated by the U.K. Atomic Energy Authority (UKAEA) alongside EUROfusion, a consortium of 4,800 scientists and experts from over 30 European research centers.

The machine heats deuterium and tritium to 150 million degrees Celsius —around 10 times hotter than the Sun — transforming the elements from gas to plasma.

Magnetic coils shape the plasma as plasma exhaust removes the resultant helium from the chamber. As the atoms combine into heavier atoms, they release energy.

JET was able to produce 59 megajoules during the five-second experiment. The fusion power, or energy per second, averaged around 11 megawatts. That’s about one-fifth of a coal power plant. Unfortunately, the BBC notes that as the experiment used two 500-megawatt flywheels to heat the plasma, it used more energy than it produced. That’s not exactly efficient.

And again, it did beat the record previously set by JET in 1997, but it did not surpass the previous peak set in 1997 of 16 megawatts of power. The team has focused on sustaining energy production in recent years rather than producing more energy.

JET is not the only group exploring fusion energy. Around 30 miles from JET, First Light Fusion is also researching the technology. Last year, China’s EAST tokamak managed to heat plasma for 1,056 seconds or 17 minutes.

ITER, whose first experiment is scheduled for December 2025, could take these breakthroughs to new levels. The project is supported by seven members: China, the EU, the U.S., India, Japan, South Korea, and Russia. It aims to be the first project to produce more energy than went in, offering 500 megawatts of fusion power from 50 megawatts of heating power.

“For the ITER Project, the JET results are a strong confidence builder that we are on the right track as we move forward toward demonstrating full fusion power,” Bernard Bigot, director-general of ITER, said in a statement.

SUBSCRIBE TO MUSK READS+, A PREMIUM NEWSLETTER THAT COVERS THE WORLDS OF ELON MUSK, SPACEX, TESLA, AND EVERYTHING BETWEEN

Fusion energy just took an exciting step toward one day helping to power everyday life. On Wednesday, the Joint European Torus (JET) facility, a giant physics lab located in the U.K., announced it had produced a record-breaking 59 megajoules of energy over five seconds. The feat beats the record set by JET previously in 1997…

Fusion energy just took an exciting step toward one day helping to power everyday life. On Wednesday, the Joint European Torus (JET) facility, a giant physics lab located in the U.K., announced it had produced a record-breaking 59 megajoules of energy over five seconds. The feat beats the record set by JET previously in 1997…

66 years ago, the founder of Alcoholics Anonymous tried LSD — and ignited a controversy still raging today

SpaceX just lost 80 percent of its satellites — here’s why