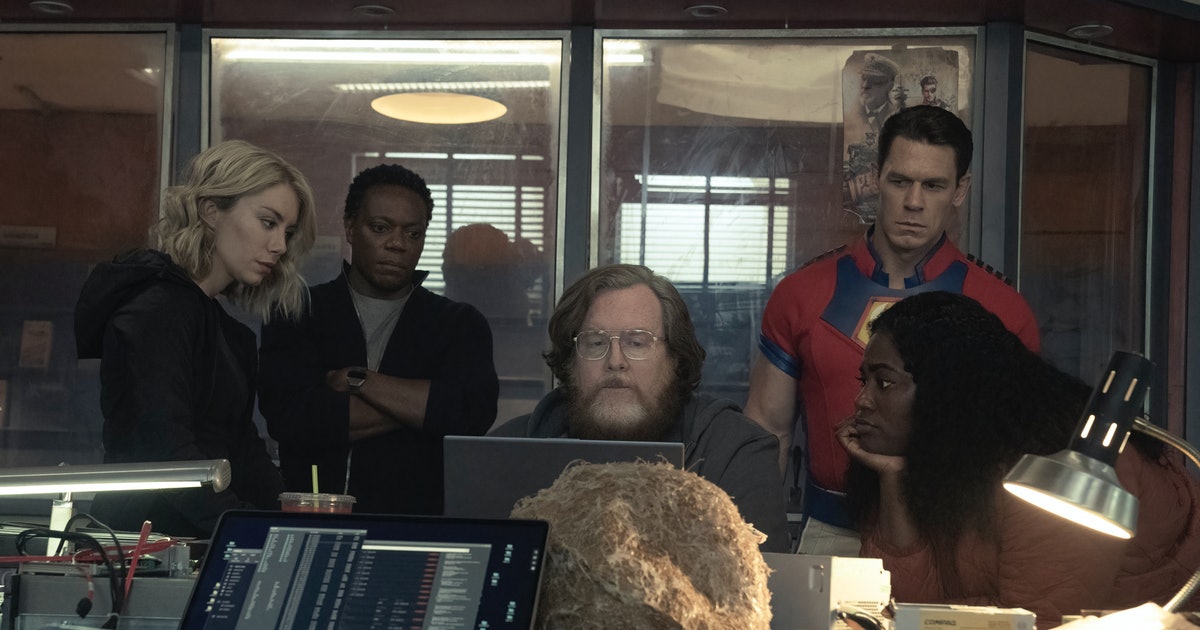 If anything, Peacemaker has proven itself to be one of the most original, engaging, and unpredictable entries in DCEU’s growing television slate. Not only has John Cena shown his acting range, but it also seems he can transition from unhinged super-patriot to traumatized sad sap with daddy issues in no time flat.

The cards have been stacked against Project: Butterfly since Episode 1, but as we head into the final two episodes of the season, the fortitude of these rag-tag heroes is sure to be tested like never before. After all, it looks like Earth is on the brink of a major conflict. And while the Butterflies’ numbers are massive, Peacemaker and crew have the gumption to go after them head-on. Chalk it up to bravado, gumption, and a sheer need to kick butt, we bet this battle everyone’s heading to is going to be one for the books.

Here is everything you need to know about Peacemaker Season 1 Episode 7, from its release date and time to its title and runtime.

When is the Peacemaker Episode 7 release date?

Peacemaker Episode 7 will premiere on Thursday, February 10. Unlike the show’s first week where it premiered its first three episodes, Peacemaker is now following its regular schedule of one new episode every Thursday.

Where can I watch Peacemaker Episode 7?

Peacemaker will debut new episodes exclusively on HBO Max. A subscription to HBO Max is required to watch the show.

When is the release time for Peacemaker Episode 7?

HBO Max typically premieres its new movies and TV shows at midnight Pacific, and this is the case with Peacemaker. Director James Gunn confirmed on Twitter that the show’s first episodes will premiere at 12:01 a.m. Pacific and 3:01 a.m. Eastern. It’s safe to assume this will apply to each new episode.

How many episodes are left in Peacemaker Season 1?

Peacemaker features eight episodes in its first season. Once Episode 7 premieres, there will only be one more episode remaining in the show’s first season.

What is the Peacemaker Episode 7 title?

Peacemaker Episode 7 is titled “Stop Dragon My Heart Around.” Here is the full list of episode titles for the first season, as we know them.

What is the runtime of Peacemaker Episode 7?

Peacemaker runtimes range between 38 minutes and 46 minutes in length. As far as we can tell, no episode in season one is longer than an hour. We have it on good authority that Episode 7’s runtime is approximately 38:59, including the end credits. Here are the approximate runtimes for seven of Season 1’s eight episodes:

What is the Peacemaker Episode 7 plot?

Things are heating up for the Project: Butterfly gang. Last week, Auggie was released from jail with the firm goal of murdering his son, Peacemaker. Learning the fingerprints found at the first Butterfly murder were actually Peacemaker’s, the cops surrounded our hero’s trailer to take him down. Vigilante and Peacemaker got away — with the help of Eagly and the newly appointed and thoroughly creepy, Captain Locke (Christopher Heyerdahl) — and the Goff Butterfly Peacemaker was keeping as a pet broke free and dove straight into Detective Sophie Song’s (Annie Chang) mouth.

Murn’s Butterfly secret is spreading, with Harcourt, Adebayo, and Economous now all in on the disturbing details. It turns out Project: Butterfly’s leader is a dissenter from the alien species’ mission of world domination. And that’s a good thing because a horde of Butterflies just arrived in tiny spaceships, leading to a chaotic parasitic massacre at the police station and jailhouse.

And remember that diary Adebayo planted in Peacemaker’s home? That planted evidence works against Peacemaker, pinning him for a whole slew of murders. The only problem is, he didn’t write it. If Amanda Waller is behind this, does that make her a Butterfly, too? The plot thickens like some, err, golden alien goo.

The terrifying turn-of-events showed off James Gunn’s genre skills (he wrote and directed this one) and set the stage for an all-out battle. But who will take down who? Auggie wants Peacemaker dead and the cops-turned-Butterflies want him stopped, as well. Can Project: Butterfly stop the production of all that amber slime and put an end to these invaders’ plans for world domination? Whichever way things go, the penultimate episode will surely be jam-packed with big twists and bonkers action.

Is there a Peacemaker Episode 7 trailer?

HBO Max released a new promo trailer, teasing Episode 7 of Peacemaker. Check it out below.

If anything, Peacemaker has proven itself to be one of the most original, engaging, and unpredictable entries in DCEU’s growing television slate. Not only has John Cena shown his acting range, but it also seems he can transition from unhinged super-patriot to traumatized sad sap with daddy issues in no time flat. The cards have…

If anything, Peacemaker has proven itself to be one of the most original, engaging, and unpredictable entries in DCEU’s growing television slate. Not only has John Cena shown his acting range, but it also seems he can transition from unhinged super-patriot to traumatized sad sap with daddy issues in no time flat. The cards have…