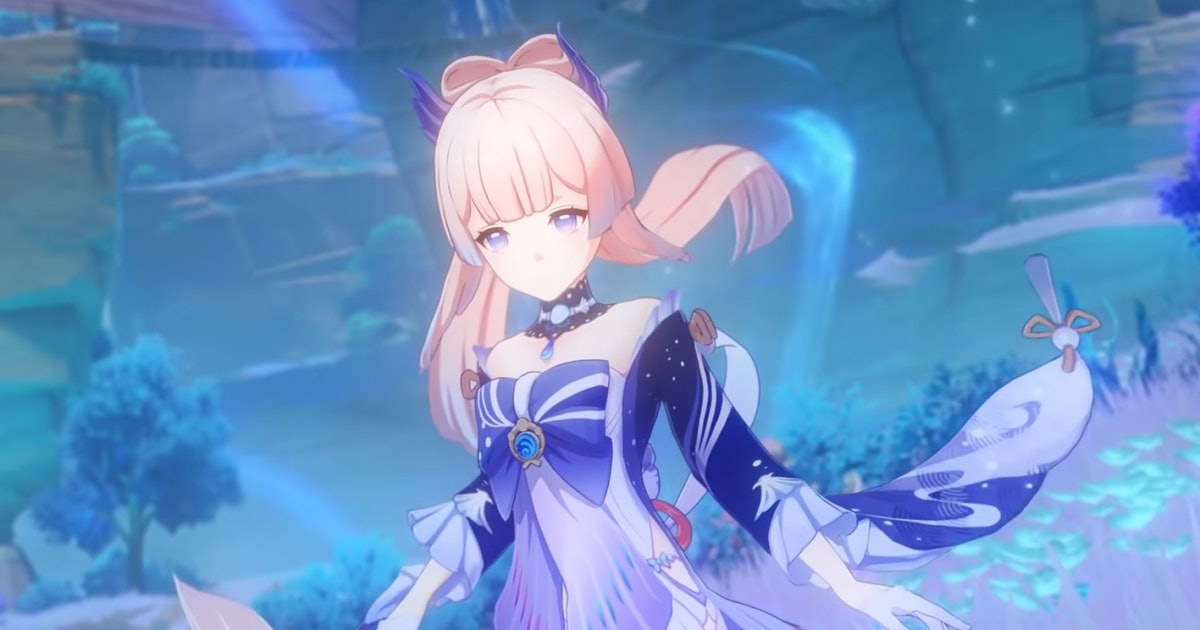 7 items to farm for the Divine Priestess

Sangonomiya Kokomi has skipped the queue of Genshin Impact banner reruns along with Raiden Shogun, but she’ll be back this February. By all rights, we should be looking forward to Klee, Venti, and Kazuha in the version 2.5 update. We should all be happy that Watatsumi Island’s priestess is back for another round since the Ocean-Hued Clam set that turns her into a mega healer and damage-dealer arrived after her banner had already ended. The time is nigh for Kokomi to become a top-tier pick, so here’s what to farm for her.

It’s worth noting that we’re also finally getting a fellow shrine maiden from another island, Yae Miko, which has been a long time coming. Since Kokomi and Raiden were first featured in the same batch of characters as Yae, this is already their second time around.

If Enkanomiya and Watatsumi’s resurgence have you pondering the Divine Priestess, you’re going to need some items to level her when she arrives. In this Genshin Impact Kokomi materials guide, I’ll walk you through what she needs, and how you can best farm it all in a speedy manner.

Where to find Kokomi’s ascension materials in Genshin Impact

Here I’ll explain where to find each of Kokomi’s ascension materials:

Varunada Lazurite and Dew of Repudiation

These Hydro character ascension stones come from Hydro bosses such as the Oceanid, but in this case, you want to fight the Hydro Hypostasis on Kokomi’s home island of Watatsumi, since it also drops the Dew of Repudiation items that you need. Bosses in Genshin respawn after a few minutes, so simply beat it, fast travel away, then come right back to rinse and repeat.

Another material found only on Watatsumi Island, Sango Pearls, are nestled inside clam shells all across the island. You can see every location on the Genshin Impact official map. Sadly, since Watatsumi is relatively small, you can only farm 44 of them at a time, and then you have to wait two days for them to respawn. As you need 168 altogether, this bit of the farming might take a little while. Unlike a lot of other materials, you can’t buy Sango Pearls anywhere either, so unfortunately there’s no real way to speed things up.

The Specter enemies were introduced in Genshin Impact 2.1 and are found on Seirai Island and Watatsumi Island, the two locations that were also released in that same version. Wandering around the islands will net you a fair few, but it’s also worth doing the Blossoms of Wealth on Watatsumi, as some of the enemies featured are Specters, and you can earn Mora at the same time.

These talent ascension scrolls are a reward from the Violet Court Domain on Mondays, Thursdays, and Sundays. To speed up your farm, make sure to grab some Crystal Cores from Crystal Flies to make Condensed Resin. You make this farming material at the Alchemy Bench, and it lets you claim two lots of rewards instead of one, halving the number of times you actually have to complete the Domain. To get the Condensed Resin diagram, you need to achieve level three reputation in Liyue.

This is one of La Signora’s boss materials. To unlock her fight, you have to complete the Inazuma Archon quest and get to her in the story, after which, you can face her as a weekly boss in the Trounce Domain. She’s quite tough, especially if you’re not a big fan of status effects and sheer cold from Dragonspine. If you want to go for the all-or-nothing approach, you can also break the heaters and coolers around the arena to immediately get rid of your status. As with any weekly boss material, you can craft Hellfire Butterflies from any of La Signora’s other drops with Dream Solvent.

Lastly, this rare ascension material for top-level talents is only available in a few locations. Three of them come from leveling the Sacred Sakura in Inazuma with Electro Sigils, and a further one from upgrading the Frostbearing Tree in Dragonspine with Crimson Agates. Events usually offer one per season as well, as with the recent Lantern Rite.

And that’s our Genshin Impact Kokomi materials guide. Good luck in getting her if you’re wishing!

Sangonomiya Kokomi has skipped the queue of Genshin Impact banner reruns along with Raiden Shogun, but she’ll be back this February. By all rights, we should be looking forward to Klee, Venti, and Kazuha in the version 2.5 update. We should all be happy that Watatsumi Island’s priestess is back for another round since the…

Sangonomiya Kokomi has skipped the queue of Genshin Impact banner reruns along with Raiden Shogun, but she’ll be back this February. By all rights, we should be looking forward to Klee, Venti, and Kazuha in the version 2.5 update. We should all be happy that Watatsumi Island’s priestess is back for another round since the…

From football hooligans to terrifying Pokémon

How old is Cad Bane in ‘Boba Fett’? The Star Wars history, explained