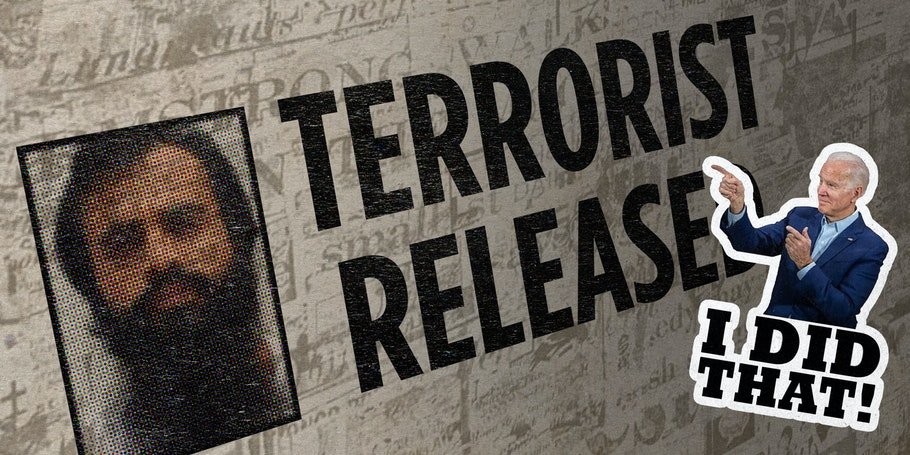 As with Barack Obama before him, this president seems more intent on releasing jihadists than protecting the homeland.

Where was Flight 93 headed? We know where it went down — in a field near Shanksville, Pennsylvania — but what was its intended destination, and might those indomitable American Patriots have been able to storm the cockpit and wreck the hijackers’ plans had there been a fifth jihadist cutthroat on board to contend with?

We don’t know the answers, nor do they matter. But what does matter is Joe Biden’s decision to release that guy, the would-be 20th hijacker, from the prison at Guantanamo Bay. In the words of Alabama’s Mike Rogers, the ranking Republican on the House Armed Services Committee, the decision is “an appalling capitulation to the far-left.” Rogers explained why: “Mohammed al-Qahtani was supposed to be one of the hijackers that day. He flew to America to participate in the attack and would have succeeded but for sharp-eyed INS agents. The leader of the 9/11 attacks, Mohamed Atta, was waiting in the airport parking lot to pick up al-Qahtani when he was denied entry to the United States.”

As The Washington Free Beacon reports: “Mohammed al-Qahtani … will be transferred to Saudi Arabia following the Biden administration’s decision late last week to set him free. He is scheduled to be flown to Saudi Arabia and placed in a ‘custodial rehabilitation and mental health care program for extremists,’ according to the New York Times.”

And there, of course, he’ll be held under the tightest security, never to take up arms against the United States again. Yeah, right. History tells us that released jihadists do, in fact, return to the battlefield against us, while others settle for cabinet posts within the Taliban. As investigative reporter Paul Sperry noted in August:

According to the December 2020 declassified report by the Office of National Intelligence, a total of 229 of the 729 detainees released from Gitmo have reengaged in terrorist activities, including conducting and planning attacks and recruiting and funding terrorists. That’s a recidivism rate of 31%. (The share would be even higher if US intelligence included engagement in anti-US statements or propaganda in its definition of “terrorist activities.”)

Some of the repeat offenders have since died or been recaptured, but 151 — or 66% — are still at large, the document reveals. And some have American blood on their hands. At least 12 released detainees have launched attacks on US forces in Afghanistan and killed about a half-dozen American soldiers and civilians. The exact figure remains classified.

So, when Barack Obama and Joe Biden and their ilk release jihadists, they repay us by killing Americans.

This must be all well and good for the anti-American lawyers of the so-called Gitmo Bar. Indeed, they’re no doubt popping champagne corks at the news of al-Qahtani’s release. After all, they’ve worked tirelessly on behalf of jihadist prisoners and against our national security interests ever since we began to use the warm, sunny confines of our naval base at Guantanamo Bay, Cuba, to detain the worst of them. According to information obtained via a FOIA request made by Debra Burlingame and Thomas Joscelyn some 12 years ago, these lawyers called their legal counterparts from the DOJ “desk torturers,” compared our military physicians to Nazi doctor Josef Mengele of Auschwitz infamy, suggested that the (admittedly awful) Abu Ghraib prison abuses in Iraq could implicate the American president in “war crimes,” made common cause with our sworn enemies and against our own military, made hand-drawn maps of detention camps and guard towers, posted photos of Guantanamo security badges on the Internet, and gave their clients a list of all the detainees. And they were doing all this “at the same time that U.S. forces in Iraq were sustaining devastating casualties from IED attacks.”

Upon al-Qahtani’s release from Gitmo, only 38 jihadists will remain there. One wonders how long it’ll take Joe Biden to release the rest of them.

Democrats tend to be soft on crime, and they tend to hate America. Thus, while the Biden administration’s release of this notable jihadist should infuriate us, it shouldn’t surprise us.

By DOUGLAS ANDREWS  February 8, 2022 in National Security As with Barack Obama before him, this president seems more intent on releasing jihadists than protecting the homeland. Where was Flight 93 headed? We know where it went down — in a field near Shanksville, Pennsylvania — but what was its intended destination, and might those…

By DOUGLAS ANDREWS  February 8, 2022 in National Security As with Barack Obama before him, this president seems more intent on releasing jihadists than protecting the homeland. Where was Flight 93 headed? We know where it went down — in a field near Shanksville, Pennsylvania — but what was its intended destination, and might those…

What Not to Watch This Weekend, or The Rest of the Duration…

Hump Day: Follow the Political Science Because “The Polling– errrr, The Science Has Changed”