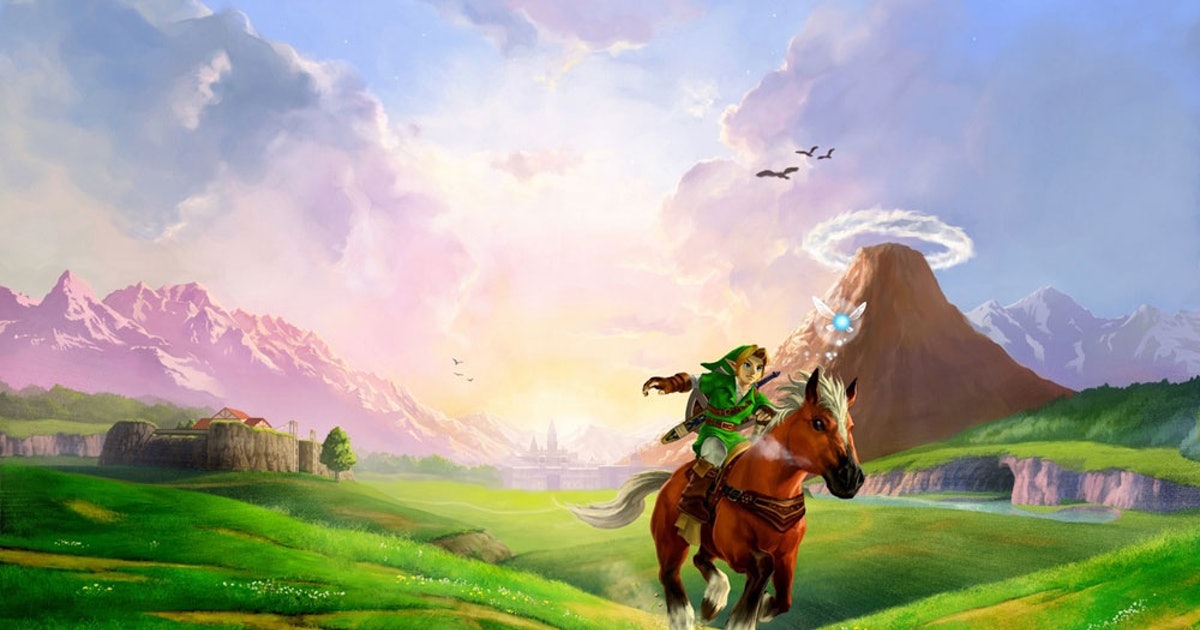 New technology always presents new questions for Nintendo. Up until the Nintendo 64, the company’s games had faced the technical limitations of the Super Nintendo systems. Some games for the SNES, even early games like 1990’s Pilotwings, were experimenting with three dimensions using a system known as Mode 7. It allowed developers to create an illusion of 3D with rotating and scaling backgrounds, and one Zelda game presents its most spectacular early use case. It’s a game you can play right now if you’ve got a Nintendo Switch Online subscription.

Mode 7 created some gorgeous visuals, but for developers there was one crucial drawback. These backgrounds couldn’t be interactive, at least not to the extent that a player can feel truly engaged with them. Pilotwings worked because it took place in the air. Anything not in the background is a sprite, which cannot rotate and scale. Games like Super Mario Kart have a fun visual effect, but there’s a clear disconnect between the sprites and the background.

The N64 eliminated the background-sprite divide, which meant games had to change how they functioned. The experience would become decidedly less linear, and For Shigeru Miyamoto, old strategies would have to be completely revised. This started with jumping. “When we moved to 3D for the first time in Super Mario 64 we became acutely aware of how difficult it is to jump on enemies moving in a 3D space,” he told The Guardian in 2020. They needed to develop moves other than jumping, like “running around or shooting water or spinning.”

Behold the trailer for the Nintendo 3DS port of the 3D remake.

This worked to great effect in Mario 64, but there was still the question of the background. There’s a lot of empty space in Mario 64, and Miyamoto would be filling that space in 1998 when he released The Legend of Zelda: Ocarina of Time. While the first 3D Zelda game may not stand up visually when compared to others in the series, it’s just as engaging as any of them.

Miyamoto remarked upon the differences in his two massive franchises to IGN in 1999. “In the case of Mario 64, Mario himself was the center of the attention, in the case of Zelda, it’s different,” he said. “The center of the game is not Link, but rather the world which he lives in is a base for making the total world, the total gaming world, and the camera work has been designed in a way to reflect that concept.”

This couldn’t be more apparent in Ocarina’s first level, the Kokiri Forest. Here, Link is an outsider. Being Hylian, as Link is, has made him an outsider among the Kokiri, known as “The Boy Without A Fairy,” a reference to the companions who follow the Kokiri around. But still, Link lives uneasily among them and must abide by their rules, including the fact that they cannot leave their area for fear of death.

Link is an outsider in Kokiri, which is made clear by his interactions with Mido. When Link suddenly gets a fair companion named Navi, he is called for by the forest’s spiritual father and guardian, the Great Deku Tree. Mido is incredulous, and can hardly believe Link would receive such an honor. Even after Link is able to find a sword and scrounge up the forty rupees needed for a shield, Mido tells him that he will never accept Link as a member of the Kokiri, ever.

Although those who have played Ocarina, and considering it has sold over seven million copies, there are many, will know that Mido won’t always feel this way, this is a less-than-auspicious start to Link’s adventure a far cry from his race to the castle in A Link To The Past. The forest showcases a natural world that has more to offer than coins hidden in shrubs. Those exist here as well, but understanding the world around Link is the core of Ocarina.

This is readily apparent in the game’s first dungeon, inside none other than the Great Deku Tree. Debuting inside the tree are the Deku Baba, carnivorous plants that look innocent from a distance but grow into vicious biters. The Deku Baba are minor enemies, the very first ones in the game, but they set the standard for how Link will interact in this world.

There’s far, far more to Ocarina than the Deku Tree. It’s a truly vast game, from Hyrule Castle to the Gerudo Valley to Zora’s Domain to the Gorons of Death Mountain and Goron City, which also makes its debut here. Some dungeons, like the controversial water level, might not be beloved as others, but all are memorable. Characters like Darunia, the Goron patriarch, come to life. Amidst the drama of Gannondorf and spiritual stones, Darunia could come off as unlikable. But when Link plays “Saria’s Song,” he can’t help but dance to the hot beat. It might be one of the most enjoyable moments in gaming history.

There are some drawbacks to Ocarina, especially on the Switch without an N64 controller. The N64 controller’s unique shape ports awkwardly onto the Switch, and the graphics can come off as flat and boxy compared to the intricacy of the older games and the majesty of the newer ones. But the game retains its many charms and will provide newcomers with hours and hours of rich gameplay buffeted by incredible level design and music.

New technology always presents new questions for Nintendo. Up until the Nintendo 64, the company’s games had faced the technical limitations of the Super Nintendo systems. Some games for the SNES, even early games like 1990’s Pilotwings, were experimenting with three dimensions using a system known as Mode 7. It allowed developers to create an…

New technology always presents new questions for Nintendo. Up until the Nintendo 64, the company’s games had faced the technical limitations of the Super Nintendo systems. Some games for the SNES, even early games like 1990’s Pilotwings, were experimenting with three dimensions using a system known as Mode 7. It allowed developers to create an…