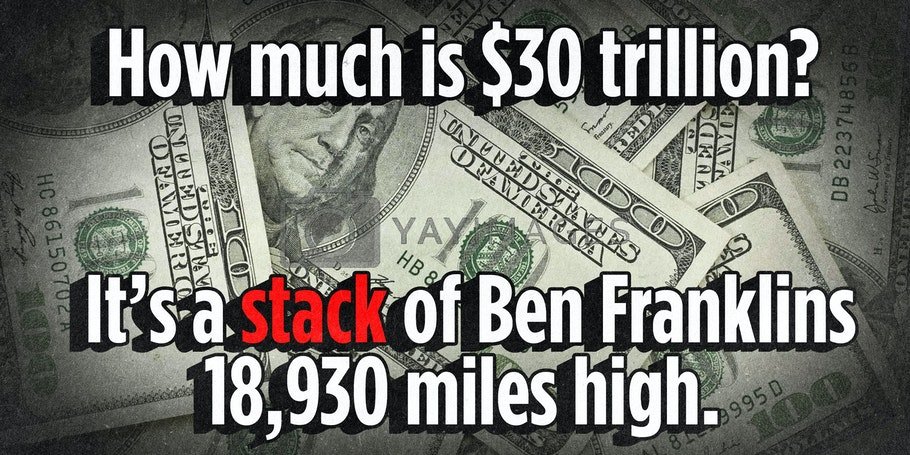 By DOUGLAS ANDREWS February 4, 2022 in Government

No one likes to talk about it, but that doesn’t excuse us.

Brudda, can ya spare 90 grand? We ask because that’s your share of the $30 trillion obscenity known as our national debt.

Now then, if you’ve made it to this paragraph, congratulations. We’re talking about the national debt, after all, which is doubtless the most essential issue that no one wants to talk about. Folks would rather eat dog food than read about our nation’s profligacy; they’d rather be tattooed by a jackhammer than be told what an awful bunch of spendthrifts we are. So we’ll keep this short.

“Contrary to the prevailing wisdom in Washington these past few years, we cannot simply spend as we please and defer the consequences to the next budget, the next administration, or the next generation.” That was then-President Barack Obama on February 23, 2009, and he was speaking at a — get this — “Fiscal Responsibility Summit” convened at the White House just days after having signed a massive economic-stimulus bill into law. In effect, he’d just bet his last hundie on a triple parlay before saying, I’ve got to stop throwing away money on these triple parlays.

At the time, our national debt was a paltry $10.8 trillion, which was nearly double what it was when his predecessor, George W. Bush, took office in 2001.

So, what the hell happened? When did we become a nation of drunken sailors on pay day? It’s hard to say, because we actually balanced a budget once — and it was within most of our lifetimes. Who remembers the presidency of Bill Clinton? Everyone gives Bubba credit for having balanced the budget, but he was mostly a bystander, mostly a Zelig. The real credit, as economist Stephen Moore has written, rests with then-House Speaker Newt Gingrich and the Republican Congress. As Moore writes, “Arguably, Gingrich’s finest hour as Speaker came in March 1995 when he rallied the entire Republican House caucus behind the idea of eliminating the deficit within seven years. Skeptics said it could not be done in seven years. The GOP did it in four.”

Don’t for a second, though, believe that Republicans are light years more fiscally virtuous than Democrats. Or that the GOP has finally seen the light of fiscal responsibility. As National Review’s Philip Klein notes:

Republicans are not much different. The old complaint is that Republicans talk a big game about cutting spending during Democratic administrations only to abandon fiscal restraint once they actually have power. While largely true, it’s significant that they have not reacted to President Biden’s binge in the way they did to the government expansions pursued by Obama and previous Democratic presidents. They ran on limited government and anti-spending platforms in their landslide wins in 1980, 1994, and 2010. There is no evidence that budget matters will be a central part of their message in this year’s midterms.

Those responsible for our skyrocketing debt point to the COVID-19 pandemic, and there’s certainly some truth to that. As the New York Post reports, “The national debt has expanded by approximately $7 trillion since January 2020, weeks before the pandemic began, as the Trump and Biden administrations dispersed stimulus payments and took other measures to support the economy.”

As the image above notes, $30,000,000,000,000 is a lot of money. It’s a stack of Benjamins that reaches well out into space. Another way to look at it is that if that stack were laid flat, it’d reach three-fourths of the way around the globe. Or, if our creditors insisted on being paid in small bills, a $30-trillion stack of $1 bills would almost get you to the moon and back … four times. This is sobering to folks who think a government’s finances should at least bear some modicum of resemblance to that of a family. Think about it: If you were that far behind on your payments, you’d have long ago found your furniture on the front lawn.

Indeed, our mind-numbing $30 trillion milestone is a “giant red flag for all of us about America’s future economic health, generational equity, and role in the world.” So says Michael A. Peterson, CEO of the Peter G. Peterson Foundation — an under-appreciated organization dedicated to fiscal responsibility. Peterson continues: “Our high and rising debt makes us less prepared for the next pandemic, less secure against future adversaries, less resilient to the changing climate, and less able to build the strong and inclusive economy that we all want for the next generation.” We could’ve done without the climate reference, but he no doubt threw that in there to get Alexandria Ocasio-Cortez’s attention.

The editorial board at The Wall Street Journal notes that the news about our fiscal millstone milestone received “a flutter of headlines but merely yawns from the political class. That might have something to do with the arsonist not wanting to hang out at the scene of his fire.” True enough.

The news isn’t all bad, though. As The Journal continues: “The debt really isn’t $30 trillion. About $6 trillion of that is debt the government owes to itself in Social Security and other IOUs. Social Security is a promise made by politicians to workers. It isn’t a contractual debt like a Treasury bill that must be repaid or risk default. Future politicians can refuse to pay workers what they owe, and eventually they will.”

So our public debt is a mere $24 trillion. But here’s the thing that should keep all of us awake at night. As The Journal’s editors point out: “The real issue is interest on all that debt, and what it means for the federal fisc. The debt costs very little when interest rates are near-zero. But when they rise, as they soon will, the burden of interest costs on the debt rises too. By one measure every percentage point increase in rates adds $100 billion a year or more to debt costs. That must be financed either with higher taxes or more debt.”

Where does this madness end? We have no idea. But as economist Herbert Stein once dourly noted, “If something cannot go on forever, it will stop.”

We lied. We said we’d keep this short.

By DOUGLAS ANDREWS February 4, 2022 in Government No one likes to talk about it, but that doesn’t excuse us. Brudda, can ya spare 90 grand? We ask because that’s your share of the $30 trillion obscenity known as our national debt. Now then, if you’ve made it to this paragraph, congratulations. We’re talking about the national…

By DOUGLAS ANDREWS February 4, 2022 in Government No one likes to talk about it, but that doesn’t excuse us. Brudda, can ya spare 90 grand? We ask because that’s your share of the $30 trillion obscenity known as our national debt. Now then, if you’ve made it to this paragraph, congratulations. We’re talking about the national…

What Not to Watch This Weekend, or The Rest of the Duration…