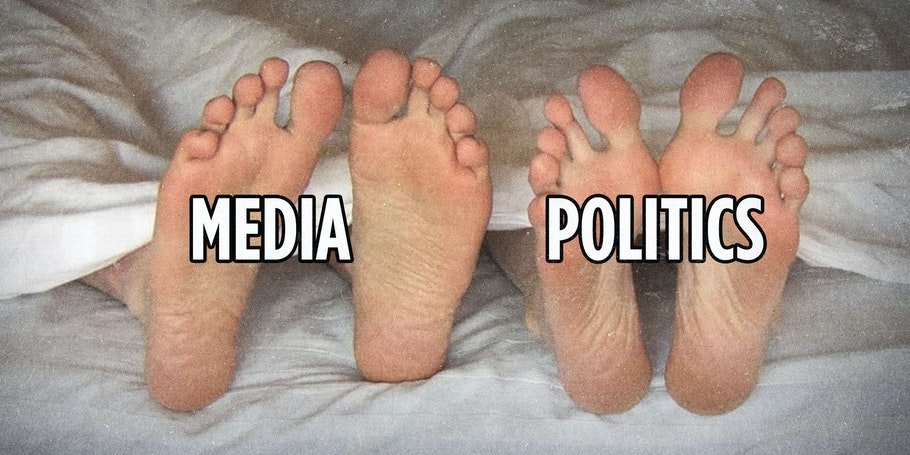 The Problematic Political Promiscuity of the Press

By NATE JACKSON February 3, 2022 in LeftMedia

CNN chief Jeff Zucker resigned over an affair with a colleague, but that’s just the tip of the iceberg.

Stop us if you’ve heard this one before: Someone at CNN had an inappropriate sexual relationship… This time it was CNN President Jeff Zucker, who resigned yesterday after it came to light that he, er, neglected to disclose a consensual romantic affair with Allison Gollust, executive vice president and chief marketing officer at CNN. Valentine’s Day came early this year.

As much as we love piling on CNN, this story isn’t really just about Zucker’s affair, or about his leaving, which he planned to do soon anyway. Yet there are a few important contextual details that actually provide evidence for the real story.

First, Gollust defiantly says she’ll remain at CNN. “Jeff and I have been close friends and professional partners for over 20 years,” she wrote, though “our relationship changed during Covid.” (Shouldn’t they have been social distancing?) While she “regrets” not disclosing it, she’s “incredibly proud” of the job she does, she’ll have you know, and she can’t wait to keep blessing CNN’s precipitously declining audience with the fruits of her labor.

But how long before she departs? Try to follow this one:

Part of the 20 years she mentioned was spent as communications director for former New York Governor Andrew Cuomo. Gollust left (a job with) Zucker at NBC for (a job with) Cuomo in 2012 before leaving Cuomo for Zucker just four months later — right about the time Zucker took over at CNN in 2013.

The only reason the affair came to light? Zucker explained that it was all Cuomo’s fault — Chris, that is: “As part of the investigation into Chris Cuomo’s tenure at CNN, I was asked about a consensual relationship with my closest colleague, someone I have worked with for more than 20 years. I acknowledged the relationship evolved in recent years. I was required to disclose it when it began but I didn’t. I was wrong.”

If you’ve forgotten about Cuomo’s firing, it was due to helping advise his brother Andrew. When the governor wasn’t killing elderly people with COVID in nursing homes, he was sexually harassing young women. His CNN anchor brother finally stopped having him as a guest on his show long enough to advise the governor on how to handle those allegations. Andrew eventually resigned and Chris was fired for his ethical sins, but meanwhile Zucker, Chris’s boss, was busted for an affair with a former aide to Andrew, probably thanks to a parting shot from Chris.

Is this CNN or a soap opera?

It turns out Chris Cuomo was right. As he told investigators in July: “There is no division between politics and media. We all know each other.” And sleep with each other, evidently.

Which brings us to the real point of this story — the incestuous relationship between politicians and the press.

Make no mistake, Republicans do it too. Former Republican strategist Karl Rove is a ubiquitous presence on Fox News, which also employs Dana Perino, former press secretary for George W. Bush. But Democrats are far more apt to do this because they have so many more opportunities at so many more networks and newspapers. It is the Leftmedia, after all.

People in the Beltway/New York orbit are constantly leaving media jobs to take positions with political administrations or vice versa. And when they aren’t being professionally promiscuous, they’re building friendships and starting romantic flings at all the same cocktail parties.

They also cover for each other as much as possible. Remember Matt Lauer, NBC’s #MeToo offender extraordinaire? Zucker was his boss too, and he looked the other way.

CNN may be among the worst offenders on the sex front lately, but it’s hardly alone in corrupting its news coverage with these personal relationships. We can’t trust the mainstream media to honestly cover political figures — especially Democrats — because they all work together, hang out together, and have sex with each other.

Oh, and one parting shot of our own: Perhaps no one is more responsible for making Donald Trump president than Jeff Zucker. As the Spectator’s Stephen Miller writes: “Zucker handpicked Donald Trump to helm The Apprentice, resurrecting the Donald’s cultural relevance. Their relationship acted as a springboard for Trump to conquer media and politics. President Donald Trump was not a phenomenon created by conservative politics. It wouldn’t have happened without Jeff Zucker’s NBC.” Or without CNN’s wall-to-wall coverage of Trump’s candidacy providing essentially free campaign commercials for him.

In return, no one was more responsible for great ratings at CNN than President Trump. On the flip side, once CNN helped get rid of Trump, its ratings crashed and haven’t recovered.

By NATE JACKSON February 3, 2022 in LeftMedia CNN chief Jeff Zucker resigned over an affair with a colleague, but that’s just the tip of the iceberg. Stop us if you’ve heard this one before: Someone at CNN had an inappropriate sexual relationship… This time it was CNN President Jeff Zucker, who resigned yesterday after…

By NATE JACKSON February 3, 2022 in LeftMedia CNN chief Jeff Zucker resigned over an affair with a colleague, but that’s just the tip of the iceberg. Stop us if you’ve heard this one before: Someone at CNN had an inappropriate sexual relationship… This time it was CNN President Jeff Zucker, who resigned yesterday after…

Georgetown Law Panders to the Mob