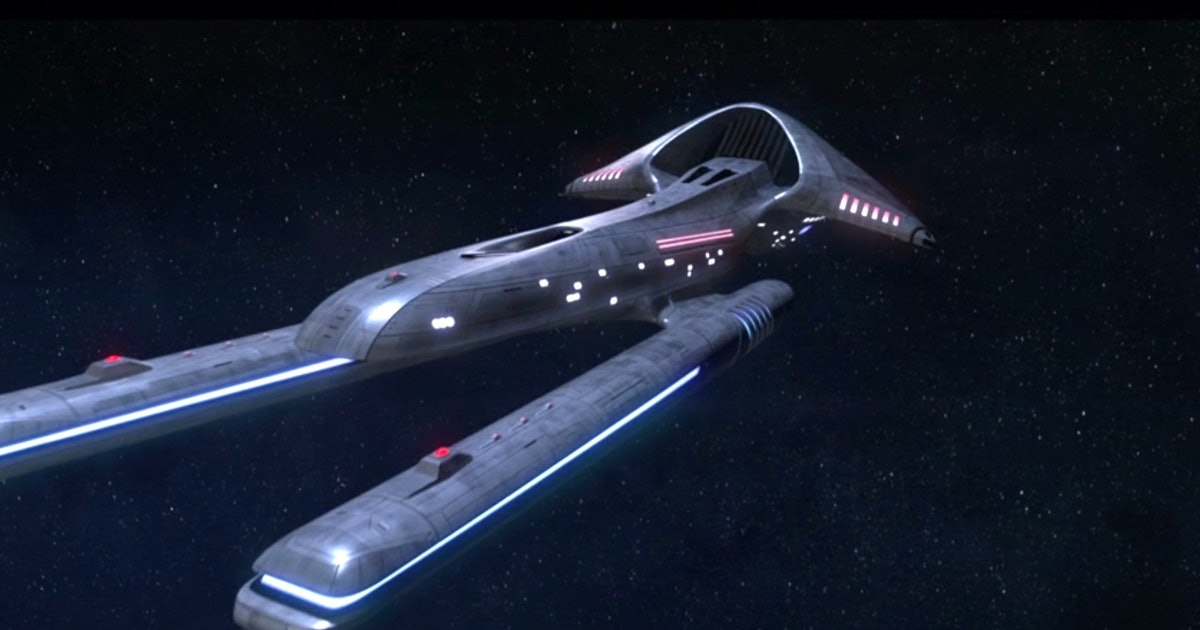 The Prodigy universe just got a whole lot bigger. In the mid-season finale, “A Moral Star, Part 2,” the wayward crew of the USS Protostar learned a lot about how, and why, everyone arrived at this exact point in time. Those revelations, combined with a last-second return of another famous Star Trek character, might have you wondering how this all fits in with the larger timeline. Here’s what we know, plus some timeline clarifications from Star Trek: Prodigy showrunners Dan and Kevin Hageman.

It turns out Gywn’s father, the villainous and single-minded Diviner of the alien species known as the Vau N’Akat, is a time traveler. Up until now, Prodigy has suggested that Gywn (Ella Purnell) and the Diviner (John Noble) are the last of their species, and that the planet Solum is unpopulated. However, in “A Moral Star Part 2,” we learn the Diviner actually traveled back in time over 50 years from the future to prevent Starfleet from making First Contact with Solum in the first place.

When you add 50 years to Prodigy’s spot in the timeline, 2383, that means their true point of origin is the year 2433. When reached for comment, the Hagemans confirmed that this figure “sounds about right,” and that the Diviner’s origin does extend well beyond the events of Picard Season 1, which takes place in 2399. The Hagemans also added that the audience hasn’t seen everything about how the Protostar got to Tars Lamora.

“Though the backstory revealed in episode 10 may not fill in all the holes — those holes won’t be left empty,” they promised. When pressed on whether future episodes will involve more time travel twists, the showrunners said “Our future selves have written us a note not to comment.”

In what almost feels like a post-credits scene, the final moments of “A Moral Star Part 2” reveal that Starfleet is indeed tracking the USS Protostar, and the person searching for the ship is none other than Admiral Janeway herself! Like Hologram Janeway, this character is voiced by Kate Mulgrew, but this Janeway is the original.

In the 2002 film Star Trek: Nemesis it was revealed that Janeway had been promoted to Admiral by the year 2379, and thus was actually giving Captain Picard orders. Prodigy only takes place a few years after that, in 2383. The Hagemans also confirmed that this Janeway is in the same time period as the crew of the Protostar, and that she’s not involved in any time travel shenanigans herself. Here’s what they said when asked directly about where and when Admiral Janeway is in this episode:

“Though there is a bit of time travel involved in getting the Protostar to Tars Lamora, Admiral Janeway is indeed in the Prodigy crew’s timeline — The Prime Universe, approximately 2383.”

The exact nature of how the Protostar got to Tars Lamora has yet to be revealed, but for now the timeline shakes out something like this:

While the events of Prodigy seemed self-contained, all the new timeline revelations have opened up the series to the rest of Trek canon. Admiral Janeway and the crew of the USS Dauntless are rocking Lower Decks-style Starfleet uniforms, which makes sense within the context of 2383 since Lower Decks is set in 2381.

But the more interesting detail is how the future point of origin might impact Picard Season 2 and Season 3. We know Picard Season 2 will deal with some time travel to 2024, but how far that series will play out into the 25th century isn’t clear. Picard Season 2 showrunner Terry Matalas has said, “To me, Star Trek: Picard is the present day of Star Trek,” and has implied stories in that time period, around the early 25th century, could continue even after Picard Season 3 ends.

So if Picard Season 3 does spend more time in the early 2400s, we now have at least one event that will occur in that future. At some point, Starfleet will roll up to the planet Solum in the 2430s, and when they do, it’s going to retroactively cause a lot of problems for Admiral Janeway in the 2380s.

The Prodigy universe just got a whole lot bigger. In the mid-season finale, “A Moral Star, Part 2,” the wayward crew of the USS Protostar learned a lot about how, and why, everyone arrived at this exact point in time. Those revelations, combined with a last-second return of another famous Star Trek character, might have…

The Prodigy universe just got a whole lot bigger. In the mid-season finale, “A Moral Star, Part 2,” the wayward crew of the USS Protostar learned a lot about how, and why, everyone arrived at this exact point in time. Those revelations, combined with a last-second return of another famous Star Trek character, might have…

How did Luke get Yoda’s lightsaber? The Star Wars mystery, explained