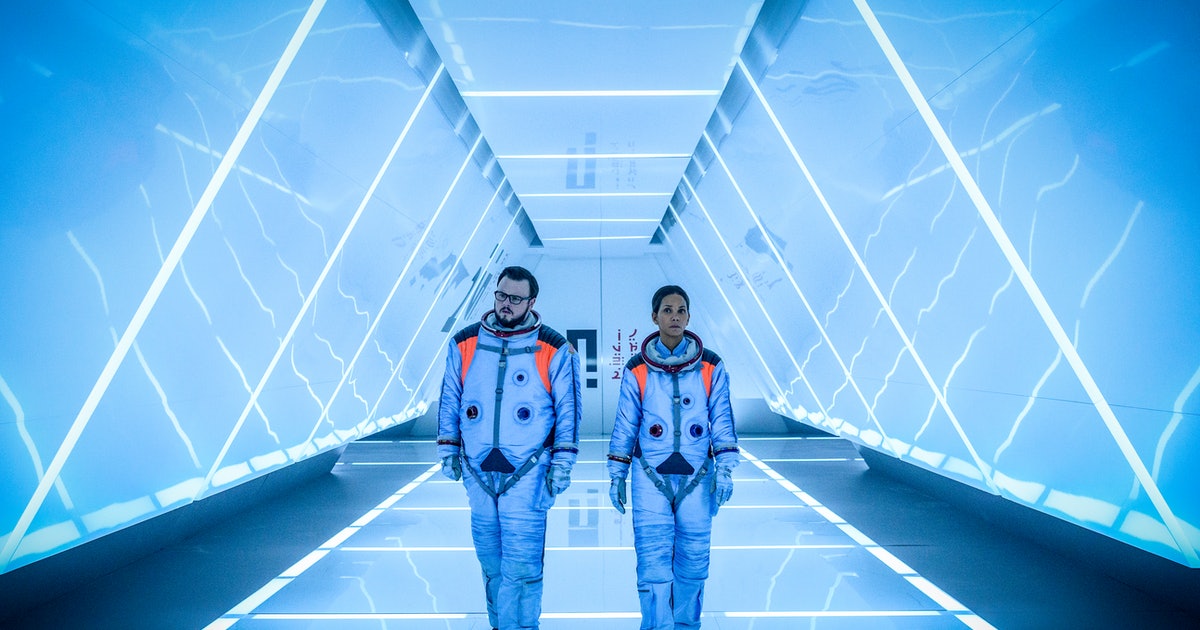 “Save the Moon, save Earth.” “Disgraced hero” and former astronaut Brian Harper (Patrick Wilson) utters these words, nicely summing up the simple but effective premise of Moonfall.

What if Hollywood still made big-budget blockbuster disaster movies on the scale of Independence Day, Godzilla, or take your pick of Roland Emmerich’s filmography? What if two astronauts — one of them the acting director of NASA and the other a divorced dad just trying to make things right with his kid — dragged a conspiracy theorist to the Moon in a rocket ship covered in profane graffiti? If you find these hypotheticals even the slightest bit overwhelming to consider, then you might not be ready for Emmerich’s latest film.

Moonfall takes itself seriously in all the earnest ways the director is known for. The dialogue is absolutely cheesy, and it’s easy to imagine Emmerich standing by his actors as their biggest cheerleader on Earth and beyond, championing every ham-fisted line. And yet, while Moonfall is not a comedy, it is one of the first hilarious movies to hit theaters in 2022.

Moonfall opens in 2011 when a space mission goes horribly wrong. During a routine satellite repair, a group of astronauts loses power to their ship, and Harper witnesses a machine-like entity swarming toward the Moon. The movie jumps 10 years, now finding Harper unemployed with a teenage son (Charlie Plummer) who hates him. Elsewhere, an anxiety-ridden outcast named K.C. (Game of Thrones‘ John Bradley) has made an incredible discovery with harrowing consequences. For some unknown reason, the Moon has fallen out of orbit and will eventually collide with Earth.

As humanity promptly scrambles to solve this problem, Harper and K.C. team up with Jocinda (Halle Berry), another astronaut from that 2011 fateful mission who still works at NASA. Together, they make a last-minute, go-for-broke plan to stop the Moon, even as the world has already begun to suffer from the shifts in gravity the Moon’s fall caused. Tsunamis engulf cities as a swarm of asteroids fill the screen with Emmerich’s signature disaster-movie bombast. But once they get to the Moon, there’s no telling what sinister, universe-shattering secrets they may find.

Moonfall is blissfully cathartic in its wanton destruction.

Moonfall is absurd. It’s pure nonsense with a dash of sci-fi gibberish added to justify anything witnessed onscreen. But even though it’s the end of the world, the characters are having a total blast, so it’s easy for the audience to have ridiculous fun, too. Humanity might be breaking apart at the seams, but we can still have a good time trying to sort it all out. So oddly enough, Moonfall is blissfully cathartic in its wanton destruction because we can’t control anything. In other words, Moonfall is Fast and Furious with spaceships instead of cars.

Emmerich’s most recent disaster movies, 2012 and Independence Day: Resurgence, admittedly contained much of the same atrocious filmmaking and rough special effects found in Moonfall. Perhaps they weren’t this successful because they were reactionary disaster movies, with Emmerich trying and failing to adapt to modern movie tastes.

The director, who co-wrote Moonfall with Harald Kloser and Spenser Cohen, doesn’t try nearly as hard here to make a movie that will transcend the genre with something “timely” as he did in The Day After Tomorrow. He doesn’t attempt to usher in a new wave of disaster flicks, similar to Ric Roman Waugh’s surprisingly satisfying Greenland. And unlike 2012, there’s a more pronounced and memorable sci-fi bent to the Moon and how it can wreck the Earth, allowing a huge variety of calamities to fill the 130-minute runtime.

The film’s only indefensible transgressions lie in the director’s usual indulgences. Sure, the side characters and their misadventures have an obvious function. They reinforce the stakes, break up the Moon mania, and add a much-needed perspective into what’s happening on the ground. The problem is that it’s profoundly challenging to switch gears from a space chase inside the Moon to a hunt for oxygen masks inside a fire station in Colorado.

Moonfall also fails to consider time and place when glorifying the pursuits of conspiracy theorists pretending to be doctors, with John Bradley being charming and affable as K.C. That message is complicated in a movie that isn’t smart enough to handle that kind of subtext with responsible nuance.

There is as much to love in Moonfall as there is to hate. It’s a conventional disaster flick that occasionally nosedives into unintentional brilliance with its chaotic energy reminding audiences these kinds of movies can still — shockingly — get made in 2022. That’s one giant leap for film, all right.

Moonfall opens in theaters on February 4.

“Save the Moon, save Earth.” “Disgraced hero” and former astronaut Brian Harper (Patrick Wilson) utters these words, nicely summing up the simple but effective premise of Moonfall. What if Hollywood still made big-budget blockbuster disaster movies on the scale of Independence Day, Godzilla, or take your pick of Roland Emmerich’s filmography? What if two astronauts…

“Save the Moon, save Earth.” “Disgraced hero” and former astronaut Brian Harper (Patrick Wilson) utters these words, nicely summing up the simple but effective premise of Moonfall. What if Hollywood still made big-budget blockbuster disaster movies on the scale of Independence Day, Godzilla, or take your pick of Roland Emmerich’s filmography? What if two astronauts…