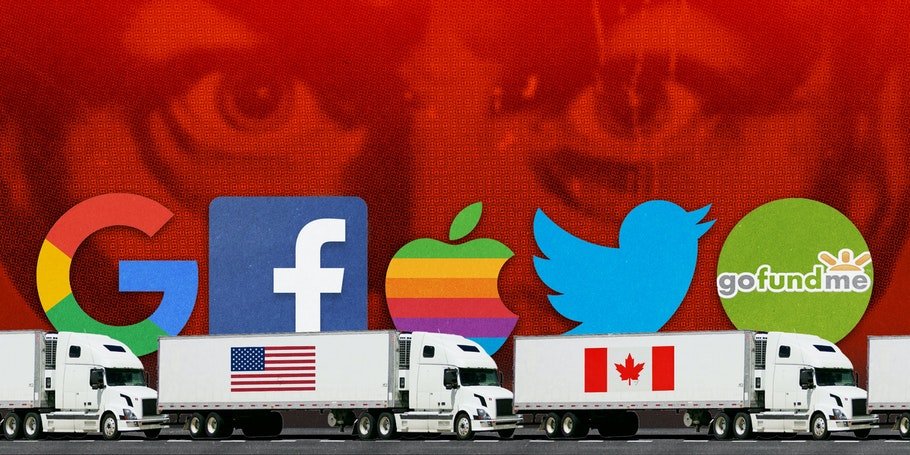 By  DOUGLAS ANDREWS February 3, 2022 in BigTech

Both the Canadian convoy and its American counterpart are feeling the wrath of the Big Tech censors.

When you think of Google, Facebook, Twitter, Apple, and the like, think: The Enemy. Because that’s what they are. If you love freedom, if you cherish your God-given liberties, then your best interests are at odds with Big Tech.

Yesterday, the increasingly activist GoFundMe platform froze the fundraising page of Freedom Convoy 2022, that magnificent movement of liberty-loving Canadian truckers who set out last week on a 2,000-mile trek from Vancouver to the capital of Ottawa to protest Prime Minister Justin Trudeau’s onerous and misguided vaccine mandate and other COVID restrictions.

The convoy became a national sensation, and its GoFundMe page has raised more than $10.1 million since its inception on January 14. As Fox News reports, “That amount far exceeded the amount raised by Canada’s major political parties last quarter.”

The truckers’ message, which appears on their GoFundMe page, is straightforward: “To our Fellow Canadians, the time for political overreach is over. Our current government is implementing rules and mandates that are destroying the foundation of our businesses, industries and livelihoods. Canadians have been integral to the fabric of humanity in many ways that have shaped the planet. We are a peaceful country that has helped protect nations across the globe from tyrannical governments who oppressed their people, and now it seems it is happening here.”

Predictably, Big Tech and Big Media moved to smash it, as a bureaucratic note on the aforementioned GoFundMe page makes clear: “This fundraiser is currently paused and under review to ensure it complies with our terms of service and applicable laws and regulations. Our team is working 24/7 and doing all we can to protect both organizers and donors. Thank you for your patience.”

Translation: You truckers are getting too uppity, so we’re shutting you down.

Unfortunately, there’s more where that came from. Here in the U.S., American truckers followed Canada’s lead by organizing their own anti-mandate protest called “Convoy to D.C. 2022.” In response, the despicable censors at Facebook took the extraordinary step of removing the group’s Facebook page. “Censorship at its finest,” is how the convoy’s organizer termed it.

Big Tech, of course, has us by the short hairs. Short of going off the grid, it’s all but impossible to live a life free of regular interaction with or dependence upon the many useful and addictive IT innovations of Silicon Valley. We may loathe these Masters of the Universe, but we continue to enrich them. It doesn’t have to be this way, though. In his 2021 book The Tyranny of Big Tech, Missouri Republican Senator Josh Hawley writes:

Victory against Big Tech’s pathologies requires that we reinvigorate family, neighborhood, school, and church, the places where, in authentic community, we come to know ourselves and one another, exercise our responsibilities, and find our sense of belonging. These are the places where we become citizens, where we become free, where we learn to exercise the sovereignty of a citizen in a free republic. Genuine community is now, more than ever, countercultural — and opposed to the ersatz “global community” pushed by the corrupt and power-hungry Big Tech.

Hawley also stresses the need for a new politics to push back against what he rightly calls “the triumph of corporate liberalism.” To do so, we must work to elect representatives who recognize Big Tech as the enemy, as a malign force worth fighting. And that fight begins by dismantling the framework that gave rise to Big Tech: the lax antitrust enforcement and outdated antitrust laws, the cozy and often incestuous relationship between the Beltway and Silicon Valley, and the special regulations and the carve-outs in the law that at one time helped nurture and sustain a fledgling IT industry but now, bizarrely, make Big Tech even stronger.

Here in our humble shop, we’re also at the mercy of Big Tech — at least to some extent. You might well have found this article on our Facebook page, which currently has more than 714,000 followers and is a powerful platform on which to push our message. And yet, as our Mark Alexander has written, our success makes us subject to their Orwellian practices of redlining and shadow-banning.

We know how these truckers feel, and we encourage them. And if we choose not to fight back against government tyranny and its Big Tech censors, may our chains sit lightly upon us.

By  DOUGLAS ANDREWS February 3, 2022 in BigTech Both the Canadian convoy and its American counterpart are feeling the wrath of the Big Tech censors. When you think of Google, Facebook, Twitter, Apple, and the like, think: The Enemy. Because that’s what they are. If you love freedom, if you cherish your God-given liberties, then your best…

By  DOUGLAS ANDREWS February 3, 2022 in BigTech Both the Canadian convoy and its American counterpart are feeling the wrath of the Big Tech censors. When you think of Google, Facebook, Twitter, Apple, and the like, think: The Enemy. Because that’s what they are. If you love freedom, if you cherish your God-given liberties, then your best…

The case against surveillance advertising

Peter Thiel, an early Facebook investor, is stepping down from Meta board