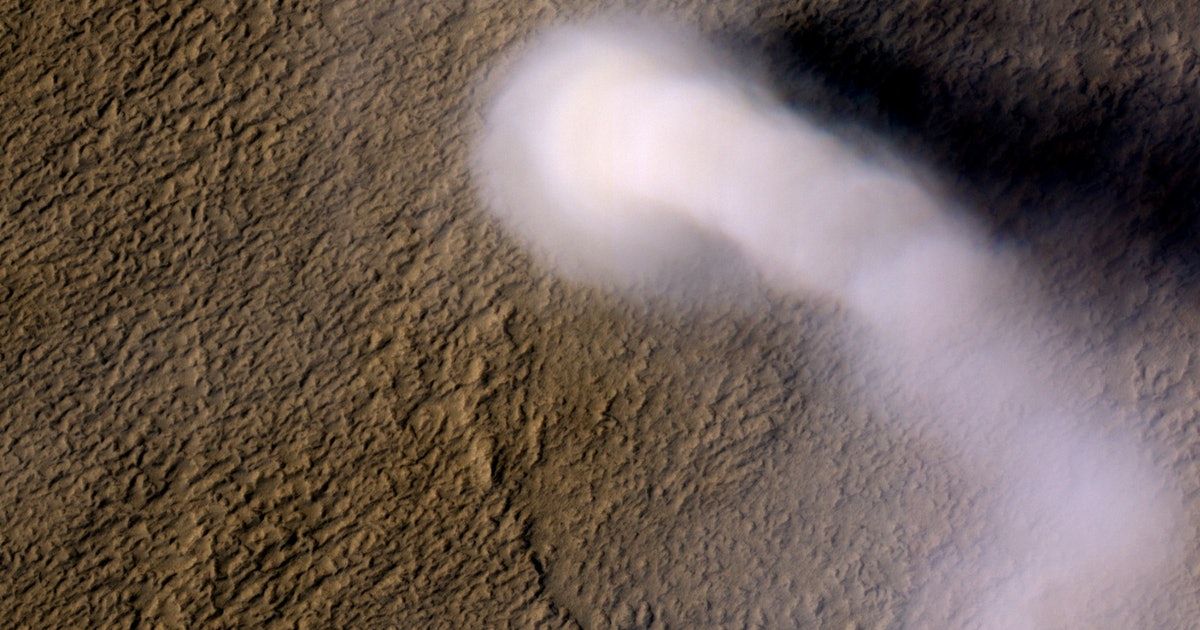 Mars meteorite upends when we think life could have began

In 2011, a piece of Mars crash-landed in the Western Sahara Desert. The Martian meteorite encapsulated the history of the Red Planet within its different layers, revealing the sequence of events that took place during Mars’ past.

A new analysis of the meteorite revealed that Mars may have suffered from large impacts much later than scientists believed, possibly affecting its ability to host life for at least an additional 30 million years.

The findings are detailed in a study published Wednesday in the journal Science.

It is believed to be the second oldest meteorite discovered, about two billion years old, and contains the most water found in any of Mars’ fallen rocks.

Previous studies of Black Beauty have shown that the meteorite lacked signatures of shock deformation, which led scientists to believe that Mars stopped experiencing heavy bombardment from flying space rocks about 4.48 billion years ago. This also suggested that the planet could have developed habitable conditions early on in its history.

The team behind the new study probed NWA 7034, analyzing a total of 66 zircon grains. Zircon is a rare mineral found on Mars that scientists refer to as a time capsule since it preserves information about its environment from the day it was created.

In one 4.45 billion-year-old zircon sample, the researchers found a set of shock twins or a microstructure that forms in rocks during large impacts that exert pressures of at least 20 to 30 gigapascal (a unit used to measure pressure), according to the study.

This type of shock microstructure has been found in crystalline rocks on Earth and the Moon, but never before identified in Mars samples. On Earth, scientists link this type of shock twins found in zircon to impact events during the planet’s early history that resulted in global climate changes strong enough to have triggered a mass extinction, according to the study.

The shock microstructures indicate that Mars still experienced heavy bombardment much later than scientists had previously calculated by about an additional 30 million years. The heavy bombardment was strong enough to vaporize water on Mars and disrupt its atmosphere, reducing the planet’s chances of being habitable.

HERE’S THE BACKGROUND — Although Mars is a cold desert today, the Red Planet may have once been a warm, wet world with the potential to host some form of life.

Mounting evidence from Martian missions has shown that the planet had rivers and lakes on its surface, organic molecules, and suitable conditions for life during its early history. But later, the planet lost its water as it suffered atmospheric escape, turning it into the arid world it is today.

But ongoing missions like Curiosity and Perseverance are searching for signs of habitable environments that may have existed on Mars during its more habitable past and picking up clues to help scientists put together pieces of the puzzle of Mars’ history.

WHAT’S NEXT — The researchers behind the new study suggest that arguments for a habitable Mars during its early history must be reconciled with this recent finding since an extinction-level impact would have altered Mars’ conditions.

They argue for two scenarios that need to be examined:

With the Martian meteorites that have landed on Earth, scientists are still limited by the amount of data they can pull from them.

But NASA’s Perseverance rover landed on Mars in February 2021, armed with a set of tools that will enable scientists to bring back a sample of Mars to Earth.

This sample will hold answers as to whether or not life ever existed on our neighboring planet.

Abstract — After formation of a primordial crust, early impacts influenced when habitable conditions may have occurred on Mars. Martian meteorite Northwest Africa (NWA) 7034 is a regolith breccia that contains remnants of the earliest Martian crust. The paucity of shock deformation in NWA 7034 was previously cited as recording a decline in giant impacts by 4.48 billion years and evidence for habitable Mars by 4.2 billion years ago. We present new evidence of high-pressure shock effects in a 4.45–billion year–old zircon from the matrix of NWA 7034. The zircon contains {112} shock twins formed in the central uplift of a complex impact structure after 4.45 billion years and records impact pressures of 20 to 30 gigapascals. The zircon represents the highest shock level reported in NWA 7034 and paired rocks and provides direct physical evidence of large impacts, some potentially life-affecting, that persisted on Mars after 4.48 billion years.

In 2011, a piece of Mars crash-landed in the Western Sahara Desert. The Martian meteorite encapsulated the history of the Red Planet within its different layers, revealing the sequence of events that took place during Mars’ past. A new analysis of the meteorite revealed that Mars may have suffered from large impacts much later than…

In 2011, a piece of Mars crash-landed in the Western Sahara Desert. The Martian meteorite encapsulated the history of the Red Planet within its different layers, revealing the sequence of events that took place during Mars’ past. A new analysis of the meteorite revealed that Mars may have suffered from large impacts much later than…