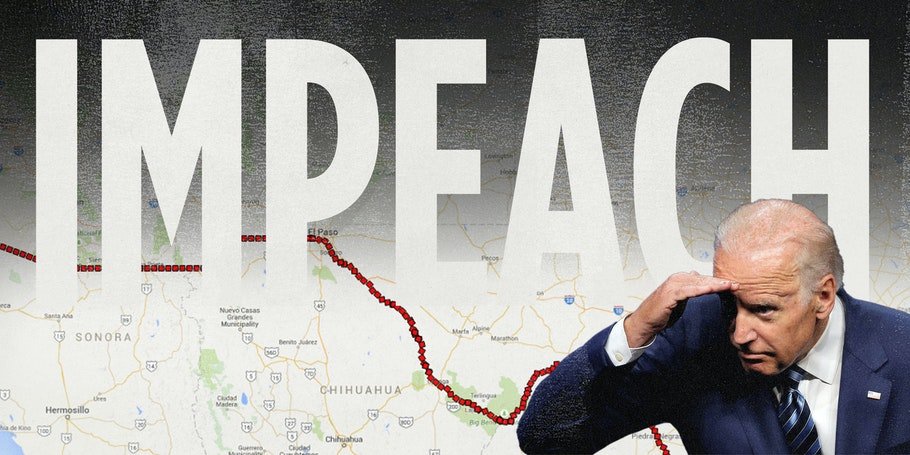 Impeaching Biden Is the Right Thing to Do

By DOUGLAS ANDREWS February 2, 2022 in Rule of Law

If the president’s nonstop southern-border malfeasance isn’t a high crime, nothing is.

Anyone who thinks the American people are sick and tired of presidential impeachment hearings should think again. Joe Biden may get his yet.

While it’s true that the Democrats made a mockery of this once-solemn process during Donald Trump’s first term in office — impeaching him once for a phone call that came perilously close to outing the Biden Crime Family, then impeaching him a second time for telling his supporters to “peacefully and patriotically make your voices heard” — a Rasmussen survey on Monday found that a full 50% of likely voters would still like to see our current president impeached. That’s compared to 45% who apparently don’t think Biden’s abject failure to enforce our immigration laws and his disastrous retreat and surrender in Afghanistan are anything to get worked up about.

Last week, our Emmy Griffin pondered the possibility of impeaching Biden’s point man, Department of Homeland Security Secretary Alejandro Mayorkas, given that a DHS secretary would be an easier lift than a president. She wrote:

Perhaps it is Mayorkas who should be impeached for not upholding his oath to protect the border and American laws in this respect. Mayorkas has stopped the building of the border wall, which has left gaps in the physical deterrent to border crossers. He has released migrants into the U.S., most of whom are single adult males. There have been several cases of these migrants breaking U.S. laws, the latest of which resulted in the death of a Houston law enforcement officer. He has failed to properly use the “Remain in Mexico” policy. His approach to border security has allowed fentanyl to flood the country, resulting in the deaths of tens of thousands. His refusal to do his job has cost American lives.

“However,” she concluded, “he is doing this poor job at the behest of the president, so the buck should stop with the lawless Joe Biden.” We agree.

So, it seems, does Power Line’s John Hinderaker — or at least he’s leaning that way. He writes: “Would it be smart for a Republican-controlled House to impeach Biden in 2023? I don’t know, but it is tempting. In legal terms, Biden’s grotesque violation of the Take Care Clause of the Constitution by his illegal opening of the Southern border would, without more, furnish solid ground for impeachment. And Biden has been incompetent or worse on a number of other fronts that would justify his impeachment far more than President Trump’s innocent phone call with the President of Ukraine.”

Biden, of course, has some serious impeachment insurance — in the form of a policy called “Kamala Harris.” Go ahead, he’s saying, make my day.

It’s a fascinating thought: If, as expected, Republicans take the House in November, and if they impeach this president, will enough Democrat senators join Republicans to convict Joe Biden, thereby removing him from office and elevating VP Harris to the presidency? Will Harris even be in office a year from now, given the well-documented troubles she’s had to date, and given that she’s the least popular vice president in history? Either way, removing Biden would end his dismal tenure as the party’s standard-bearer and give Democrats a chance to rebuild their brand before the 2024 presidential election. The alternative — short of medically removing him from office under the 25th Amendment — would be two more years of a cognitively failing president, and a colossal drag on the Democrat Party, and a likely loss of the presidency in 2024. A strong case could be made, then, that the best strategic outcome for Republicans would be to impeach Biden but fail to cobble together the 67 senators needed for conviction and removal.

Claudia Tenney, for one, isn’t buying it. The freshman congresswoman from New York’s 22nd District is all in on impeachment and conviction. “I’m reiterating my call for President Biden to be impeached and removed,” she posted recently. “His complete failure to enforce our immigration laws is a dereliction of duty that disqualifies him from holding this important office.”

Finally, as to whether impeachment serves as little more than a means of retribution, here’s Power Line’s Steven Hayward: “I believe classic game theory prescribes that tit-for-tat is the best strategy for making your opponent change their behavior. So by all means the GOP should impeach Biden (the grounds are far better anyway), and should also exact a high cost for Biden’s Supreme Court nominee. After all, Joe Biden is the person most responsible for poisoning the judicial confirmation process, starting with Bork in 1987. Time for payback. Stopping Garland in 2016 was good, but the Kavanaugh matter still needs to be redressed.”

It’s settled, then: Impeachment it is. But we do it because it’s absolutely the right thing to do, not because we’re seeking revenge, nor because we have every right to do so.

By DOUGLAS ANDREWS February 2, 2022 in Rule of Law If the president’s nonstop southern-border malfeasance isn’t a high crime, nothing is. Anyone who thinks the American people are sick and tired of presidential impeachment hearings should think again. Joe Biden may get his yet. While it’s true that the Democrats made a mockery of…

By DOUGLAS ANDREWS February 2, 2022 in Rule of Law If the president’s nonstop southern-border malfeasance isn’t a high crime, nothing is. Anyone who thinks the American people are sick and tired of presidential impeachment hearings should think again. Joe Biden may get his yet. While it’s true that the Democrats made a mockery of…

The Government’s Kill Switch for Your Car, Your Freedoms and Your Life