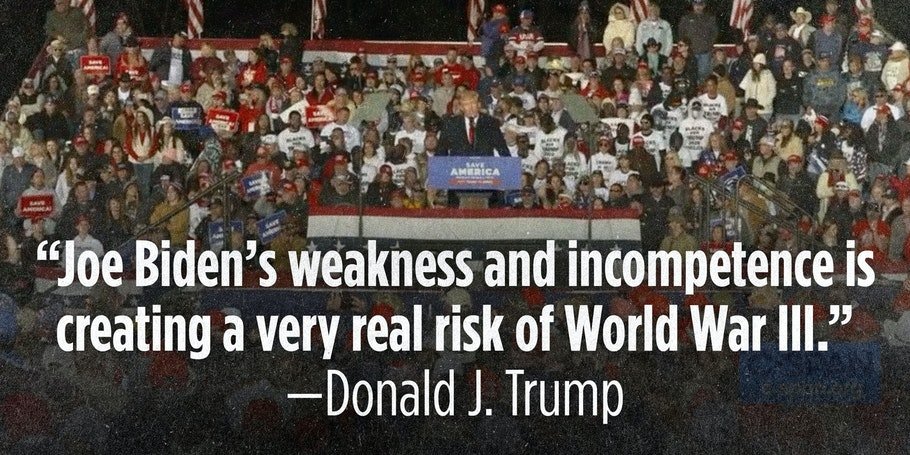 By DOUGLAS ANDREWS February 1, 2022 in Politics

In his second “Save America” rally of 2022, the former president focused on fighting fraud and winning November’s midterms.

“Hello, Texas,” said the former president. “It’s great to be back in this wonderful, beautiful state with thousands of proud American patriots who believe in family, and freedom, God and country, and, by the way, oil and guns.”

So it began for Donald Trump on Saturday night in Conroe, Texas, 40 minutes north of Houston. The event itself, his second “Save America” rally of 2022, didn’t get much press in the mainstream media, and that was by design. The Republican standard-bearer still draws crowds unlike any politician in American history, but the media doesn’t want to talk about it.

Trump, though, was more than happy to talk about it: “I was just informed by a wonderful local politician that this is the biggest crowd of its kind in the history of Texas,” he crowed. “And the fake news will say a smattering of people showed up.”

The Leftmedia hates Trump, and they fear him. After all, no American has done more to damage their reputation than Trump. More than anything, they wish he’d go away — even if it means their viewership numbers go with him. But to watch Trump on Saturday night, one gets the sense he has some unfinished business.

“Trump may be out of office and not yet an official candidate for president in 2024,” writes The Washington Post’s Tyler Pager, “but he still represents a conundrum for his party. The former president retains an unchallenged grip over the base of the party. In most states, separation from Trump’s desires and policies is a sure path to defeat in a Republican primary and risks lower GOP turnout in a general election.”

So far, so good for Pager, but he then goes on to decry Trump’s downplaying of the events of January 6, as if he alone were sick and tired of this story; sick and tired of the Democrats and the Leftmedia doing everything in their power to continually pump life into it, and to shamelessly drag it all the way toward November’s midterms.

Nor does Pager see eye-to-eye with Trump on what the former president calls the “radical, vicious, racist prosecutors” who seem intent on charging him with something, anything, to keep him occupied, nor with Trump’s desire to see “the biggest protest we have ever had in Washington, DC, in New York, in Atlanta, and elsewhere” if the prosecutors “do anything wrong or illegal.” But this rant took just a couple of sentences from Trump’s 80-minute speech. The vast majority of the former president’s time was spent on the fertile ground of the failures of the Biden administration and on the need to focus and energize Republicans for the coming midterm elections.

“Joe Biden’s weakness and incompetence is creating a very real risk of World War III,” said Trump. “If you care about your future, your family, and your country, then you have no choice: This November, you have to throw these raving lunatics the hell out of power and elect strong, smart, tough Republicans who will restore your borders, protect your safety, defend your jobs, and put America first. With Biden and the radical Left … it’s always ‘America last.’ … Everyone in Washington is obsessing over how to protect Ukraine’s border, but the most important border in the world right now for us is not Ukraine’s border; it’s America’s border, and we do nothing about it. … The first duty of the American president is to defend the American border. Before our leaders talk about invasions of other countries, they need to stop the invasion of this country.”

From a litany of Biden’s disastrous policies, Trump shifted to the 2020 election that he’s always maintained was rigged. But rather than falling back on lazy platitudes, Trump instead spoke specifically about how the Democrats did it, and what the Republicans need to do to keep it from happening again:

As we speak, the radical Democrats are aggressively pushing to permanently expand their mass mail-in ballot fraud nationwide. And you wonder: Why do they want to do that when they cheated so successfully in the election? They don’t have a voting rights bill; they have a voting fraud bill. … Every Senate Democrat supports abolishing voter ID in every state, forcing ballot harvesting on every state, forcing unsecured drop boxes on every state, and letting left wing billionaires pump dark money into local election offices. … $417 million … If you’re involved in politics, and if you give 10 cents more than $5,600, they put you in jail. [Mark Zuckerburg] gave $417 million, and they’re doling it out all over the country. It’s a disgrace. The only possible reason for Democrats to support such a bill is that they want to enable cheating and fraud on a massive scale. … When Republicans take over, we need to pass voter ID, signature verification, residency confirmation, no more unmanned and unsecured drop boxes … and no more ballot harvesting. … We should pass legislation cracking down hard on any city or state that attempts to allow illegal aliens to vote. Only American citizens should vote in American elections. And if it were solely up to me, I’d have one-day elections using only paper ballots except for military and seriously ill or disabled people. One day. We have these elections, they go on for weeks and weeks. The boxes are sitting in corners, they’re moving all over the place. Nobody knows what the hell is going on. … It’s a disgrace. We’re like a third-world country. We’re just nine months away from what could be the most important midterm victory in all of American history … our country is at stake, and we need a landslide so enormous that the radical Democrats cannot steal it no matter what they do. … So to every patriot here today, I ask you to get ready to work, to get ready to fight, and to get ready to win and win like never before. This is the year we’re going to take back the House. We’re going to take back the Senate. We’re going to take back America. And in 2024, we are going to take back that beautiful, beautiful house that happens to be white, that is so magnificent, and that we all love. We are going to take back the White House.

With a Republican Congress, we will fight for more jobs for American families, fair trade for American workers, and more American factories forging more American products. … We will shut down Joe Biden’s border disaster. We will again end catch and release. We will quickly complete the border wall. It will be done in three weeks. We will end chain migration, and we will make sure those admitted to our country share our values and love our people. We will hold China accountable for unleashing the virus and charge them trillions of dollars for the damage and suffering they have caused. We will end the foreign influence buying of our corrupt political class, and we will make clear that the government of the United States is not for sale. We will break up Big Tech, and we will restore the right to free speech in America. … Our corrupt media is going to destroy our country if we don’t do something about it.

“My fellow Americans,” Trump said, “this incredible journey we are on together has only just begun, and it is time to start talking about greatness for our country again.” He continued:

We will protect innocent life, we will defend our Constitution, we will defend the Second Amendment, and we will proudly uphold the Judeo-Christian values and principles of our nation’s founding. … We will ban critical race theory in our classes. We will ban it in our military. We will ban it from our workplaces. And we will ban it from our federal, state, and local governments. … If I run, and if we win, we will treat those people from January 6 fairly. … and if it requires pardons, we will give them pardons, because they are being treated so unfairly. … What that un-select committee is doing, and what the people who are doing that are running those prisons, it’s a disgrace. … We will fire the woke generals who only know how to lose. … We will restore pride in our armed forces, and we will keep the United States out of these ridiculous foreign wars, where they don’t even want us. We will ban men from participating in women’s sports. … We will restore patriotic education to our schools, and we will teach our children to love their country, honor our history, and to always respect our great American flag. … No matter how big or how powerful these corrupt radicals may be, you must never forget: Our nation does not belong to them. Our nation belongs to you. This is your home. This is your heritage. And our American liberty is your God-given right. 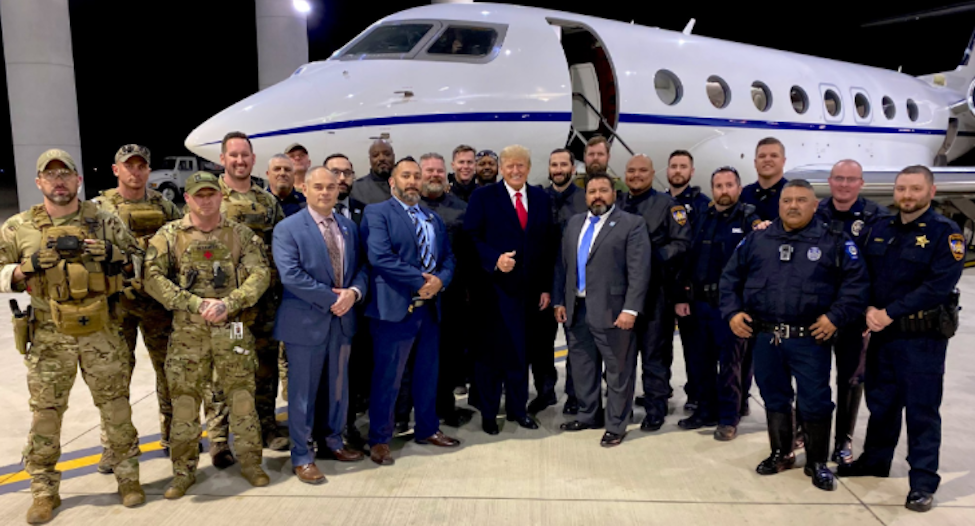 By DOUGLAS ANDREWS February 1, 2022 in Politics In his second “Save America” rally of 2022, the former president focused on fighting fraud and winning November’s midterms. “Hello, Texas,” said the former president. “It’s great to be back in this wonderful, beautiful state with thousands of proud American patriots who believe in family, and freedom,…

By DOUGLAS ANDREWS February 1, 2022 in Politics In his second “Save America” rally of 2022, the former president focused on fighting fraud and winning November’s midterms. “Hello, Texas,” said the former president. “It’s great to be back in this wonderful, beautiful state with thousands of proud American patriots who believe in family, and freedom,…

Fantasizing about another Trump impeachment