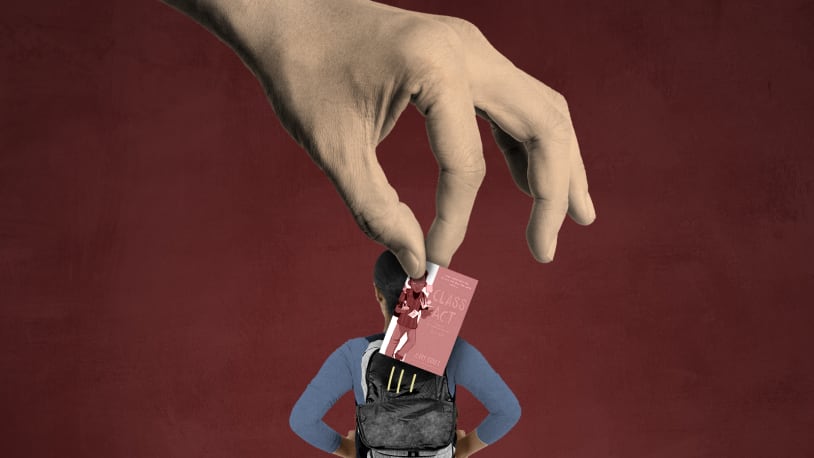 Book banning is back, and it’s targeting Black folks

Book banning has returned to American schools. It’s targeting authors who deal with race, sexuality, and gender, and it’s moving with a fervency that should alarm not only anyone concerned about he plight of authors but ultimately anyone worried about how American history is taught, because this is an effort to erase some of us from sharing our stories. Hiding away these books will quiet diverse voices, diminish our education system, and sanitize American history for the comfort of white folks.

One of the latest victims of this trend, Toni Morrison, once argued about the dangers of book banning in response to past attempts to restrict access to Huckleberry Finn, by Mark Twain, over its use of racial slurs. “The brilliance of Huckleberry Finn is [in] the argument it raises,” Morrison explained. Banning books, she continues, is a “purist and yet elementary kind of censorship designed to appease adults rather than educate children.”

Sadly, Morrison was not extended the same degree of thoughtfulness she applied to Twain by the Wentzville School Board, located in western St. Charles County, Missouri, last week. The board voted 4-3 to pull Morrison’s celebrated The Bluest Eye from the district’s high school libraries.

The Bluest Eye tells the story of a young Black girl, growing up during the Great Depression, who longs for blue eyes because she feels unattractive and oppressed due to her complexion. Morrison, who died in 2019 at the age of 88, said she wrote the book to highlight the psychological toll of racism. Yet, somehow, this is offensive material to the school board.

Naturally, those behind the banning of the book prefer none of us categorize it as a ban: “By all means, go buy the book for your child,” Wentzville School Board member Sandy Garber told the St. Louis Post-Dispatch at the board meeting. “I would not want this book in the school for anyone else to see.” The condescension and latent prejudice is to be expected, but it is no less distasteful.

The Wentzville board also voted to ban Heavy, by Kiese Laymon, All Boys Aren’t Blue, by George M. Johnson, and Fun Home, by Alison Bechdel. And this is but the latest in a series of such votes in school districts across the country.

There’s a pattern in the books they choose: These are texts about Blacks folks and other marginalized groups. A representative list of the targeted works can be found on the site of No Left Turn in Education, an organization that has identified around 75 books it claims “are used to spread radical and racist ideologies to students.” The books are grouped in three categories (“critical race theory,” “anti-police,” and “comprehensive sexuality education”) and, curiously, are covered with Black faces, queer people, and women who dare to believe they deserve autonomy over their own bodies. These books “demean our nation and its heroes, revise our history, and divide us as a people for the purpose of indoctrinating kids to a dangerous ideology,” No Left Turn says.

For all the awkward phrasing and nonsensical claims, this is not a movement to be dismissed as irrelevant. The American Library Association said its Office for Intellectual Freedom reported 273 books were affected by censorship attempts in 2020, many with content that highlighted race, gender and sexuality. Between September and the start of this year alone alone, however, there have been at least 230 such challenges, the organization said in an email to NBC News — a marked acceleration.

As a Black and queer author, I know first and foremost there is an overbearing whiteness to the publishing industry. It is no easy feat to become a published author, much less to have a book be made accessible to the most vulnerable among us in communities all across the country through the public school and library systems.

When I wrote my first book, I Can’t Date Jesus: Love, Sex, Family, Race, and Other Reasons I’ve Put My Faith in Beyoncé, I wanted to lend voice to Black queer men and Black working class folks in the south who are too often unheard, unwelcome, and unwanted. I wanted to write a book that I wish I’d had as a child. I am grateful to be a bestselling author, but I also know a lot of kids in communities across the country don’t have the means to buy my books. They deserve to be heard and feel seen like anyone else — especially through school and the library.

I understand how threatening my existence is to some people, but knowing how many hurdles Black authors in particular must jump to even get our stories out there, I am enraged at how easily authors are seeing their books banned or removed from circulation, which for many students will mean the same thing in practice.

I am not comforted by the fact that books banned by school districts benefit from sales boosts. Such was the case for Maus — the decades-old series of graphic novels about the Holocaust that was excised from classroom curricula by a Tennessee school board last week — which has reportedly jumped to the top of an Amazon bestsellers list. I’m happy people are finding the book in spite of the ignorance of their neighbors, but that doesn’t outweigh how disturbed I am that a book chronicling the Holocaust can be banned. And anyway, the people buying it up on Amazon aren’t the kids who need it most.

I know President Biden and Vice President Harris have a plague to tend to, and there’s a symbolic Supreme Court Justice appointment to be made in February, and they’re still trying to pass something of the Biden agenda through Congress. But the right has launched a new front of the culture war against marginalized authors, and I wish the administration would use its unique power to act on behalf of the Black artists being targeted for telling our stories.

We don’t deserve to be erased — especially not during Black History Month.

February 1, 2022 February 1, 2022 Book banning has returned to American schools. It’s targeting authors who deal with race, sexuality, and gender, and it’s moving with a fervency that should alarm not only anyone concerned about he plight of authors but ultimately anyone worried about how American history is taught, because this is an effort…

February 1, 2022 February 1, 2022 Book banning has returned to American schools. It’s targeting authors who deal with race, sexuality, and gender, and it’s moving with a fervency that should alarm not only anyone concerned about he plight of authors but ultimately anyone worried about how American history is taught, because this is an effort…

What’s really at stake in the Joe Rogan kerfuffle