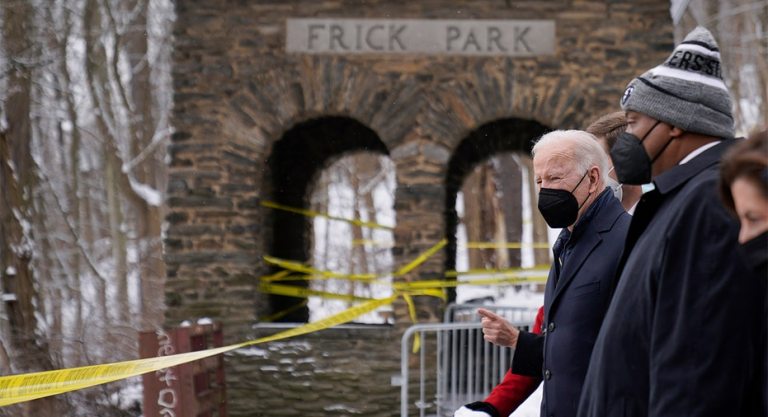 The Biden Era: Bridging the Gaffes

The fact that the name of the park in the background of President F-Up does not escape me.

There’s just something about that Joe Biden toothy gaping smile that tells some people “He’s a nice guy … I’ll vote for him, again and again and again…”, but tells a lot of other people with better brains that he cannot be trusted with your dog, your kid, your money … our nation and Republic. His long and muddled political career from school to the Oval Office has laid more than enough pavement to be a sign for people to not take that turn down that road. But still folks insist on taking that wrong turn. The constantly debunked stories old Joe tells, especially when he’s in front of gathered groups of admiring Americans who vote for him, are chuckled at and shrugged off, yet, some in the media try to help with the Biden fiction and fantasies by defending them as true, when they are not. Mind you, this guy has been doing this crap his entire adult life in public. He has never even been truthful about the accidental deaths of his first wife and their daughter.

And now Joe Biden is the tip of the crooked and twisted spear of the leftist agenda to completely obliterate our country and our rights in order to Build Back Better a 21 century Marxist “democracy”. Pres. Donald Trump points out just a few of the many stark ‘portents’ we are living through in real-time right now…

Lawless political establishments like this should not be allowed to continue. They send young Americans to fight and die for the borders of distant, foreign nations while they throw our borders open to illegal foreign invasion. We fight for other borders but we don’t fight for our own. They torture your children with masks in school while they host parties packed with unmasked donors in New York, San Francisco, and Washington D.C. They restrict your freedom and lock you in your home while they abolish cash bail and release thousands of dangerous criminals, murderers. They release them from jail. They drive up the price of energy for your family while they are shuttled around in limos and airplanes on American taxpayer dollars… 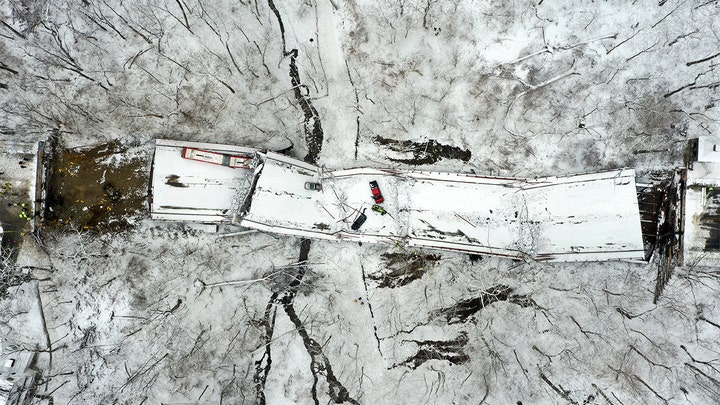 No. Joe Biden is not responsible for the recent bridge collapse a few days ago in the Pittsburgh area. That bridge is the responsibility of local (city/county) and state government(s). And the other fact is that while the left and democrats who are desperately pushing for this next in a long line of ineffective, wasteful, and corrupt “infrastructure” bills, use this recent bridge collapse to bolster the push but to point fingers of false guilt at republicans (and the couple of democrats too) who recently voted against the floundered bill, that particular bridge is a non-sequitur in the infrastructure bill fight. The dems (MOST especially the dems in Pennsylvania government) know it. Their soiled-diapered MSM knows it. Biden knows it, in brief miniscule passing moments between farts and ice cream brain-freeze. And still, as usual, they are blatantly trying to make-hay with it…

NBC-4: Collapsed Pittsburgh Bridge Was Rated in Poor Condition: The bridge is not among the highway and bridge projects targeted for federal funding in the state’s 2021 transportation improvement program

Pittsburgh has 446 bridges. The most in the world. Almost 40% of them are currently in poor condition. Meanwhile, over 40 years of democratic leadership has diverted funds to art projects, bike lanes and incentives for Silicon Valley tech companies to headquarter here pic.twitter.com/iPvztb8O91

Not sure how accurate the above graphic is, but I can say that in and around Pittsburgh is a bridge-lovers dream. And while frightening that the Frick Park bridge collapsed (thankfully nobody was killed), it is very fortunate no other much higher bridges, and bridges spanning over the Three Rivers, was the one to collapse. I literally hold my breath when driving over bridges, especially those very steep ones in the Pittsburgh region. And I know my blood pressure suffers when we drive over Three Rivers. I have frequent bad dreams of my car going over a bridge into water.

Twitchy: Blue-checks are angrier at GOP Sen. Toomey for voting against the infrastructure bill than they are at Dem Gov. Wolf for not fixing the bridge

Shame on the Republican lawmakers who didn’t support the Bipartisan Infrastructure Law.

Pennsylvanian lives are on the line. It’s long past time for the political games to come to an end.

Why doesn’t your state have the state/local tax-funding & gov/department(s) leadership to inspect, properly maintenance & ‘fund’ timely repairs? Why was that bridge not closed? https://t.co/Hzk3e1ywo0

9% of that mammoth bill is going to actual infrastructure.
If you actually read the bills instead of accepting the name or talking points, you would/should be furious.

And that is the stark cold fact in the layout of each and every “infrastructure bill”. As a matter of fact, must I remind you that the left currently in control of the US Congress, and the crayon-scribbling Oval Office have changed the definition of “infrastructure” to be extremely fluid in what exactly that term means at any given politically-expedient moment?

This is an excellent analogy…

The ancient world was full of signs and portents that the high and mighty ignored at their peril. When, for example, Xerxes set out on his campaign against Greece in 480 B.C., Herodotus tells us that “a great portent” appeared…

… At the Battle of Salamis later that year, the Greeks delivered a crushing blow to the Persian navy. Xerxes decided to retreat with the bulk of his army back to Persia. It was a disaster. He lost most of his men to disease, famine, and exhaustion. It was a pitiful remnant that arrived at the Hellespont nearly two months later, only to find the bridges they had built at the outset of their campaign utterly wrecked. Xerxes was rowed across the channel, enraged but broken.

But this just underscores the uncomfortable possibility that, when it comes to Joe Biden, the signs and portents are addressed as much to us as to him.

Biden talks about infrastructure. We’re the ones that have to drive over the crumbling bridges.

We read the news. We know about Biden’s plummeting poll numbers. We know that inflation is out of control. We know that the stock market is skittish if not verging on panic. We look on, amazed, as the president of the United States all but invites Vladimir Putin to invade Ukraine. Memo to the president: When it comes to armies violating the borders of sovereign nations a “minor incursion” is analogous to being “a little bit pregnant.”…

Joe Biden is a walking purveyor of signs and portents. He came to office promising to restore unity and reestablish a sense of “normalcy.” He has done the opposite. The public has gone from being concerned to being afraid. They despair at our porous borders, the empty shelves in our grocery stores, the skyrocketing prices of everything from food and clothing to cars, hotels, housing, and energy. They listen in the night and hear Putin’s and Xi’s saber rattling, the ravings of Iranian mullahs, sounds that are not soothed by the incoherent mumblings of the president of the United States. The omens are everywhere.

Joe Biden came to town bearing a double-decker ice-cream smile. I suspect he is going to leave like Xerxes—confused, battered, alone. Perhaps he’ll have to be rowed across the Potomac back to Delaware if our bridges keep collapsing…

A gaffe bridge too far, even for old Joe…

Rick Moran: Biden’s Pittsburgh Speech a Gafftastic Success: If the success of Joe Biden’s speeches were measured by the number, frequency, and the outrageous stupidity of his gaffes, the president’s Pittsburgh speech would rank as one of his finest.

Hours before Joe Biden went to the city to talk about infrastructure, Pittsburg’s Forbes Ave. bridge over Fern Hollow Creek collapsed. The timing of the bridge collapse was suspicious. Could White House aides have snuck into Pittsburgh the previous day and caused the bridge collapse to make Biden look like a prophet?

Given the president’s standing in the polls, anything is possible.

I firmly believe Moran wants you to insert ‘sarc button’ ^^there^^. Read the whole thing.

Joe Biden traveled to Pittsburgh today to talk about Build Back Better and infrastructure.

Hours before he got there, the Forbes Avenue bridge collapsed, injuring 10 people…

So, he used that as a talking point about the importance of infrastructure. Infrastructure is desperately needed, but I wouldn’t trust for a minute that money allocated by Democrats will go to the things that need infrastructure help.

But Biden faced a different problem when he arrived…

Biden says Conor Lamb is a “senator.” He’s not. pic.twitter.com/Eeev09auVo

WATCH: Biden forgets his infrastructure czar Mitch Landrieu’s name for AT LEAST the third time, calling him the “mayor of LOUISIANA.” pic.twitter.com/XXAhTR6GuU

Biden also keeps doing that weird whispering thing that is truly creepy. Someone must have told him that sometimes one does voice modulation for emphasis. But, they also should tell him how he’s going about it is just wrong — because it just doesn’t come across well at all…

Is there anything creepier than when Biden does than lean-forward-into-the-mic-and-whisper thing?…

Twitchy: President Biden had some, er, interesting moments during his infrastructure speech in Pittsburgh

BIDEN: “One third of the inflation in America is a consequence of the cost of automobiles.” pic.twitter.com/67hXd91x2s

Someone on the team is an imbecile. https://t.co/s7uYGbpHJY

Matt Margolis: Biden’s ‘Anger’ Over High Insulin Prices Is Fake, Here’s Why: Because he is responsible for it…

Posted by Maggie on January 30, 2022 in From the editors The fact that the name of the park in the background of President F-Up does not escape me. BREAKING NEWS: Joe Biden announces he will replace Tom Brady with a black woman. — Randy Griggs (@RandyGriggs13) January 29, 2022 There’s just something about that Joe Biden toothy gaping smile that tells…

Posted by Maggie on January 30, 2022 in From the editors The fact that the name of the park in the background of President F-Up does not escape me. BREAKING NEWS: Joe Biden announces he will replace Tom Brady with a black woman. — Randy Griggs (@RandyGriggs13) January 29, 2022 There’s just something about that Joe Biden toothy gaping smile that tells…

Susan Collins won’t rule out supporting Trump in 2024, but says it’s ‘not likely’