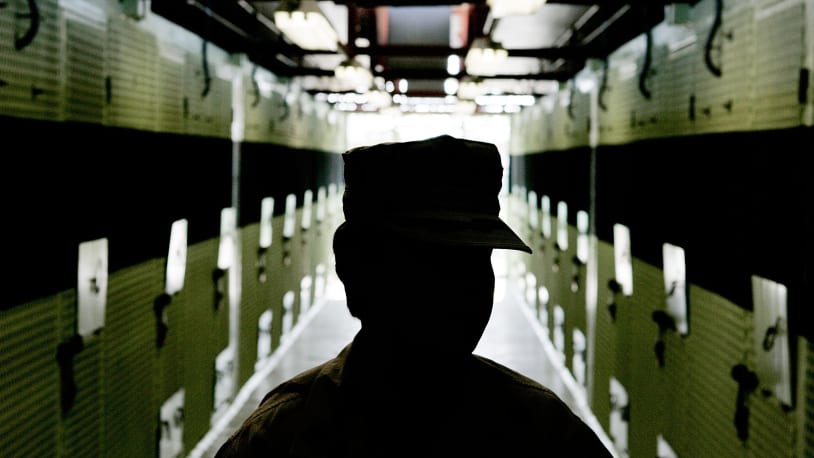 The prison beyond the law

The U.S. has been holding terrorism suspects at Guantánamo Bay for 20 years. Will the camp ever close? Here’s everything you need to know:

Why was Guantánamo created?

The military detention facility first called Camp X-Ray was built in three days in early January 2002, to receive al Qaida and Taliban prisoners captured during the U.S. invasion of Afghanistan. Shortly after Jan. 11, when the first 20 detainees arrived, the Pentagon released a startling photo of the men in orange jumpsuits, hooded and shackled, kneeling on the ground by a barbed-wire fence. The image sparked a national debate over human rights and national security that continues to this day. Over the next 20 years, the U.S. spent $11 billion on the camp as it expanded into a large compound called Camp Delta. Some 780 Muslim men and boys, from Pakistan, Afghanistan, Saudi Arabia, and other countries, cycled through its prison cells, almost all without charges or trials. In the first three years, many were subjected to “enhanced interrogation” techniques such as waterboarding, beatings, and being forced to stay awake or exposed to blaring music for days. Only two were ever convicted of war crimes. After years of gradual releases and repatriations under four presidents, 39 remain in custody.

What is their legal status?

It’s in limbo. While trying to extract information from the prisoners, the Bush administration didn’t want them to be subject to the Geneva Conventions, so it classified them as “illegal enemy combatants,” a term not defined in international law. Trying these suspected terrorists in court, the administration said, was too big a risk: Those acquitted for lack of evidence could go free on U.S. soil and plot new attacks on Americans. So it sent the prisoners to the U.S. military base in Cuba, beyond the jurisdiction of U.S. courts. But a series of Supreme Court cases determined that the detainees could challenge their detention in federal court, and most obtained lawyers.

Who has been detained there?

At the outset, then-Defense Secretary Donald Rumsfeld said the camp was housing only highly trained, hardened terrorists— the “worst of the worst.” A few detainees were, in fact, top al Qaida members, such as the suspected 9/11 mastermind, Khalid Sheikh Mohammed. But many were low-level Taliban or jihadist fighters with no involvement in terrorist plots against the U.S., and dozens of others were later found to be innocent people swept up by Afghan or Pakistani forces chasing the U.S. bounty of $5,000 per capture. Hundreds of inmates were later transferred to other countries, but some were held for years. Seven have died by suicide, and dozens of others have attempted it.

Why hasn’t the prison closed?

When President Obama took office in 2009, he ended the use of torture, and ordered that the Guantánamo Bay camp be closed within a year, with prisoners deemed dangerous given trials and sent to U.S. maximum-security prisons. But with both Republicans and Democrats insisting, rather improbably, that terrorists might escape the supermaxes (which house mass murderers and other terrorists), Congress passed a law barring the transfer of detainees to U.S. territory. In 2018, President Trump reversed Obama’s closure order, and detainees who were slated for release had their transfers delayed. Of the 39 prisoners who remain, 10 are awaiting trial, two were convicted, and the other 27 were never charged. The trials have moved at an agonizingly slow pace. Khalid Sheikh Mohammed and four co-defendants in the 9/11 attack have been in pretrial hearings for years, with their lawyers arguing that the evidence against them is inadmissible because it was obtained by torture.

Will Biden close it?

The Biden administration says it is committed to closing the facility as soon as possible, but it has yet to appoint an official to oversee the process. Meanwhile, Republicans in Congress oppose efforts to release the uncharged prisoners, citing a 2020 declassified intelligence report that said 229 of the more than 700 detainees who have been released have returned to terrorist activities. At a Senate hearing, Sen. Lindsey Graham (R-S.C.) said at least five people in Afghanistan’s current Taliban government are former Guantánamo detainees. “And we’re talking about releasing people,” he said. “This is nuts.”

So is Guantánamo necessary?

In a 2010 memoir, former President George W. Bush conceded that Guantánamo Bay had become “a propaganda tool for our enemies and a distraction for our allies.” Since then, Islamic extremist groups, including al Qaida and ISIS, have continued to invoke the torture and unlawful detention of Muslims there in their recruiting, while a new U.N. report called the site “a stain” on the U.S. commitment to the rule of law. Retired Marine Corps Maj. Gen. Michael Lehnert, who was in charge of setting up the camp, recently told a Senate hearing that it was a mistake for the U.S. to create an extra-legal, offshore prison. “The urgency to gain information had bad consequences,” Lehnert said. “When you forgo generations of legal thought and precedent, bad things happen.”

The U.S. has been holding terrorism suspects at Guantánamo Bay for 20 years. Will the camp ever close? Here’s everything you need to know: Why was Guantánamo created? The military detention facility first called Camp X-Ray was built in three days in early January 2002, to receive al Qaida and Taliban prisoners captured during the…

The U.S. has been holding terrorism suspects at Guantánamo Bay for 20 years. Will the camp ever close? Here’s everything you need to know: Why was Guantánamo created? The military detention facility first called Camp X-Ray was built in three days in early January 2002, to receive al Qaida and Taliban prisoners captured during the…