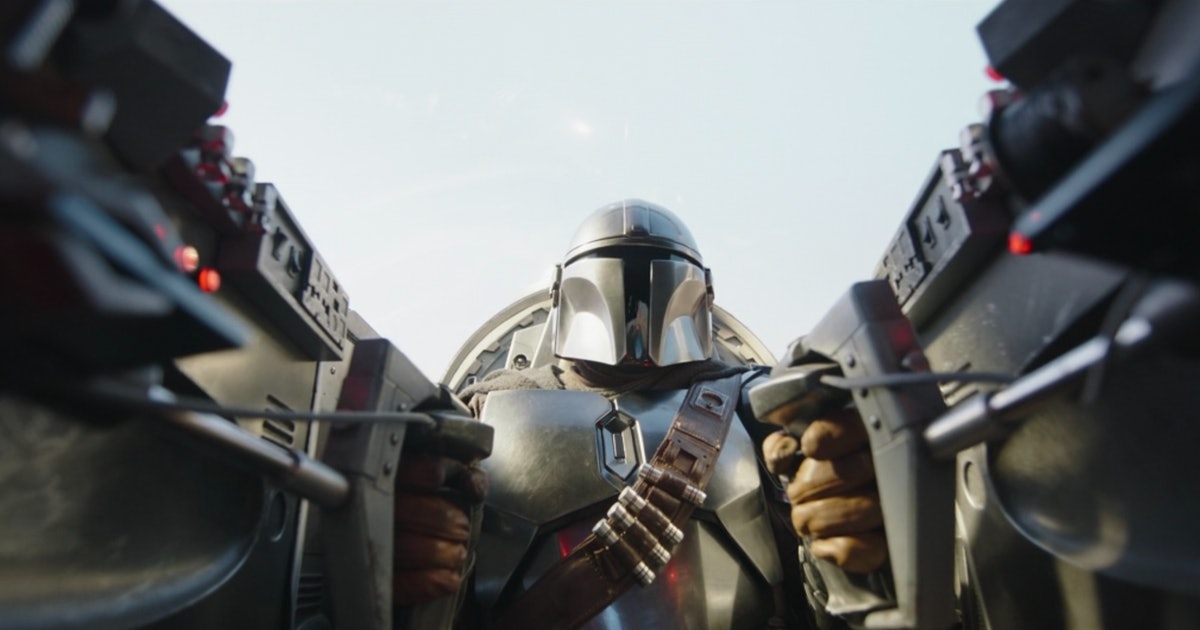 Weapons are part of his religion. It takes an absurdly long time to place them in storage for a commercial flight.

The Book of Boba Fett has passed the midway point of its first season on Disney+. “Chapter 5” might be the best episode so far, and it doesn’t have the title character anywhere in sight. Instead, the show brings back Pedro Pascal as Din Djarin, the hero of The Mandalorian. In fact, the entire episode revolves around Mando, allowing viewers to catch up since we last saw him in the Season 2 finale of his own show.

No longer playing dad to Grogu, Mando is his own man. He’s once again a wandering bounty hunter, except now he’s armed to the teeth with so many weapons he’d make Rob Liefeld’s X-Force blush.

“Baggage” is a subtle but important theme in this week’s The Book of Boba Fett. Though Mando has developed an attachment to Grogu — attachment that’s actually encouraged by the Mandalorian Creed, not forbidden like it is for the Jedi — Mando doesn’t have to think about the survival of anyone but himself.

So he does what empty nest dads often do: He gets a new ride. Fittingly, he’s adopted a newer, slimmer mode of transport. He’s now rocking a refurbished N-1 starfighter, a sleek, nimble ship with a sexier silhouette than the boxy, sperm whale-shaped monstrosity Mando last piloted, the Razor Crest.

Originally built in the days of the Galactic Republic, the N-1 runs so fast that Mando is pulled over by space highway patrol cops on its inaugural flight.

Much of the episode is spent on Mando and his garage aunt, Peli Motto (Amy Sedaris), salvaging the N-1. The process is an entertaining montage, complete with fascinating character details (Peli dated a Jawa?) and the universal satisfaction of watching something old and dirty become new and clean. Those who are really into “Cleaning TikTok” or “Restoration YouTube” must have had a ball with this week’s episode.

But it’s not until Peli utters a throwaway line that the ship’s thematic purpose moves into focus. “Not a gram of fat on her,” Peli says, smacking the N-1 with a towel while sounding like a proud mother. “No one’s catching you in this thing.”

The lean machine that is the N-1 stands in stark contrast to the big, bulky Razor Crest, a ship that has memorably been caught in the crosshairs of Moff Gideon and enemy pilots throughout The Mandalorian. Its bulbous shape makes sense given its origins; according to Wookieepedia, the Razor Crest was an assault ship intended for the Galactic Empire as a patrol craft, keeping a small number of soldiers (most likely Stormtroopers) on hand.

With so much space inside for just one person, the ship became Mando’s personal living quarters. Mando had made a tank into his outer space Winnebago.

The Razor Crest was also ideal for when Mando became Grogu’s caretaker. Children need space to roam and play, and the cozy confines of Razor Crest was a physical manifestation of Mando’s unintended role of a surrogate parent.

But now that Grogu has left the nest, Mando doesn’t need to play foster father anymore. And so his ship doesn’t need all that space and weight. Just as Mando is (still) bogged down by the array of weapons on him, so too was his previous ship a symbol of physical excess. It was necessary when Grogu was present. He’s gone now, so what’s all that space for?

Book of Boba Fett isn’t ruling out a Mando and Grogu reunion. The droid port of the N-1 has been conspicuously hollowed out. It’s not big enough to fit a full-sized person, but there’s still space for someone of diminutive stature. Until then, our Mandalorian at least has somewhere to keep all those weapons.

Weapons are part of his religion. It takes an absurdly long time to place them in storage for a commercial flight. The Book of Boba Fett has passed the midway point of its first season on Disney+. “Chapter 5” might be the best episode so far, and it doesn’t have the title character anywhere in…

Weapons are part of his religion. It takes an absurdly long time to place them in storage for a commercial flight. The Book of Boba Fett has passed the midway point of its first season on Disney+. “Chapter 5” might be the best episode so far, and it doesn’t have the title character anywhere in…

Woody Allen goes out with a whimper