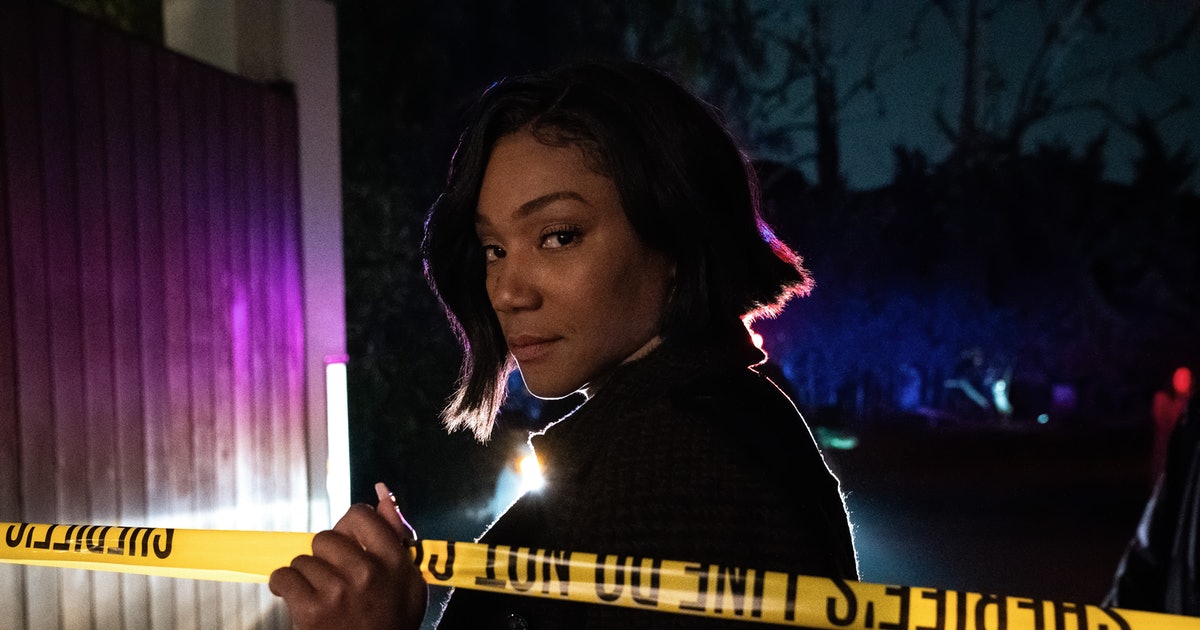 You may have noticed a recent television trend: shows restricted to just one or two locations. Due to the constraints of a global plague, even a big-budget drama like Succession Season 3 felt limited to just a few settings.

The Afterparty is no different, focusing almost entirely on about a dozen characters attending their high school reunion and the afterparty at a nearby mansion. But where that limitation might cause other shows to quickly grow stale, this Apple TV+ murder mystery uses its small number of locations to help it bring a refreshingly fun stylistic approach to the whodunnit genre.

The Afterparty’s episodes all adhere to the same basic structure, and center around a high school reunion that ends with a pop star’s mysterious murder. Each episode focuses on one of the reunion’s attendees as they recount their version of events to a detective (played by a reliably charming Tiffany Haddish) who intends to solve the night’s murder.

By jumping between each character’s perspective, The Afterparty takes a different approach in every episode. The show’s premiere (narrated by Sam Richardson’s nerdy Aniq) feels like a homage to a Richard Curtis-penned rom-com, another dips into animation, and Ben Schwartz’s episode adopts the style of a La La Land-esque musical. (If The Afterparty proves anything, it’s that Schwartz and showrunner Christopher Miller need to team up for a feature-length musical.)

“One of the most playfully made TV productions in years.”

The Afterparty doesn’t just let each of its characters shine, it shows us how they see themselves in the world — even if that means one episode becomes a Fast and Furious-style action film told from the POV of a machismo-obsessed ex-husband (Ike Barinholtz).

This level of genre experimentation means The Afterparty reinvents itself in every one of its episodes while still moving its central mystery forward. With each narrator more unreliable than the last, new facts and versions of the night are established with each testimonial. The result is, quite simply, one of the most playfully made TV productions in years.

The Afterparty counts Christopher Miller, one-half of the duo responsible for films like 21 Jump Street and The Lego Movie, as its creator and director. You’d probably be able to sense Miller’s involvement in The Afterparty without even seeing his name in its credits, though. The series contains much of the same stylistic inventiveness and tongue-in-cheek humor present in so many of his previous projects, despite his frequent creative partner, Phil Lord, serving only as an executive producer and one-time co-writer on the show.

“The real star of The Afterparty is its director.”

Lord and Miller’s knack for working with some of the best comedic performers in Hollywood continues in The Afterparty as well. Anchored by Haddish’s central performance as the inquisitive and ambitious Detective Danner, the series’ cast of suspects includes recognizable players like Ben Schwartz, Sam Richardson, Ilana Glazer, Dave Franco, and Zoë Chao. All of them fully embody the quirky and earnest sides of their characters. But even with a cast as stacked as this one, the real star of The Afterparty is its director.

As the series’ sole director, Miller is not only forced to manage a large ensemble cast but also tackle a variety of genres across The Afterparty’s eight episodes. Thankfully, with the help of his lighting and production crews, he proves himself capable of meeting the show’s unique demands. From packing the series’ Fast and Furious parody with unnecessary lens flares to draining a high school hallway of all its light until it feels like something out of a Scream sequel, Miller fills each episode of The Afterparty with details that ensure they stand on their own while also fitting together like perfect puzzle pieces.

While Miller mostly pulls off The Afterparty’s various structural and stylistic gambits, the series’ scripts don’t always rise up to meet his directorial skill.

Several of the show’s characters, including Glazer’s traumatized Chelsea, Tiya Sircar’s snotty Jennifer #1, and Barinholtz’s arrogant Brett, end up feeling more thinly sketched than their fellow former classmates. That, in turn, makes it challenging to be as invested in the episodes that focus more on them than the series’ other cast members — no matter how impressively Miller and co. manage to bring them to life visually.

“The strengths of The Afterparty greatly outshine its weaker spots.”

As part of its multi-perspective structure, The Afterparty also frequently returns to moments just so it can show them again from a new POV. Usually, the trick works and provides unique insight into moments that could have easily been seen as unimportant when they first appeared. Sometimes, however, it feels like the series is merely returning to hit the same beat its previous episodes did, offering new information that is neither interesting nor surprising.

For instance, a key karaoke scene appears twice, but the show’s change in perspective hardly reveals anything new the second time around. The same goes for a meeting between a trio of characters in a high school hallway, which is revisited three different times to increasingly diminishing returns.

Fortunately, the strengths of The Afterparty greatly outshine its weaker spots. While I have yet to see the finale (Apple chose not to provide critics with early access to it), The Afterparty does enough right in its first seven episodes to warrant a recommendation. If it fails to stick the landing, the series is still entertaining and imaginative enough that not even an anti-climactic finale could take away from its numerous pleasures.

You may have noticed a recent television trend: shows restricted to just one or two locations. Due to the constraints of a global plague, even a big-budget drama like Succession Season 3 felt limited to just a few settings. The Afterparty is no different, focusing almost entirely on about a dozen characters attending their high…

You may have noticed a recent television trend: shows restricted to just one or two locations. Due to the constraints of a global plague, even a big-budget drama like Succession Season 3 felt limited to just a few settings. The Afterparty is no different, focusing almost entirely on about a dozen characters attending their high…

If doctors don’t take women’s health seriously, who will?