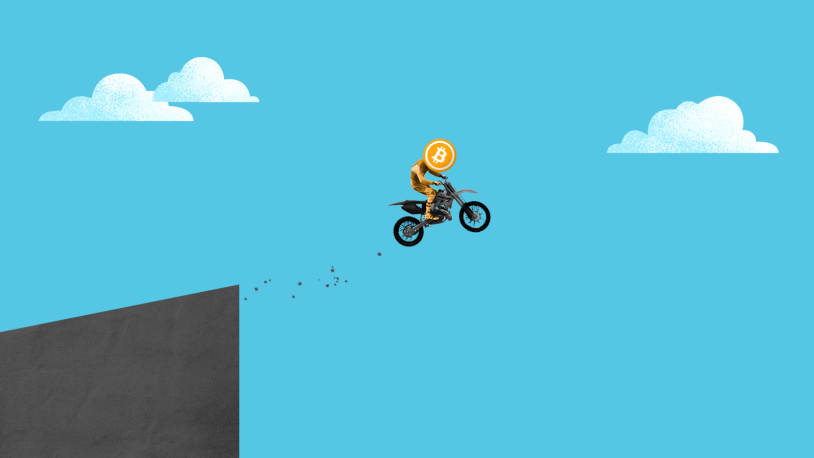 The spectacular risk of cryptocurrency investing

The biggest cryptocurrencies have had a rough few months. If you listened to Matt Damon’s Crypto.com ad implying you’re a sissy girly-man for not buying some crypto, which started running at about the market peak, you’d have lost nearly half your money by now. At the time of writing, both bitcoin and ethereum were down by about 45 percent compared to their highs from last November; BNB was down 42 percent.

Now, they may well go back up again at some point — crashes and recoveries have happened before many times. But it’s an illustration of the incredible risk of cryptocurrency investment. These things are not a futuristic way to get guaranteed returns through the computer; they’re a scammy, useless, and quite possibly doomed hot potato asset.

One amusing thing about the timing of the crypto crash is how it obliterates one of the concept’s principal ideological underpinnings. Bitcoin “is ultimately the only long-term protection against inflation,” wrote Tyler Winklevoss in a blog post in 2020, arguing that it is a better store of value than gold and predicting that it would eventually soar to $500,000. In reality, right now inflation is spiking to its highest levels in decades, and instead of a rush to crypto “safety,” the top coins are all crashing in value — and not by 7 percent but by hundreds of percent on an annual basis.

This is largely because crypto is heavily tied to the functioning of the real economy. In particular, both the big coins eat up abominable amounts of both electricity and advanced computer chips. The “proof of work” system used by both bitcoin and ethereum to create new coins and validate transactions eats up roughly 109 terawatt-hours for ethereum and 204 terawatt-hours per year for bitcoin — or about what the Netherlands and South Africa use, respectively.

Now, ethereum developers have been promising to move to a more efficient “proof of stake” system for years (meaning you would need about $83,000 in ether at current prices to be able to participate as a validator), but they still haven’t done it and there’s no sign of them starting soon.

Bitcoin miners have therefore been chased all over the globe in search of the cheapest possible electricity, often from old, filth-spewing coal power plants, often in impoverished authoritarian countries where relevant officials can be bribed to look the other way at gigantic power overuse. China kicked them out in late 2021 both to cut down on power use and financial fraud.

The current decline of bitcoin is related to the government of Kazakhstan apparently cutting off its miners and eyeing new controls to cut down on their power usage. (Even a dictatorship is well advised to provide a reasonably consistent supply of electric power to keep its population quiescent.)

Major powers around the world are also cottoning onto the fact that the crypto craze is badly exacerbating the computer chip shortage, and thence the shortage of cars, appliances, consumer electronics, and everything else that needs chips, and thence the inflation that is deeply unpopular among voting citizens. Regulations are likely coming in both the United States and Europe that would address the absolute bonanza of scams and frauds in crypto, the resulting systemic financial risk, and also free up capacity at semiconductor fabs for real industries.

That doesn’t speak well of the immediate prospects for crypto prices.

It’s worth emphasizing that all that electricity and all those computer chips are being used up to do things that are explicitly pointless. The entire idea is to force crypto participants to expend useless effort to make it difficult to attack the system (something that is already accomplished quite well on the internet). Here we have the fire of the gods — a fundamental force of physics harnessed to do the bidding of humanity — being created in unimaginable quantities by burning the dirtiest fuel available. And here we have that power driving some of the most sophisticated objects ever made, wearing them out by the train car-load in order to … guess random numbers a quadrillion times a second.

The waste, pollution, and damage to the climate are beyond nightmarish. It’s as if there were a trillion-dollar baseball card or Beanie Babies collecting frenzy, but every time you wanted to create, trade, or sell one, you had to throw an entire litter of kittens into a wood chipper.

And contrary to Winklevoss’s arguments about gold: While that metal is hugely overvalued on any rational business basis, it does have legitimate industrial uses, plus thousands of years of history as a real currency, and (most importantly) it actually physically exists in a hefty and eye-pleasing form that is nice for jewelry or decoration.

Cryptocurrencies, by contrast, are imaginary computer funny money with operations that are totally incomprehensible to the layman and a substantial portion of the crypto enthusiast base alike. As Dan Olsen argues in a brilliant investigation of the cryptocurrency and NFT space, crypto is not good at anything it sets out to do. As the wildly gyrating value shows today, it is not a good store of value. It is a horrendous medium of exchange: It’s very slow compared to the dollar payments system and dramatically more expensive, with just one transaction costing at least a few bucks and up to hundreds of dollars, depending on conditions.

Finally, crypto is exceptionally vulnerable to most kinds of hacking, because it’s virtually impossible to reverse a transaction on the blockchain, and most lack elementary security features other services take for granted. For instance, you can “airdrop” a malware NFT into certain kinds of ethereum wallets without needing permission, and if its owner ever clicks on it, you will receive all the contents of the wallet immediately.

Crypto is ultimately a greater fool scam where the only way to profit is by passing off the hot potato to the next sucker. It has a snazzy techno gloss of cryptography that is hooked into libertarian notions about hard money and general suspicion of the financial sector, but that is only a facade. The only reason cryptocurrencies have value is the general conviction that in future, the line will keep going up. That has made a few people rich beyond the dreams of avarice, because scams can be very profitable if you get out in time.

But as we see today, the line does not in fact always go up. And if a critical mass of crypto owners ever lose faith at once, bitcoin, ethereum, and all the rest are toast.

January 27, 2022 January 27, 2022 The biggest cryptocurrencies have had a rough few months. If you listened to Matt Damon’s Crypto.com ad implying you’re a sissy girly-man for not buying some crypto, which started running at about the market peak, you’d have lost nearly half your money by now. At the time of writing, both bitcoin and ethereum…

January 27, 2022 January 27, 2022 The biggest cryptocurrencies have had a rough few months. If you listened to Matt Damon’s Crypto.com ad implying you’re a sissy girly-man for not buying some crypto, which started running at about the market peak, you’d have lost nearly half your money by now. At the time of writing, both bitcoin and ethereum…