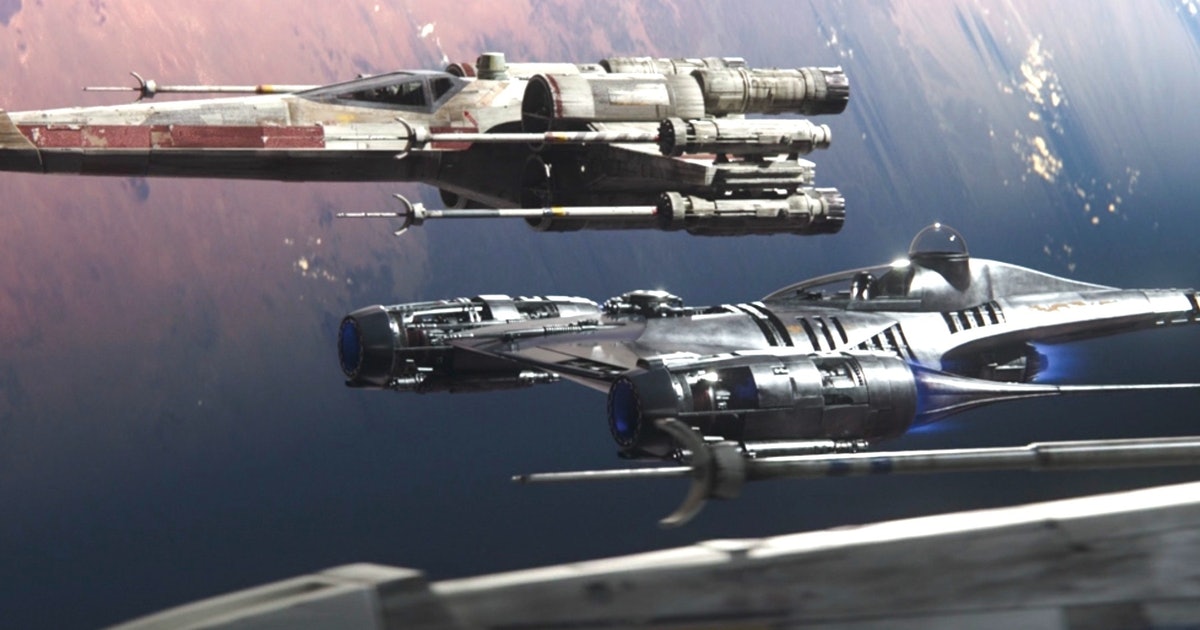 The Mandalorian’s new ship is a Phantom Menace deep cut

Spinning, that’s a good trick! Just ask nine-year-old Anakin Skywalker and Mandalorian cool guy Din Djarin. In an unexpected twist, Mando hit up The Book of Boba Fett and got himself a new ship. And yes, Mando’s smooth new ride is the same kind of starfighter flown by young Anakin Skywalker in The Phantom Menace. Here’s the history of it, why it was such a big deal in 1999, and why it’s perfect that it’s back.

What is the N-1 starfighter?

As Peli Motto (Amy Sedaris) tells Mando in Boba Fett Episode 5, the N-1 starfighter was “handmade by the royal guard and commissioned personally by the Queen of Naboo… I mean these are all handmade, no droids!”

The notion that the N-1 was built by hand is seemingly a new piece of Star Wars canon, but it checks out with what we know about the ornate nature of all things that come from Naboo. How this particular starfighter made its way from Naboo to Tatooine is unclear, but because young Anakin safely landed his N-1 after blowing up a Trade Federation Droid Control Ship, we could speculate that this fighter is Anakin’s old ship.

Either way, in the timeline of the Mandalorian and Boba Fett TV shows, this ship design is at least 41 years old. But because technological advances didn’t exactly shoot forward during the reign of the Empire, the basic tech of the N-1 is still somewhat contemporary with the X-wings that try to pull Mando over during his test drive.

Unlike a lot of spaceships we see in the newer shows, the Naboo ships were specifically designed for the prequels. As concept artist Doug Chiang said in 1999, the ships from Naboo were meant to be “bold and different than anything we’ve previously seen in Star Wars.” With the N-1 returning to Boba Fett, what was once a risky and edgy spaceship design is now a classic.

Although the Star Wars prequels are often mocked for their excessive use of CGI, several practical N-1 models were built for The Phantom Menace, and they were the guides for what ended up on screen.

In terms of live-action canon, the N-1 Starfighters only flew in the prequels, and mostly just in The Phantom Menace. But for Star Wars fans who came of age in the late ‘90s and early aughts, the legacy of this specific ship felt much bigger than just one movie. The N-1 was a major focus of the 2001 PlayStation 2 and Xbox game Star Wars: Starfighter, as well as the 2000 N64 game Battle For Naboo.

But perhaps the deepest cut is the fact that a playable N-1 was hidden in the 1998 N64 game Rogue Squadron, which wasn’t revealed until after The Phantom Menace hit in 1999. When the code was released by Lucasarts, players could suddenly unlock the N-1 Starfighter and fly it during the Rebellion era. And if you did, you know the N-1 was faster than the X-wings, a fact reinforced in Episode 5 of The Book of Boba Fett.

Why the N-1 is perfect for Mando

When Mando gets back from his test run he tells Peli the flight was “wizard.” This references nine-year-old Anakin’s catchphrase “so wizard,” which felt cringeworthy in 1999, but has since become a little endearing. Mando using it is a metafictional hug from the current era of Star Wars to the oft-maligned prequels, while Mando flying through Beggar’s Canyon references both the podracing in The Phantom Menace and Luke’s memories of racing through the same canyon before A New Hope.

Mando flying the N-1 puts him closer to being like Luke Skywalker than Han Solo, which further distances him from Boba Fett too. The ship is sleek, minimalist, and wrapped in misunderstood nostalgia, making it the spaceship equivalent of Mando’s armor.

But most importantly, this ship makes Mando feel more like a hero than an anti-hero. Luke Skywalker is content to fly his X-wing around even after he becomes a Jedi Master. Mando’s no Jedi, but he seems to be embracing a similar vibe.

Now we’ve just got to wait and see if a certain green child joins him for a joyride.

The Book of Boba Fett has two episodes left, which air over the next two Wednesdays on Disney+.

Spinning, that’s a good trick! Just ask nine-year-old Anakin Skywalker and Mandalorian cool guy Din Djarin. In an unexpected twist, Mando hit up The Book of Boba Fett and got himself a new ship. And yes, Mando’s smooth new ride is the same kind of starfighter flown by young Anakin Skywalker in The Phantom Menace.…

Spinning, that’s a good trick! Just ask nine-year-old Anakin Skywalker and Mandalorian cool guy Din Djarin. In an unexpected twist, Mando hit up The Book of Boba Fett and got himself a new ship. And yes, Mando’s smooth new ride is the same kind of starfighter flown by young Anakin Skywalker in The Phantom Menace.…

What do Jawas look like under the hood? Boba Fett just dropped a huge clue

5 years ago, Resident Evil made the most uninspiring post-apocalypse movie ever