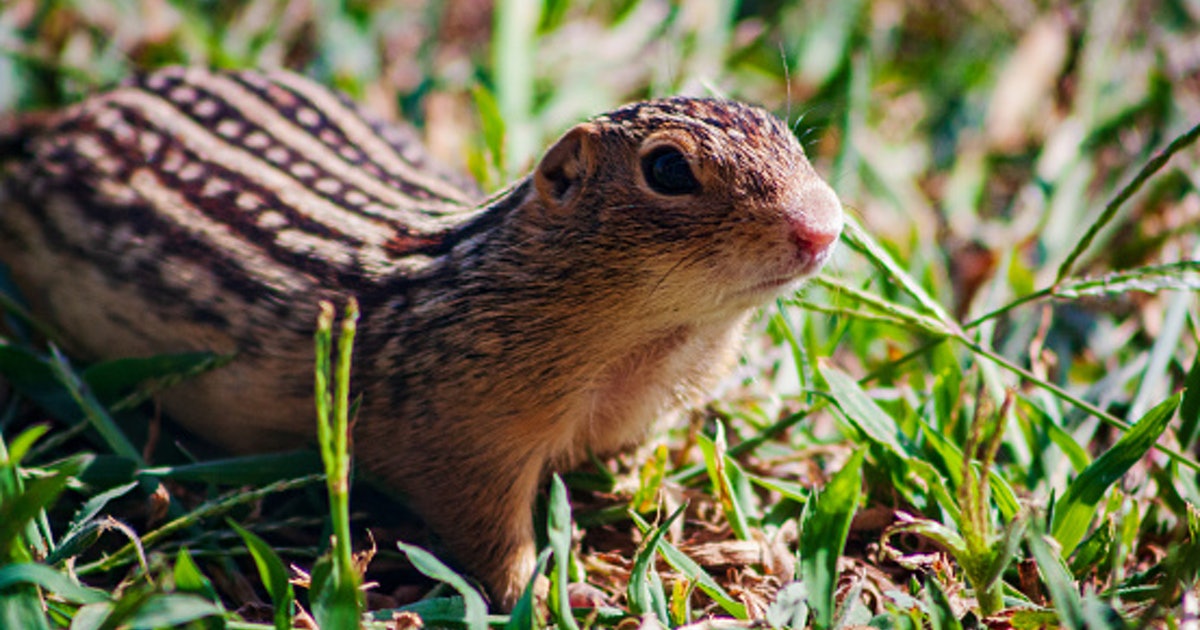 The thirteen-lined squirrel, aptly named for the thirteen stripes on its back, spends much of its time above ground dodging angry humans. But for several months of the year, it gets a reprieve: Like many mammals, this furry rodent spends the winter months hibernating away in its burrows. But rather unlike other hibernating creatures, it reemerges from its long slumber just as brawny as before. Now, scientists may have figured out how it maintains its muscular build without working out — and these findings could help doctors treat muscle wasting diseases in humans, too.

What’s new — A study published Thursday in the journal Science found the squirrel’s active gut microbiome, the ecosystem of bacteria, viruses, and fungi living inside many animals’ digestive systems (including humans), plays a key role in preventing muscle breakdown.

The ground squirrel’s hibernation has long puzzled scientists, who wondered how hibernating mammals can avoid muscle wasting — the biological phenomenon when bodies break down muscle protein for energy during long periods of inactivity or starvation.

During hibernation, the body breaks down muscle protein so it has enough energy to maintain normal functions. The process produces ammonium, which the body converts to urea.

Urea is a nitrogen-containing molecule found in mammal urine. Typically, animals expel urea in their urine, which isn’t a big deal because they can replace it through the food they eat. But hibernating animals don’t have much of a diet.

“With the lack of regular food intake, it has been enigmatic how hibernating mammals overcome this issue,” Felix Sommer, principal investigator at the Sommer Lab and author of a related article on the study, tells Inverse.

The researchers in the new study shed some light on this mystery. They discovered that hibernating squirrels transport urea into the gut. There, certain species of bacteria break down the urea into carbon dioxide and ammonium using enzymes called ureases. The gut microbes then convert nitrogen, which is found in ammonium, to produce amino acids, which are molecules that form proteins (the building blocks of life). The end result? The squirrel offsets the loss of nitrogen and protein that normally occurs during muscle wasting. In other words, the gut microbiome is what keeps the thirteen-lined squirrel alive during its long slumber.

“Understanding how hibernators maintain muscle protein synthesis under prolonged periods of nitrogen deprivation and inactivity is the first step towards translating these processes to humans,” Fariba Assadi-Porter, a co-author on the study and a senior scientist in the University of Wisconsin-Madison’s Department of Integrative Biology, tells Inverse.

The researchers’ findings further confirm a longstanding scientific hypothesis known as urea nitrogen salvage, which asserts that animals use their own gut microbes to recycle nutrients back into their bodies.

Why it matters — But these findings don’t just solve a biological conundrum in squirrels — they could also help potentially hundreds of millions of humans overcome muscle wasting.

“The molecular machinery for urea nitrogen salvaging seem to be present in humans,” Sommer says, adding that pre- or probiotic treatments — which involve live bacteria — targeting this biological mechanism could potentially counteract muscle wasting in humans. This can occur in people experiencing malnutrition as well as elderly people and those who are inactive for long periods of time, such as patients undergoing long hospital stays and astronauts traveling in space.

In addition, “astronauts in the microgravity environment of space experience significant muscle loss despite intensive exercise regimes,” Assadi-Porter says. Therefore, the “mechanisms that hibernators use to offset their own muscle loss problems could theoretically help people in similar situations,” she adds.

The next big question though, is what microbes are responsible for this essential task?

By comparing these different groups, the scientists found six times higher levels of the bacteria Alistipes — which breaks down urea — in late winter hibernating squirrels compared to active summer squirrels. They also found squirrels with healthy gut microbes absorbed more nitrogen in the gut and liver compared to the microbiome-depleted squirrels.

What’s next — Further research will be needed to enhance the scientists’ findings, including the role protein plays in muscle preservation.

For her part, Assadi-Porter aims to use her findings on the squirrel gut microbiome to improve human health and aging, potentially by developing a probiotic that could stimulate muscle conservation. Though that’s likely still many years of research away from becoming reality.

However, the study reminds us that the microbes that live on and inside us are not just there to take advantage of the comfortable home, they play an active and vital role in our health.

Abstract: Hibernation is a mammalian strategy that uses metabolic plasticity to reduce energy demands and enable long-term fasting. Fasting mitigates winter food scarcity but eliminates dietary nitrogen, jeopardizing body protein balance. Here, we reveal gut microbiome–mediated urea nitrogen recycling in hibernating thirteen-lined ground squirrels (Ictidomys tridecemlineatus). Ureolytic gut microbes incorporate urea nitrogen into metabolites that are absorbed by the host, with the nitrogen reincorporated into the squirrel’s protein pool. Urea nitrogen recycling is greatest after prolonged fasting in late winter, when urea transporter abundance in gut tissue and urease gene abundance in the microbiome are highest. These results reveal a functional role for the gut microbiome during hibernation and suggest mechanisms by which urea nitrogen recycling may contribute to protein balance in other monogastric animals.

The thirteen-lined squirrel, aptly named for the thirteen stripes on its back, spends much of its time above ground dodging angry humans. But for several months of the year, it gets a reprieve: Like many mammals, this furry rodent spends the winter months hibernating away in its burrows. But rather unlike other hibernating creatures, it…

The thirteen-lined squirrel, aptly named for the thirteen stripes on its back, spends much of its time above ground dodging angry humans. But for several months of the year, it gets a reprieve: Like many mammals, this furry rodent spends the winter months hibernating away in its burrows. But rather unlike other hibernating creatures, it…

Look: 1,000 mysterious filaments discovered at the center of the Milky Way