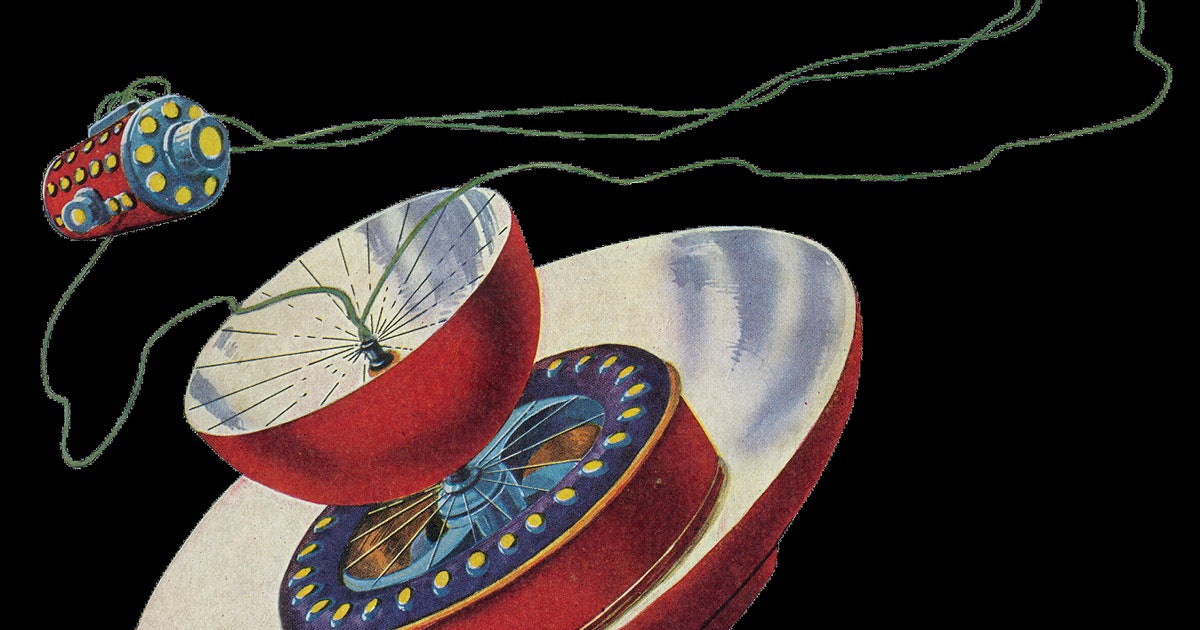 94 years ago, an engineer invented space station design — and inspired a sci-fi classic

The International Space Station has been occupied by astronauts for over two decades, but all good things must come to an end.

In the next decade, NASA plans to replace the ISS with a new station owned and operated by one of three private companies (including Jeff Bezos’ Blue Origin) currently in the running to develop everything from scientific labs to space hotels.

But the ISS (let alone whatever follows it) never would have existed if not for a 19th-century engineer who invented the concept of the modern space station before the first rocket even reached outer space. 94 years ago, a Czech engineer named Herman Potočnik “Noordung” unveiled his dream, a rotating structure filled with laboratories and living quarters spinning around a solar-powered engine.

In the process, Noordung laid the foundation for everything that came after — from the ISS to China’s Tiangong to Jeff Bezo’s O’Neill cylinders and NASA’s lunar gateway that could lay the groundwork for leaving Earth behind.

The father of space station design

In 1968, a rotating wheel-shaped space station danced across the silver screen and changed science fiction forever.

Space Station V in Stanley Kubrick’s 2001: A Space Odyssey immediately became one of the most iconic creations in the history of cinema. The design is largely credited to the late rocket developer, and NASA’s former Marshall Space Flight Center Director, Wernher von Braun. But von Braun was actually influenced by earlier works of many engineers, including Herman Potočnik “Noordung,” whose work von Braun cited in his doctoral dissertation.

Although some earlier scientists had hypothesized what a potential space station would require, Noordung, who was born in 1892 in the Croatian town of Pula, was the first person to plan and design a space station suitable for both scientific research and habitation. (Soviet rocket scientist Konstantin Tsiolkovsky, for example, was the first to define the concept of a space station in 1895 — more than 30 years before Noordung — proposing a space station as a habitat, a scientific laboratory, and an industrial complex, but he never actually designed it beyond a simple sketch.) Noordung published his design in his 1928 book The Problem of Space Travel: The Rocket Motor (Das Problem der Befahrung des Weltraums).

“Since the beginning of time, mankind has considered it as an expression of its Earthly weakness and inadequacy to be bound to the Earth,” the book begins, “to be unable to free itself from the mysterious shackles of gravity.”

In his original introduction, Noordung goes on to state that while space travel was once “unthinkable” and “the stuff of fanciful novels,” it had evolved from a “technical dream” to a “technical question,” one which he felt was completely solvable using the science available to him in 1928.

“Since the beginning of time, mankind has considered it as an expression of its Earthly weakness and inadequacy to be bound to the Earth.”

Nika Teraž, the content development coordinator at Center Noordung, an institute for space technology in Slovenia, tells Inverse that The Problem of Space Travel includes numerous original ideas that underpin our modern understanding of life in space “including artificial gravity, space medicine, and other technical recommendations.”

But it was Noordung’s actual space station design that was most influential. It consists of three parts: a habitat rotation wheel, an observatory, and a machine room. These three elements would all be free-flying components connected by cables on which astronauts would attach themselves so they could travel between them.

The habitat wheel included habitation units (where astronauts would sleep and eat), laboratories, and observatories. It would measure 30 meters in diameter and complete one revolution in eight seconds — the idea was that centrifugal force would create a sense of gravity similar to that on Earth. This was the first design of a rotational space station (seen in everything from 2001 to Elysium). On the front of the wheel’s axis was a concave mirror for gathering solar energy while the back had airlocks functioning as the main entrance.

“Although Noordung’s ideas were never realized, they were a major contribution to future space travel.”

The second part, the machine room, was a solar power plant supplying both the habitat wheel and observatory with electrical energy while doubling as a radio station. The third part, the observatory, was cylindrical in shape and equipped with windows. There was space dedicated for a telescope and other observational devices. According to Noordung, both of these units should serve special experimental assignments, so they lacked gravity. To simplify moving around the observatory, he cushioned all the hard surfaces and edges.

Noordung’s book also dealt with showering, sleeping, oxygen supply, and other basic questions regarding living conditions on a space station. It was the first time the design of a space station had such a complete architectural and structural vision.

“Although Noordung’s ideas were never realized, they were a major contribution to future space travel,” Teraž says. “Wernher von Braun, one of NASA’s leading rocket scientists in the 1960s, cited Noordung’s book in his doctoral thesis, so we know NASA knew about his designs.”

The mystery of Herman “Noordung”

The origin of his Noordung alias remains a mystery, but the most widely accepted theory is a play on words. Ordnung in German means order, and it’s possible that he shuffled the letters and came up with Noordung, implying no order.

Noordung grew up attending military schools and became a lieutenant and expert on railway and bridge constructions. He was sent to the Serbian front during WWI and contracted tuberculosis. Afterward, he earned a doctorate in engineering at the University of Technology in Vienna and dedicated himself to rocket science.

“[Noordung] even joined the university society of aviation technology, which also had its own rocket science division,” Teraž says. “After graduation, he joined the Society for Space Travel (Verein für Raumschiffahrt) where he had his first contact with other prominent pioneers of space travel, including Hermann Oberth [considered a father of astronautics].”

The Problem of Space Travel was Noordung’s first and only published book. It received attention in the rocket science community, drawing compliments and criticisms alike. Willy Ley, an expert in rocketry and space travel critiqued Noordung’s plans but still described them as “of great historical significance.” The illustration of Noordung’s space station was featured on the cover of a science fiction magazine in 1929 and was seen by writer Arthur C. Clarke (the author of 2001: A Space Odyssey and many other sci-fi stories).

But, due to his use of a pseudonym and his early demise at the age of 36, very little is known about Noordung. The first English translation of his book was only published by NASA in 1995.

Noordung left many letters addressing his design unanswered, likely due to his dying less than one year after publishing his book.

He was buried in Vienna, but when his family stopped paying for the grave, the cemetery simply allotted the ground to another family. The grave was forgotten until 2012 when a Slovene gallery owner and collector traveled to find it. Today, Noordung’s grave is still owned by another family, but a memorial plaque to the father of space station design stands nearby.

Even though Noordung spent most of his life elsewhere, the small town of Vitanje in northeast Slovenia is now recognized as his birthplace. In 2009, the town built a space technology center and named it after Noordung.

“The core activity of Center Noordung is to promote space technologies and manifest human achievements in space through the interplay of art and high technologies,” Teraž says.

“It is therefore fully justified to name him the father of space architecture.”

The center’s round building mimics Noordung’s design of the habitat wheel. It’s the first thing I noticed when I arrived. The main exhibition opens with Noordung’s story and a rotational hologram showcases his biggest achievement in all its glory: the space station design. Although small in size, the hologram offers a perfect view of the habitation wheel, machine room, and observatory. In a display case next to it are sectional models of the space station showing what the interior of each of the three elements would be like.

The exhibition ends with the first translated editions of Noordung’s book shining under the bright museum lights. There’s also a VR experience that puts you face-to-face with Noordung’s rotating space station floating out in the blackness of space.

The future of Space Station design

Space technology has advanced immensely since 1928. What pioneers like Noordung, Oberth, and others only dreamed about has become a reality. When they lived, humans hadn’t even left the atmosphere. Today, we’ve colonized our orbit, plans are underway to build cities on nearby planets, (wealthy) civilians are buying tickets on rockets, and private companies will soon be building space stations for NASA.

While Noordung’s three-piece space station was to be built as one interconnected piece, the design of the eventual International Space Station was instead a compound of several modules. The new proposals from private companies for future space stations are following NASA’s previous design of multiple elongated modules covered with solar panels, albeit in a more minimalist fashion.

The designs may not be rotational like Noordung’s, but in terms of our progress in low Earth orbit, they are a giant leap for mankind, built on Noordung’s earliest ideas of life in space.

As Russian historian and museum curator Tatjana Nikolajeva Zhelnina wrote in the preface of the Slovene edition of Noordung’s book, his “design for an inhabited space station prepared the psychological transition from Earth architecture to space architecture in the minds of the people. It is therefore fully justified to name him the father of space architecture.”

In the 94 years since Noordung first conjured his vision of a rotating space station full of scientific labs and powered by solar energy, humanity has come a long way to realizing that vision. We may not have spinning designs (a plethora of space junk surrounding the Earth makes that far too dangerous) or artificial gravity (yet), but astronauts are already carrying out the kind of work Noordung believed was possible.

And who knows, at our current rate, it’s possible his once-far-out ideas could be within reach by the time NASA finally replaces the International Space Station with something new.

The International Space Station has been occupied by astronauts for over two decades, but all good things must come to an end. In the next decade, NASA plans to replace the ISS with a new station owned and operated by one of three private companies (including Jeff Bezos’ Blue Origin) currently in the running to…

The International Space Station has been occupied by astronauts for over two decades, but all good things must come to an end. In the next decade, NASA plans to replace the ISS with a new station owned and operated by one of three private companies (including Jeff Bezos’ Blue Origin) currently in the running to…