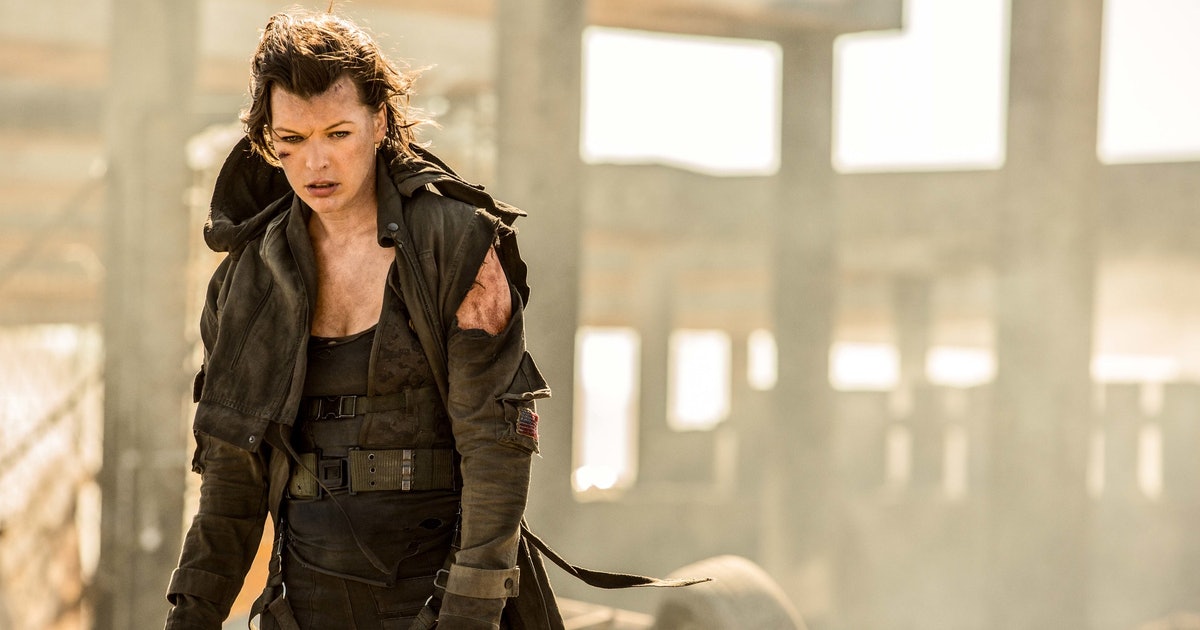 5 years ago, Resident Evil made the most uninspiring post-apocalypse movie ever

Just like that other early 2000s action-horror franchise starring the director’s ass-kicking wife, Resident Evil appeared to wrap up its convoluted post-apocalyptic narrative in January 2017. But while Kate Beckinsale’s Underworld swansong, Blood Wars, was designed solely for long-time devotees, Milla Jovovich’s The Final Chapter essentially stuck two fingers up to those who’d persevered with its previous five entries.

Paul W.S. Anderson could certainly never be accused of succumbing to fan service. For one thing, he robs us of the White House last stand promised at the end of 2012 predecessor Retribution. In an opening exposition dump just as incomprehensible to aficionados as any unlikely newbies, it’s revealed that Jovovich’s fearless warrior Alice was the only survivor of said off-screen battle, with the action picking up in a decimated Washington D.C. several weeks on.

For another, returning fan favorites are in short supply. Ali Larter’s resourceful convoy leader Claire Redfield is the only ally brought back to help save the day, while all the absentees, including the child clone Alice promised to protect in the previous film, aren’t even considered worthy of a mention. And although continuity has never been the series’ forte, the amount of retconning here could put most ‘80s slasher sequels to shame.

The man who engineered the mutating zombie T-virus is no longer original creation Charles Ashford, a key player in second installment Apocalypse, but a character transferred from the video game, James Marcus. The explanation for how the virus spread also differs wildly from that in the original. And despite his violent demise in the third chapter, Extinction, the Umbrella Corporation’s villainous CEO Alexander Isaacs (Iain Glen) pops up again, this time with an added religious zeal and the reveal that Alice only eliminated his clone.

Unfortunately, most of the elements the finale does retain are those which have hampered Resident Evil with its braindead reputation. The obtrusive, headache-inducing industrial score, for example, or the editing techniques so ridiculously frenzied they cause whiplash. Then there’s the painfully inane dialogue (“The trinity of bitches, united in their hatred”) and wafer-thin characterization.

Despite a talented cast of genre regulars including Eoin Macken (Merlin), Ruby Rose (Batwoman), and Fraser James (Origin), The Final Chapter’s batch of human survivors may well be the series’ blandest yet, leaving it difficult to care whenever one inevitably gets savaged by a mutant canine or, in the film’s most brutal demise, sucked into a massive rotating fan.

That said, Resident Evil’s heroine ensures there’s at least a few moments that justify sitting through all the nonsensical revelations and relentless bombast. Jovovich’s not be the most expressive of actresses; she reacts to the major plot twist that completely shatters Alice’s identity like someone wondering if they’ve left their fridge door open. But she does know how to command a set piece, whether she’s nuking a flying dragon, evading a horde of running zombies while being dragged along by a truck, or seeing off an army of gun-toting goons as she’s dangling from a snare trap. Performing the majority of her own stunts, Jovovich’s commitment to a role which doesn’t necessarily deserve much commitment is applaudable.

And while it’s not always clear what’s going on, the visual settings remain impressive. Shot on location in South Africa, the bright Fury Road-esque wasteland of the first act provides a welcome change of scenery. Meanwhile, the return to the CGI-heavy, booby-trapped Hive of Raccoon City, which the once-nefarious Red Queen A.I. (played by Anderson and Jovovich’s young daughter Ever) reveals must be infiltrated within 48 hours to rescue what’s left of mankind, is a neat nod to where it all began.

As everything from Saw to Shrek has proven, the words “final chapter” don’t always mean finality. Anderson certainly leaves things open for a continuation of his love affair with the franchise, and its takings at the Chinese box office suggest Sony will be happy for him to combine his personal and professional lives once more. Johannes Roberts’ Jovovich-free reboot last year grossed only a tenth in comparison.

If this does prove to be the last time we see Alice thwarting the world’s most prolonged evil masterplan, then we can’t exactly say she’s gone out on a high. Like all five previous Resident Evil chapters, the final one is incoherent, devoid of any personality and so overblown it makes Michael Bay look the height of restraint. But in a world where every fanboy’s whim appears to be catered to, there’s something admirable about a franchise closer with such a blatant disinterest in keeping regular viewers satisfied.

Just like that other early 2000s action-horror franchise starring the director’s ass-kicking wife, Resident Evil appeared to wrap up its convoluted post-apocalyptic narrative in January 2017. But while Kate Beckinsale’s Underworld swansong, Blood Wars, was designed solely for long-time devotees, Milla Jovovich’s The Final Chapter essentially stuck two fingers up to those who’d persevered with…

Just like that other early 2000s action-horror franchise starring the director’s ass-kicking wife, Resident Evil appeared to wrap up its convoluted post-apocalyptic narrative in January 2017. But while Kate Beckinsale’s Underworld swansong, Blood Wars, was designed solely for long-time devotees, Milla Jovovich’s The Final Chapter essentially stuck two fingers up to those who’d persevered with…

The Mandalorian’s new ship is a Phantom Menace deep cut