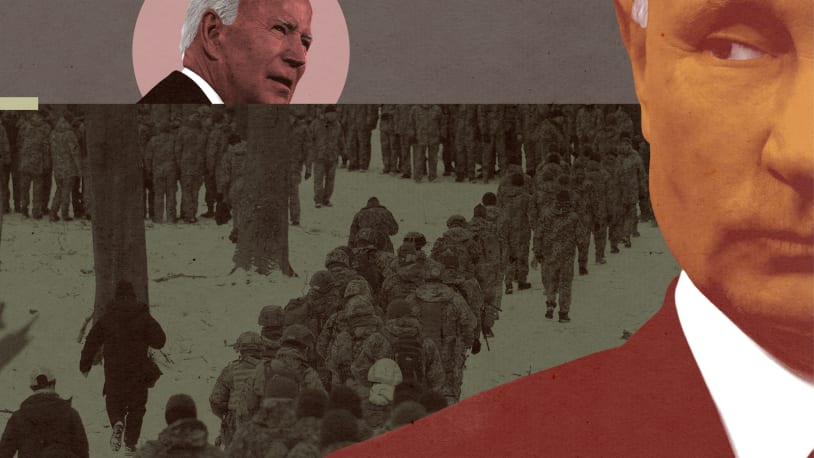 In President Biden’s widely-panned press conference last week, one of his most criticized moments was when he spoke candidly about the situation in Ukraine.

He declared that he expected Putin would “move in,” suggested that a “minor incursion” wouldn’t be as serious as a full-scale invasion, and admitted that because of “overwhelming [military] superiority,” Russia would clearly be able to win a war with its neighbor. While Biden cautioned that there would be “severe costs” imposed on Russia by the United States and its allies in the event Putin did invade, the most serious consequences he mentioned were merely the direct costs to Russia of occupying another country.

To many critics, that sounded at best like weakness, and at worst like a green light for a Russian invasion. They wanted the president to show “leadership” by threatening to halt or reverse a Russian invasion by force. The extreme foolishness of this approach is thankfully apparent to both the Biden administration and to our NATO allies, who have no stomach for a war against a neighbor that threatens them far more than it does ourselves.

But even to many who understand the reality of the situation, Biden’s acknowledgement felt like a diplomatic faux pas. Perhaps we weren’t prepared to go to war, but shouldn’t the president have emphasized that aggression will not stand?

Such thinking, though, is entirely backward. As the president correctly stated, big nations can’t bluff. Claiming that the United States is prepared to take action that it is not in fact considering would be exactly that, and would put pressure on Russian President Vladimir Putin to call our bluff with action. The point of deterrence at this point is not to get Putin to back down entirely, but to convince him that a compromise is a better bet than a strategy of compellence. For that reason, the most important thing for Putin to believe is that an invasion might fail of its own accord — and not because the NATO cavalry came to the rescue.

What are Putin’s aims in threatening, and potentially launching, war with Ukraine? If his goal was to shatter the NATO alliance, the effort has already proved counterproductive. Ukraine is not a NATO ally, is unlikely to ever become one, and has no claim on NATO for its defense. But currently neutral nations like Finland and Sweden, which have a profound interest in the independence of the Baltic states, are now seriously contemplating joining the alliance in response to Russian moves.

If Putin aims to seize and annex the eastern, more pro-Russian portion of the country, the result would be a rump Ukraine with an overwhelmingly pro-Western orientation, eager to cooperate with NATO and press irredentist claims against Russia for its lost territory. Russia would be slightly larger, but ringed by even more uniformly hostile neighbors, and the newly acquired territory would be an expensive dependency rather than an asset.

Because of the obvious downsides of these objectives, Putin’s most likely goal is to reduce Ukraine to the status of a vassal state, a Moscow-allied buffer between Russia and the West, comparable to its neighbor, Belarus. This would be ideologically satisfying to many Russians, who have never really accepted Ukrainian independence, and a clear enhancement to Moscow’s power and prestige. On that assumption, the purpose of war would be to compel the government in Kyiv (or a successor government installed by Moscow) to agree to constitutional changes that would tie Ukraine permanently to Russia.

There’s only one plausible way to stymie this objective, and that is for the people of Ukraine to refuse to accept it, much as they have refused every attempt since 1991 to pull their nation back into Russia’s embrace.

If he invades, Putin would effectively be betting that the people in Ukraine’s west will feel abandoned by NATO and resigned to coming to terms with Russia in order to restore their territorial integrity. But the opposite might happen: Ukrainian President Volodymyr Zelensky’s government could fall and be replaced by a far more frankly nationalistic and anti-Russian one. Germany, leery of openly antagonizing Russia, might nonetheless open the money spigot to Kyiv to prevent a tide of refugees from pouring into the European Union. The U.S., U.K., France, and Poland might not be willing to go to war with Russia, but they are already clearly willing to arm western Ukraine and support it diplomatically.

In this manner, an initial Russian victory might quickly devolve into an ongoing low-level conflict tying down large numbers of Russian troops in an open-ended occupation. That’s not going to do anything to bolster Putin’s popularity or Russian power — which is precisely what Biden highlighted in his analysis of the looming conflict.

A strategy of supporting Ukrainian resistance isn’t riskless for the West by any means. War has a way of spilling over unpredictably, and Russia could retaliate against Western interference by supporting insurgencies against American allies or disrupting energy markets. These are good reasons to hope that diplomacy ultimately prevails — and they are good reasons for Russia to hope likewise, as those options for retaliation all have significant costs for Moscow as well. But compromise is more likely when all sides see conflict as negative-sum and there are available off-ramps to save face.

Before negotiations began, I was skeptical that Putin would take seriously something like true neutrality for Ukraine, even if it were offered, and skeptical as well that Ukraine itself would accept it. As the prospect not only of war but of its always-uncertain aftermath looms larger, perhaps all sides will be more willing to contemplate a compromise that genuinely limits the ambitions of all concerned.

In President Biden’s widely-panned press conference last week, one of his most criticized moments was when he spoke candidly about the situation in Ukraine. He declared that he expected Putin would “move in,” suggested that a “minor incursion” wouldn’t be as serious as a full-scale invasion, and admitted that because of “overwhelming [military] superiority,” Russia…

In President Biden’s widely-panned press conference last week, one of his most criticized moments was when he spoke candidly about the situation in Ukraine. He declared that he expected Putin would “move in,” suggested that a “minor incursion” wouldn’t be as serious as a full-scale invasion, and admitted that because of “overwhelming [military] superiority,” Russia…