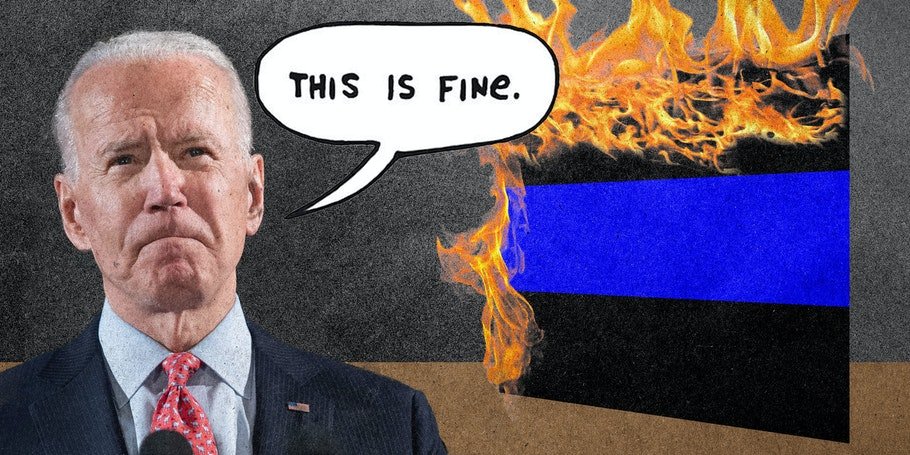 Defunding the police and the vilification of law enforcement are killing morale and leading to a nationwide Ferguson Effect.

As much as they deny and assert otherwise, the Democrats own the Left’s “defund the police” sentiments, and this includes the Biden administration. During the 2020 summer of riots orchestrated by Black Lives Matter and antifa, Democrat leadership didn’t condemn the destruction caused by these riots, but rather defended the somehow noble intentions and cause of the rioters.

The Leftmedia’s infamous lie regarding the rioting and mayhem was that it was all “mostly peaceful protests,” which seemed to epitomize the cognitive dissonance of the Democrats. In fact, when BLM thugs demanded the defunding of the police, not only did many Democrats fail to object, but in several instances they obliged the lunacy, claiming it was the right thing to do.

In reality, Democrat city leaders and politicians effectively gave over the keys of the asylum to the inmates, and the all-too-predictable result was spiking crime that is now roiling many of America’s largest cities.

After decades of a steadily declining crime rate, many cities have seen violent crime suddenly jump to levels not seen since the early 1990s. The Leftmedia and many Democrats pin this on two primary culprits — the pandemic and, more insidiously, “systemic racism.” The second charge is pointedly directed at America’s law enforcement in general. That is the fundamental message of the entire BLM movement, which began in the wake of Trayvon Martin’s death in 2013, but gained a national following after the police shooting of Michael Brown in Ferguson, Missouri, in 2014.

Even Barack Obama’s Social Justice Department couldn’t pin anything on Ferguson Police Officer Darren Wilson for Brown’s death, but that didn’t stop a false narrative from being taken up by the mainstream media and repeated more broadly across leftist-dominated popular culture that racist policing was the big problem. BLM began a campaign of highlighting blacks who died in altercations with police, regardless of the reason, to push the dubious narrative of systemically racist police. What this soon created among law enforcement was what has come to be known as the “Ferguson Effect,” wherein vilified police began to back off proactive policing in order to avoid getting caught up in a situation where they are smeared as racists simply for doing their jobs. That, in turn, led to rising crime and lost black lives.

Following the death of George Floyd in 2020, the Ferguson Effect spread nationwide, and police departments in cities such as Minneapolis, New York, Chicago, San Francisco, Los Angeles, and others once again began to actively pull back on policing, sometimes at the demand of city councils and mayors. Now those cities’ residents are paying the price, as crime — especially violent crime such as homicide — is spiking.

Furthermore, it appears to have become open season on cops. The intentional killing of police officers jumped 59% this past year, as 73 were killed in the line of duty, the most since 2011. And it seems that the problem is only getting worse. Last December alone, 25 officers were killed. Two NYPD officers were murdered in an ambush just this past weekend, bringing the year’s nationwide total to five already.

So with crime steadily becoming one of Americans’ top issues, Biden plans to address the problem by — get ready for this — implementing a police reform agenda. That’s right — the root of the problem is not the criminals being let off easy by a bunch of George Soros-funded soft-on-crime district attorneys, and it’s not Democrat city ordinances that decriminalize such things as shoplifting and drug possession. No, it’s racist cops.

In the coming days, Biden plans to sign an executive order that Republican lawmakers contend will only make matters worse. “These hard-left policies are extremely ill-advised, dangerous to Americans, and would only further demoralize law enforcement,” states a letter sent to Biden signed by seven GOP senators including Ted Cruz and Josh Hawley. “We are baffled as to why this Administration would want to implement this EO, which is tantamount to defunding the police.”

The Washington Examiner reports, “If implemented as written, the order would prevent police departments from purchasing flash or stun grenades, which are nonlethal tools used by law enforcement to disorient suspects in dangerous situations. The order also bans armored cars, which police use to navigate in active shooting situations, almost all drones, and long-range acoustic devices.”

Furthermore, “The draft order’s enforcement structure [denies] local police departments access to money from the Community Oriented Policing Services grant program and the Edward Byrne Memorial Justice Assistance grant program if police departments don’t comply with many of the order’s provisions.” And compliance means “supporting alternatives to arrest and incarceration” and the implementation of the Lefts’s favorite buzzwords — diversity, inclusion, and equity.

In other words, Biden is not really aiming to tackle the problem of rising crime. Instead, President Unity is intent on transforming the very foundation of the American justice system in order to align with his party’s agenda of “social justice.” In this dynamic, it’s not about prosecuting and holding individuals to account for their own actions, but about judging individuals based primarily upon their group and social identity. As a result, the pursuit of real justice is set aside for a caricature of justice that produces actual injustice.

If Biden follows through with his executive order as it is, don’t expect to see the spiking crime rate abate anytime soon.

Defunding the police and the vilification of law enforcement are killing morale and leading to a nationwide Ferguson Effect. As much as they deny and assert otherwise, the Democrats own the Left’s “defund the police” sentiments, and this includes the Biden administration. During the 2020 summer of riots orchestrated by Black Lives Matter and antifa,…

Defunding the police and the vilification of law enforcement are killing morale and leading to a nationwide Ferguson Effect. As much as they deny and assert otherwise, the Democrats own the Left’s “defund the police” sentiments, and this includes the Biden administration. During the 2020 summer of riots orchestrated by Black Lives Matter and antifa,…

Authoritarian Madness: The Slippery Slope from Lockdowns to Concentration Camps