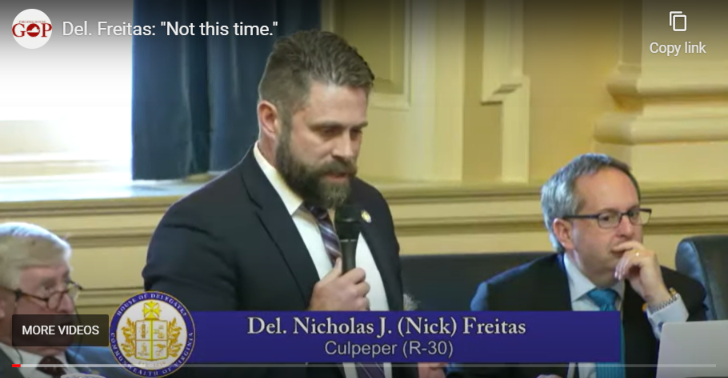 Delegate Nick Freitas Takes House Democrats to Task on Racism: “Not This Time”

After two weeks of being accused of racism, bigotry, hate and division, House Republicans are fed up.

Once upon a time, a handful of media outlets could set the narrative from Richmond and the rest of us would follow. In today’s media environment, the Richmond press corps is not only starved of resources, but digital and new media outlets get to have their say in real time.

In short, the Democrats simply can’t build up their narratives fast enough anymore before Republicans can respond with their own version of events.

Case in point is this afternoon’s fisticuffs in the well of the Virginia House of Delegates, where House Democrats were eager to compare a Northam-era method of providing a hotline to parents in the event Critical Race Theory was being taught in the classroom — something Democrats denied even existed until Youngkin called their bluff and banned racism from the classroom by executive order.

One small problem? Governor Northam used the same method. Worse still, implicit in the criticism from Democrats is that local school boards have the right to keep parents in the dark about what is being taught in the classroom — and Delegate Kathy Byron (R-Bedford) wasted no time getting to the heart of the argument:

When did what goes on inside a classroom become a state secret? Transparency goes hand in hand with a parent’s right to oversee the education of their children. Said simply, parents need to be able to be aware of what is being taught in the classroom.

Yet the coup de grace came from Delegate Nick Freitas (R-Culpeper) whose fury and anger were palpable.

More importantly, it was shared by many on the Republican side of the aisle.

The moment someone actually stands up and says, “Wait a second, no. I’m not going to accept that,” if you want to debate me on the merits of our particular policies, I am happy to have that discussion. But the moment you claim — with no evidence other than we don’t agree with a particular policy position — the moment you claim that makes us sexist or racist or bigoted, Mr. Speaker, I got news. This was tried during the election cycle.

You have a lot of parents coming to their elected officials asking questions about what was going on in their schools, and the initial response was “Oh, it’s not there,” and then when they saw evidence that it was based off of what their kids were coming home and saying to them, and they went back and re-issued their concerns, they were told “Oh, well then you must be a racist.” Because that has been the repeated narrative coming from certain members on the other side of the aisle. And there’s been a lot of times where we just sat here politely and just took it.

Mr. Speaker, not this time.

I understand you found a winning issue, Critical Race Theory, once again using the old Southern Strategy to use race as a wedge issue, to use black bodies as a prop in your campaigns…

…because I know when you use say that word race sometimes that makes people pay attention, and those people who have pent-up racial issues, this is something they can embrace. I ask you to be very careful about continuing to use this kind of language in an attempt to rally your base.

The line that pushed the House of Delegates over the top? Delegate Scott took direct aim at Governor Youngkin’s faith:

…the first things that I recall him saying was that he had a strong prayer life and that he was praying for everybody.

For those unfamiliar with this, this is an open violation of the rules of decorum for the House of Delegates — Rule 57 to be precise.

Before members of the chamber could leap to their feet, Speaker Todd Gilbert (R-Shenandoah) gaveled the chamber to order and reminded Delegate Scott that he could continue under proper order.

For Republicans, this should be a window into the measure and depth by which some members of the House Democrats actually believe in Critical Race Theory. They know what it is; they know what it is designed to achieve. They hope that by using the magic words of bigotry, racism, sexism will overcome reason, discernment, and charity.

Yet if the words of Freitas and Byron mean anything — and if the sentiment among House Republicans is any indicator — it is that House Democrats better get used to losing arguments.

Governor Youngkin is said to have gone this afternoon to meet with Delegate Scott in person over his comments attacking Youngkin’s faith.

We suspect this meeting will be entirely private.

Gilmore on the State of Play in Ukraine

Jim Gilmore is a former governor of the Commonwealth of Virginia and served as ambassador to the Organization for Security and Cooperation in Europe (OSCE) under President Donald Trump.

Gilmore will be speaking to the Montgomery County GOP tonight at 7:30pm regarding his latest op-ed in the pages of Foreign Policy. You can watch it on Facebook or YouTube, or by heading over to the Montgomery GOP website for their Direct Line series.

By Shaun Kenney January 25, 2022 After two weeks of being accused of racism, bigotry, hate and division, House Republicans are fed up. Once upon a time, a handful of media outlets could set the narrative from Richmond and the rest of us would follow. In today’s media environment, the Richmond press corps is not…

By Shaun Kenney January 25, 2022 After two weeks of being accused of racism, bigotry, hate and division, House Republicans are fed up. Once upon a time, a handful of media outlets could set the narrative from Richmond and the rest of us would follow. In today’s media environment, the Richmond press corps is not…

Is Virginia About To Enact European-Style Regulations On Abortion?