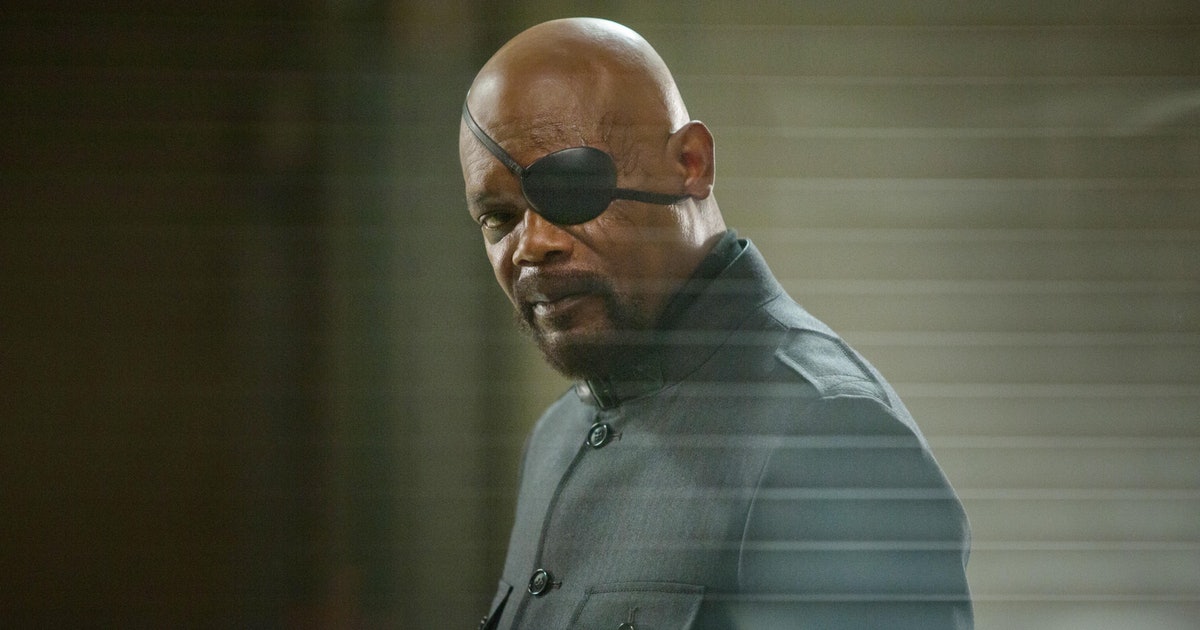 It’s been a minute since anyone saw Nick Fury.

The most dedicated fans of the MCU can tell you it’s most likely that Secret Invasion will take place after the monumental Avengers: Endgame, which isn’t out of step from other recent Phase 4 releases. But leaked set photos hint at more interesting possibilities, including Secret Invasion possibly taking place much farther into the future, or way back in the past.

What Happened? — On January 23, photos of Marvel’s Secret Invasion were taken from the set of the show’s current UK leg of production and shared on Twitter by photographer Alan Milner (@almilner05).

On their own, the photos spoil little about the plot of Secret Invasion. The pictures capture Samuel L. Jackson in full make-up as Nick Fury, including his damaged left eye with scars and a much different wardrobe than he’s normally worn in the MCU.

Trading in his black leather jacket and eye patch for a fisherman’s beanie, a greenish brown turtleneck, and a pea coat, Fury looks nothing like the badass he typically appears to be. Instead he seems incognito, maybe even retired. But since it’s Nick Fury we’re talking about, it’s doubtful he’s just out for a leisurely stroll in downtown West Yorkshire.

Based on Jackson’s physical appearance for Secret Invasion, there could be more to the new Marvel series than has been implied so far.

Past vs. Future — What’s most intriguing about Jackson in Secret Invasion is his bushy gray beard and the lack of his signature eyepatch. For starters, Fury has never looked this rough before. And with the eyepatch missing, the series opens up the possibility of Secret Invasion taking place during or after The Winter Soldier, the last time Fury was ever seen without it.

Since Fury’s life right after Winter Soldier remains shrouded in mystery, Secret Invasion may finally answer questions that fans have been pondering for years. On the flip side, Fury’s unkempt facial hair could also mean the movie takes place far after Endgame.

Even during his recent appearances in the MCU, Jackson’s beard was still black and trimmed neat. Fury’s beard in Secret Invasion looks more grown out, and it’s unlikely Fury would ever use Just For Men. Fury might have just stopped caring about keeping up appearances after experiencing something like the Blip, so there’s also the possibility that Secret Invasion takes place farther into the MCU’s future.

The Inverse Analysis — More than any ongoing Marvel project, Secret Invasion has been the hardest to crack before its premiere.

Based on the 2008 Marvel crossover by Brian Michael Bendis and Leinil Francis Yu, the show will follow Nick Fury and his efforts to stop an invasion of shape-shifting Skrulls who’ve infiltrated all facets of Earth’s population. The comic had the Avengers fight back but, with the MCU currently lacking an active Avengers team, it appears only Nick Fury is on deck to stop the invasion.

Nick Fury and “mysterious” are synonymous. Despite his multitude of appearances in the MCU, there’s so little actually known about his life and story. Secret Invasion, the first Marvel project that could be considered a “solo” Nick Fury story, is most likely going to take place after Avengers: Endgame. And with so many confidential secrets in Fury’s history, Secret Invasion could finally provide a few answers.

Secret Invasion will premiere on Disney+ in 2022.

It’s been a minute since anyone saw Nick Fury. Last seen in the credits of Spider-Man: Far From Home almost three years ago, Samuel L. Jackson’s mysterious ex-S.H.I.E.L.D. director will soon star in Secret Invasion, a new Marvel television series coming to Disney+ in 2022. The most dedicated fans of the MCU can tell you…

It’s been a minute since anyone saw Nick Fury. Last seen in the credits of Spider-Man: Far From Home almost three years ago, Samuel L. Jackson’s mysterious ex-S.H.I.E.L.D. director will soon star in Secret Invasion, a new Marvel television series coming to Disney+ in 2022. The most dedicated fans of the MCU can tell you…