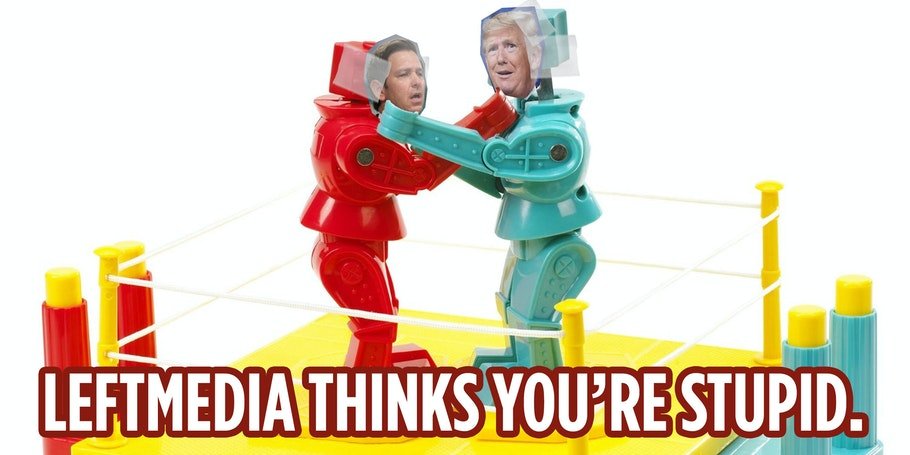 The Leftmedia Is Trying to Divide Republicans on Trump

The mainstream media is doing its best to start a fight between Donald Trump and Florida Governor Ron DeSantis.

Rich Lowry is a smart guy and a solid conservative, but the editor-in-chief of National Review is also — at least in one column — a useful idiot of the Left. Why? Because he’s unnecessarily stirring the 2024 Republican pot at a time when the party should be singularly focused on retaking Congress in November’s 2022 midterms. Nothing is more important than Republican unity right now. Everything else can wait.

In his most recent column, Lowry asks whether Florida Governor Ron DeSantis could beat Donald Trump. “The past and current master of the GOP sees a future threat arising,” he teases.

Why even ask? Perhaps it was an excruciatingly slow news day, and perhaps he couldn’t find a single thing about which to critique the current administration. Otherwise, why pose a purely speculative question that only serves the needs of the Democrats and their mainstream media brethren?

“Obviously, it’s also insanely early,” Lowry writes. “But the Trump-DeSantis story line is inherently alluring, given the chances of a collision between two men who have been allies and the possibility of the subordinate in the relationship eclipsing the figure who helped to elevate him.”

We agree with Lowry that it’s “insanely early.” So, again: Why even ask? We can practically see the Never-Trumpers and the anti-populist Establishment Republicans and the child-molestation enablers at The Lincoln Project rubbing their hands with glee.

Why go there, Rich? Why take the bait? DeSantis is the youngest governor in the United States, and he’s running for reelection in November. Why not talk about that? Why not talk about how effective and popular his policies have been in the Sunshine State, and how his willingness to punch back at media bias should be a model for future Republican leaders both statewide and nationally?

Columnist Matt Margolis smelled this rat back in July, when he called out hard-left MSNBC contributor Gabriel Sherman for this dubious claim in Vanity Fair: “The sources agreed that DeSantis and Trump are on an inevitable collision course as the 2024 GOP field takes shape. ‘There’s going to be a blowup,’ a prominent Republican said. ‘Trump [bleeping] hates DeSantis. He just resents his popularity,’ a Trump confidant told me.”

Really? How many “Trump confidants” are talking candidly to MSNBC? And if Trump hates DeSantis so much, then why has he named him as a possible 2024 running mate? Trump was an early and strong supporter of DeSantis during his 2018 governor’s race and has said plenty of kind things about him since. DeSantis is the youngest governor in the United States.

This isn’t to say that Lowry’s column is complete rubbish — far from it. For example, he writes, “There’s simply never going to be a GOP revelation in which the rank and file suddenly decides, ‘It was a mistake to ever embrace Donald Trump, and now we want to be the party of Adam Kinzinger.’” Here, he’s spot-on. The Republican Party is still Donald Trump’s party. No one else is within a country mile of him. A recent 2024 presidential poll, for example, had Trump at 67%, Mike Pence at 9%, and DeSantis at 8%.

Conservative columnist Mollie Hemingway has a great take on all this. As she writes, “A con doesn’t work when the marks are on to it.”

And indeed, the marks are on to it — the “it” being an offhand remark from Trump about politicians refusing to discuss their vaccination booster status. As Hemingway writes:

It’s not an accident that corporate media are trying to pit former President Donald Trump and Florida Gov. Ron DeSantis against each other. Among Republicans, the former president and current governor of Florida are popular for their policies and willingness to fight the media. That means they’re a threat to the establishment. But as clever as the media figures running the operation apparently thought they were, neither of the top Republicans took the bait, understanding that it only serves their political opponents’ interest to have them squabbling.

Trump was unfailingly complimentary of DeSantis in a recent interview with Fox News’s Sean Hannity, dismissing news of a rift between them as “fake news.” As for DeSantis? “This is what the media does,” he said, “and you cannot fall for the bait. You know what they’re trying to do. So don’t take it. We need everyone on board. Not just Republicans but independents. We have a chance to broaden our coalition.”

Nice try, mainstream media. But they’re on to you.

The mainstream media is doing its best to start a fight between Donald Trump and Florida Governor Ron DeSantis. Rich Lowry is a smart guy and a solid conservative, but the editor-in-chief of National Review is also — at least in one column — a useful idiot of the Left. Why? Because he’s unnecessarily stirring…

The mainstream media is doing its best to start a fight between Donald Trump and Florida Governor Ron DeSantis. Rich Lowry is a smart guy and a solid conservative, but the editor-in-chief of National Review is also — at least in one column — a useful idiot of the Left. Why? Because he’s unnecessarily stirring…

Joe Biden Is Toxic Even to Democrats