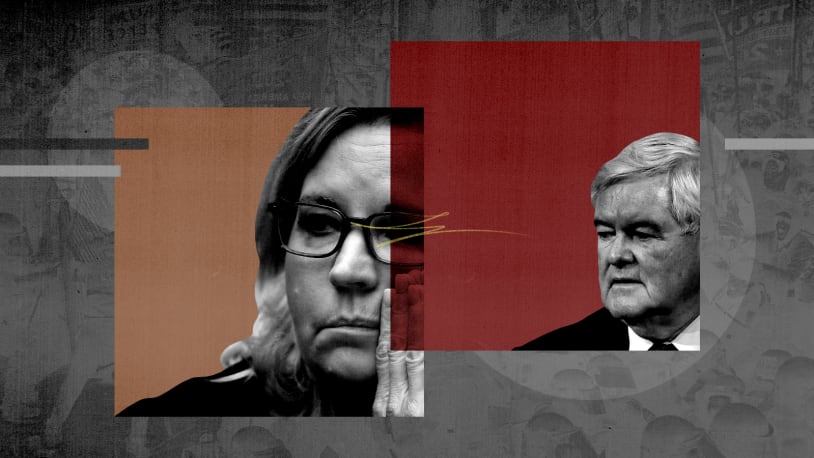 The congressional committee investigating the Jan. 6 putsch has been most notable for its timidity and hesitation. It’s been operating for nearly a year, and only recently has it started producing any juicy material. One reason, apparently, is fear of retribution — Hugo Lowell reports at The Guardian that the committee is hesitant to subpoena House Minority Leader Kevin McCarthy (R-Calif.) because he will probably be speaker soon and may retaliate in kind.

That fear isn’t baseless, but it’s only half the picture. Democrats need to be honest with themselves about what they’re facing: Republicans will retaliate against them no matter what committee members do. Once back in power, they’d exact “vengeance” even if Democrats had never convened the committee at all.

Just consider former Speaker of the House Newt Gingrich, who said on Fox News over the weekend that the Jan. 6 committee members should be jailed. “This is all going to come crashing down,” he predicted Sunday. Committee members are “the ones who, in fact, I think, face a real risk of jail for the kinds of laws they’re breaking.” (He didn’t specify those laws, of course, because there are none.)

Or consider the lot of Timothy J. Heaphy, who’s working as lead investigator for the committee. He was on leave from his position as chief lawyer for the University of Virginia — but Republicans recently won statewide elections in Virginia, and they’ve since sacked Heaphy. The message is clear: Anyone who participates in the investigation of the Trump putsch can already expect retaliation on political grounds.

If that’s not enough evidence, consider that McCarthy has also already promised to retaliate for Democrats kicking Reps. Marjorie Taylor Greene (R-Ga.) and Paul Gosar (R-Ariz.) off their committees — Greene for eye-poppingly bigoted and deranged social media posts, some of which endorsed violence against Democratic leaders, and Gosar for posting an edited anime video showing him murdering President Biden and Rep. Alexandria Ocasio-Cortez (D-N.Y.).

And the example of Benghazi is instructive, too. When the American consulate in the Libyan city was sacked in 2012, Republicans spent literally years “investigating” former Secretary of State Hillary Clinton over her alleged fault in the matter — which didn’t mean the initial decision to intervene in Libya, which was legitimately terrible, but, per crack-brained conspiracy theories, that she had somehow gotten U.S. troops killed on purpose.

Illustrations abound because this kind of thing is central to Republican political strategy: They work themselves into a foaming-at-the-mouth tantrum over some imagined or overblown offense, get party-line coverage from right-wing media, then bully mainstream outlets into “reporting the controversy.” This is why a minor breach of email security protocols — something half the Trump administration did on a virtually daily basis, incidentally — became by far the most-discussed single story of the 2016 election.

Heading toward 2024, Republicans are bent on retaking the presidency by any means necessary, and they’re certain to repeat and escalate this strategy if they do win the House and/or the Senate in the 2022 midterms. Committees will be impaneled to “investigate” every theory circulating in right-wing fever swamps: Hunter Biden’s laptop, Nancy Pelosi’s ice cream fridge, AOC’s visit to Florida — you name it.

Occasionally, these probes might even find something embarrassing that can be trotted out for extensive New York Times coverage. Democrats will be kicked off committees for any reason or no reason — heck, I wouldn’t be surprised if McCarthy and his caucus remove every Democrat from every committee on the first day of the next Congress. (Maybe they’ll start a new Jewish Space Laser Committee for Greene and Gosar, too.)

Even in a less drastic scenario, though, the Jan. 6 committee is sure to come under special scrutiny when Republicans are next in power. Thus far, little of the public understands former President Donald Trump attempted to seize power by force or grasps the Republican Party’s overt turn against democracy. This isn’t because we need more investigation to expose hidden facts — it all happened in plain view, live on television — but because Democrats have not convinced a critical mass of the population of what was really at stake in the Capitol riot last year.

In part, it’s because there is no messaging infrastructure on the left to rival that of the right, and in part it’s because Attorney General Merrick Garland evidently won’t prosecute Trump and his top cronies for blatant sedition. Without those consequences, even storming the Capitol seems like politics as usual. Stories like Politico‘s recent report that Trump drew up an executive order directing the military to seize voting machines throughout the country come and go in a day because they play as an oddity of recent history instead of another piece of evidence in a former president’s criminal trial.

The GOP is betting that won’t change. They’re betting Democrats will remain too chicken and disorganized to meaningfully punish Trump’s schemes. And they’re betting that threatening the people who might make the stakes clear to the public will help keep Democrats duly tame.

The Jan. 6 committee thus has two options: They can carry on with their work at all possible speed, including subpoenas and even arrests of top Republicans, and endure whatever backlash might come — or they can give up and endure the exact same backlash anyway. It’s up to them.

The congressional committee investigating the Jan. 6 putsch has been most notable for its timidity and hesitation. It’s been operating for nearly a year, and only recently has it started producing any juicy material. One reason, apparently, is fear of retribution — Hugo Lowell reports at The Guardian that the committee is hesitant to subpoena…

The congressional committee investigating the Jan. 6 putsch has been most notable for its timidity and hesitation. It’s been operating for nearly a year, and only recently has it started producing any juicy material. One reason, apparently, is fear of retribution — Hugo Lowell reports at The Guardian that the committee is hesitant to subpoena…