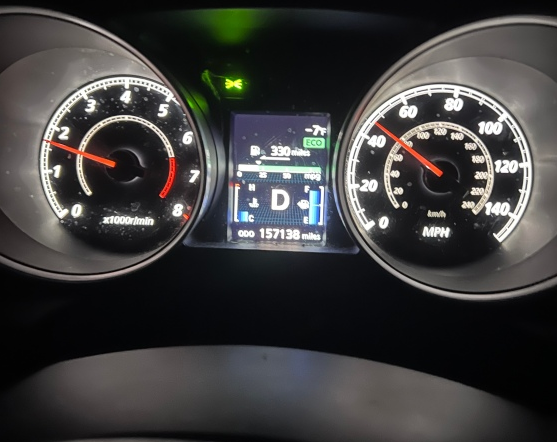 Here in NE Ohio, Hell is trying to freeze-over. I woke at 4:00am to discover our power was out on the coldest night of the year so far. There was already a chill in the house, so, it had to have gone out roughly a half an hour before I woke up. My Weather Bug on my battery depleted iPhone said it was 1 degree outside. I lit a few candles so we could navigate in the dark, all the various cable/internet/computer whatnots no longer glowing to throw nightlight in the rooms. Threw extra blankets on my husband, and on our daughter when I went into her room to remove her deflated CPAP mask that was no longer feeding her air pressure. The above photo was sent to me by one of my other daughters on her way to work at the hospital very early this morning. “It keeps dropping!”, she texted. Yeah, that’s how it works. You’d think that crawling toward sunrise the temp would start going up. Nope. Anyhow, the power came back on here just before 6:30am, and the furnace has been playing catch-up with the thermostat since then.

Observation: When the power came back on I was able to use the ‘smart TV’ and the internet, that had rebooted ahead of the cable service coming back online with our box, to watch local morning news. When the cable finally finished its reboot I saw on its menu guide that no longer is there Saturday morning cartoons! I mean, WTH, man?!?!? When did that happen? But I guess we have more than enough ridiculous characters SLAM-BAM-SPLAT bumbling through our society that make reality even more unbelievable than inane animation of Saturday morning cartoons. Eh, they’d just politicize them anyway. AmIright?

And you thought the mask and vax “Karens” have been bad? Just wait until they get themselves some of these little whatnots and start self-patrolling your public spaces…

NEW: Billions of federal dollars are flowing toward tutoring to help kids make up for pandemic missed learning. Much of that tutoring will take place over a computer screen — a similar learning mode to the one that showed poor results the past 2 years. https://t.co/JUUJeCcBHb

5. One Maryland mother whose son, with ADHD, struggled during closures, told me the idea of online tutoring as a fix for losses caused by online school “confounds me.” She pays $450/month for in-person math tutoring for her 2 kids. This remains out of reach for most families.

Twitchy: Feds to spend billions on virtual tutors to make up for losses due to virtual schooling

Animal management division of Hong Kong Agriculture and Fisheries department cull hamsters inside a pet shop where a worker is infected by Covid-19 Delta variant on Tuesday Jan 18, 2022. The infection prompted tests on hundreds of animals, with 11 hamsters showing up positive. Hong Kong ordered a cull of 2,000 hamsters on Tuesday and warned pet owners not to kiss animals after a new cluster of COVID-19 cases was traced to the pet shop. Hundreds of samples were collected from animals also including rabbits and chinchillas, but only the hamsters have tested positive so far. The authorities said about 2,000 hamsters in 34 pet shops and storage facilities would be put down humanely. Anyone who purchased a hamster after Dec. 22, 2021 should hand them over to authorities for culling and not leave them on the streets, the government advises. EYEPRESS/SUNNY MOK

WALENSKY: “We’re pivoting our language…you need to get your booster in order to be up to date.” pic.twitter.com/l0frQEY3V1

Biden’s CDC Director says the definition of fully vaccinated is being changed to include the booster, and “fully vaccinated” will now be called “up to date.”pic.twitter.com/WgLKU80Gms

THIS LAST HEADLINE, LADIES AND GENTLEMEN, IS THE LOGICAL END POINT OF THE EDUCATION ESTABLISHMENT…

Every communist country has removed children from the parental hold. Every. The schools became government indoctrination complexes jamming propaganda and collectivism into kids’ brains. Communism has been the humanity’s world history’s most massive, oppressive, and deadly religious cult for more than a century.

Aaron Rodgers is spot-on in his “truth to power” hit…

“When in the course of human history has the side that’s doing the censoring and trying to shut people up and make them show papers and marginalize a part of the community ever been [the correct side]?” the quarterback told the outlet. “We’re censoring dissenting opinions? What are we trying to do? Save people from being able to determine the validity on their own or to listen and to think about things and come to their own conclusion? Freedom of speech is dangerous now if it doesn’t align with the mainstream narrative? That’s, I think first and foremost, what I wanted people to understand, and what people should understand is that there’s censorship in this country going on right now.

“Are they censoring terrorists or pedophiles? Criminals who have Twitter profiles? No, they’re censoring people, and they’re shadow-banning people who have dissenting opinions about vaccines. Why is that? Is that because Pfizer cleared $33 billion last year and Big Pharma has more lobbyists in Washington than senators and representatives combined? Why is the reason? Either way, if you want to be an open-minded person, you should hear both sides, which is why I listen to people like Dr. Robert Malone, Dr. Peter McCullough. I have people on the other side as well. I read stuff on the vaccine-hesitancy side, and I read stuff on the vaccines-are-the-greatest-thing-in-the-world side.”

He added that it didn’t “make sense” to him to censor everyone who questions the so-called “mainstream narrative.”

VIDEO: Laura Ingraham: Liberals claim every political move is ‘for the children’ but the truth is ‘dark and sinister’: Pelosi claims she’d ‘be prepared to throw a punch for the children’ if necessary

No Saturday Morning Cartoons? No Problem, We Still Have Bozo Biden and Other Clowns:

Earlier in the week I heard somebody on a radio talk show saying a good friend of theirs is pensively admitting to her “buyer’s remorse” about voting for Joe Biden. The talk show host said he asked her why she voted for him? (paraphrasing alert…)

Radio Host: But, um, you still voted for Biden … and now you’re surprised at where the country is now, huh?

VIDEO: Bill Maher panics about Dem prospects in 2024: ‘America has lost its faith in Joe’ and ‘their bench is so thin!’

Kyle Morris: Biden goes over the top praising Kamala Harris: ‘I love you’

Caitlin McFall: ALLIES RATTLED: One year after touting ‘America is back’ on world stage, all eyes on Biden as Russia tensions flare

“Man this place that I run is a real shithole. Ah well, next.”

“Yeah, boy, how did that happen?” he looked around asking. https://t.co/XYNUwrXyct

Here in NE Ohio, Hell is trying to freeze-over. I woke at 4:00am to discover our power was out on the coldest night of the year so far. There was already a chill in the house, so, it had to have gone out roughly a half an hour before I woke up. My Weather Bug…

Here in NE Ohio, Hell is trying to freeze-over. I woke at 4:00am to discover our power was out on the coldest night of the year so far. There was already a chill in the house, so, it had to have gone out roughly a half an hour before I woke up. My Weather Bug…

Is there any way to stop America’s mass shootings?