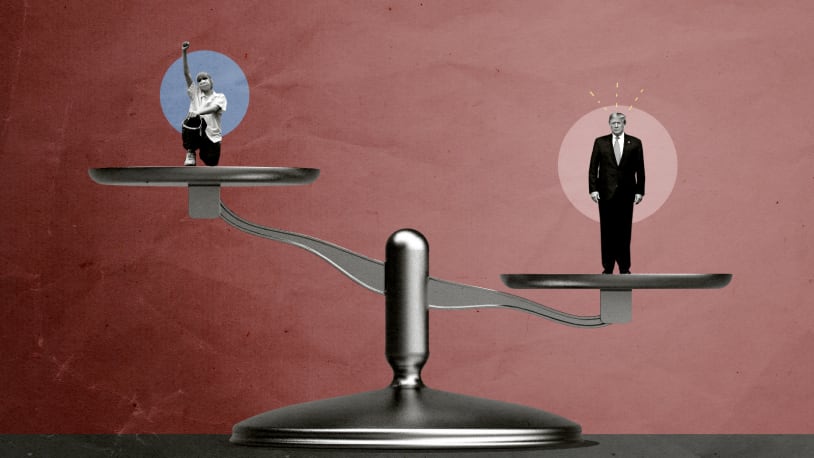 The question has dominated prestige media since Donald Trump emerged as the frontrunner for the Republican nomination in 2016, and especially since his campaign of election denial culminated in violence on Jan. 6 last year. For decades, conservatives have appealed to personal virtue, the rule of law, and constitutional authority. Was it all just a sham to conceal a darker current of opposition to cultural change, racial equality, and democracy itself?

A new essay by Jonathan Rauch and Pete Wehner in The New York Times is the latest attempt to answer. Trying to be reasonable, they meet what they regard as the most powerful response head-on. Sure, there are problems with Trump and the MAGA movement, Rauch and Wehner’s conservative interlocutors might say. But the threat posed by the left outweighs those objections, justifying support for Trump in the past, present, and likely future.

Although they’re associated with Never-Trump factions, Rauch and Wehner deserve credit for their refusal to reduce conservative support for Trump to bullying moralism, bigotry, or authoritarianism. That stance reflects their professional associations — Rauch moves in libertarian circles and is a senior fellow at the centrist Brookings Institution, and Wehner is a vice president at the conservative Ethics and Public Policy Center — which would hardly have been possible had they regarded most potential allies as incipient fascists. The problem is that Wehner and Gerson don’t explain why conservatives, including intellectuals, journalists, and others who profess to care about ideas and principles, are so disaffected. That makes it impossible to understand their relationship to Trump as a genuinely tough call rather than an obvious error of judgment.

The presumed case for loyalty to Trump that Rauch and Wehner sketch rests on the danger of what used to be called political correctness. In particular, they emphasize threats to free speech, association, and religious practice that seem to be mounting in schools, big corporations, and cultural institutions.

Rauch and Wehner reject depictions of the Democratic Party as monolithically supporting these trends. After all, it nominated Joe Biden, not Rep. Alexandria Ocasio-Cortez (D-N.Y.). But though they also recognize the influence of a “progressive movement … increasingly under the sway of a totalistic, unfalsifiable, and revolutionary ideology that rejects fundamental liberal values like pluralism and free inquiry,” they conclude that’s not enough reason to tolerate Trump’s efforts to overturn the outcome of the 2020 election.

If vague fears about wokeness were the only reason to stick with Trump, Rauch and Wehner would have a powerful case. But social media censorship and dubious curricula are just a few of conservatives’ worries about the direction of the country in general and the Democratic Party in particular. Other issues are at least as important — probably more so.

First, Rauch and Wehner don’t discuss the pattern of protest, riot, and crime wave that went national after the murder of George Floyd. For conservatives, the accommodating responses of prominent figures and institutions in the media, professions, and politics show they’re dangerously unfit for power. Few, if any, praised looting or murder per se, but they also did nothing to challenge a dubious narrative of systemic racism that seriously overestimates the number and racial disparity of police killings.  For many conservatives, that provided a kind of implicit permission to indulge without fully endorsing claims of massive electoral fraud that culminated on Jan. 6.

Rauch and Wehner allude to this tendency when they note Biden hasn’t literally defunded the police. He couldn’t even if he wanted to, because control of local police forces isn’t in his purview. But they don’t see the connection between the administration’s positions on criminal justice and immigration, the latter of which is an issue well within its authority. For conservatives, immigration enforcement is fundamentally about maintaining order. At best, Biden and his party look helpless against a surge in border crossings. At worst, they can be suspected of aiding and abetting evasion of the law by favored constituencies.

Liberals and progressives tend to dismiss such fears as a racist conspiracy theory, and some political scientists have found support for Trump and minimizing the importance of the Jan. 6 riot are correlated with the belief that whites don’t enjoy social advantages or may even face discrimination in today.

Whites obviously aren’t at risk of anything like the opression African Americans once faced. But objections to the sweeping conception of racial equity that the Biden administration has adopted aren’t crazy, either. In The Washington Free Beacon, Aaron Sibarium reported how federal guidelines have encouraged some states, including Utah and Minnesota, to give preference to racial minorities in the distribution of COVID therapeutics (a report echoed by Trump at his Arizona rally last week). Narrowly literal fact checks of Trump’s characteristically overstated description of the policy fail to refute the underlying concern.

You might review those criticisms and conclude that, even if accurate, none justify subversion of basic constitutional functions like the certification of presidential elections. But it’s not obvious that those functions were in good health before Trump stepped onto the stage. Belief that American governance has radically strayed from its original sources is a constitutive element of modern conservatism.

That old argument has been energized by the pandemic. Although they are nominally limited to advising legislatures and executive officers, medical bureaucrats like National Institute of Allergy and Infectious Diseases chief Anthony Fauci and leaders of administrative agencies like the Centers for Disease Control and Prevention (CDC) have acquired an outsized role in determining the policy response to COVID — including at state and local levels. In addition to partial lockdowns and mask mandates, that influence extends to recommending changes to voting procedures including extended early voting, drive-up voting, and expanded mail-in voting. You can’t understand why so many Republicans believe the election was somehow “rigged” without acknowledging how arbitrary and confusing those changes were, even if they were opportunistically magnified by Trump and right-wing media.

Other considerations might enter the calculation of costs and benefits, including Biden’s flailing performance in foreign and economic affairs. But I should put my cards on the table: For me, even a stronger version of the conservative case for Trump fails. Like my colleague Damon Linker, I see Trump as a classic demagogue. The framers might have a hard time recognizing the Constitution they drafted in current practice, but they knew the elevation of such a person to high office is a mortal threat to republican government.

Yet if I weren’t already convinced of that, Rauch and Wehner wouldn’t persuade me, because they don’t get the diagnosis right. As a result, they fail to understand why even principled conservatives are willing to accept MAGA as the lesser of two evils — and why some even see it as a positive good. Above all, Trump stands for defiance of mainstream expectations about what’s possible in the 21st century. For conservatives who already see the past three decades as an almost continuous disaster, that’s a hard bargain to reject.

January 21, 2022 January 21, 2022 What’s wrong with conservatives? The question has dominated prestige media since Donald Trump emerged as the frontrunner for the Republican nomination in 2016, and especially since his campaign of election denial culminated in violence on Jan. 6 last year. For decades, conservatives have appealed to personal virtue, the rule…

January 21, 2022 January 21, 2022 What’s wrong with conservatives? The question has dominated prestige media since Donald Trump emerged as the frontrunner for the Republican nomination in 2016, and especially since his campaign of election denial culminated in violence on Jan. 6 last year. For decades, conservatives have appealed to personal virtue, the rule…

Democrats can shore up democracy or attack SCOTUS — not both

Will DeSantis run against Trump in 2024?