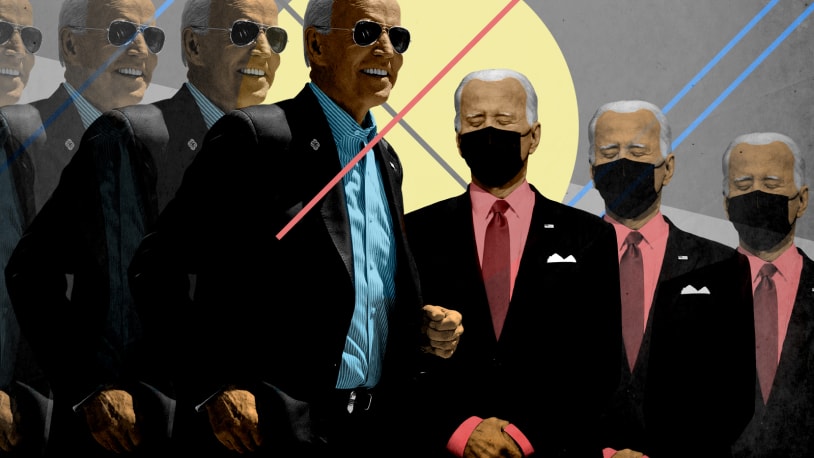 The futility of Biden’s 1st year

It was supposed to be “an FDR-sized presidency.“

In the spring and summer of 2020, after Joe Biden had rolled up the Democratic nomination and polls were predicting a decisive, double-digit victory over incumbent President Donald Trump plus big gains in Congress, the possibility of a real governing majority for Democrats felt tantalizingly real. Instead, the election was closer than anticipated, leaving the new president with almost unworkably narrow majorities in the House and especially the Senate. In the year since his hopeful inauguration, President Biden has been frustrated at almost every turn.

The warp-speed evaporation of Biden’s popularity will be compared to the similar first-year erosion for Trump in 2017. But the process was markedly different. Biden has not deliberately engineered a series of constitutional crises, nor has he corruptly abused his power in the ways that chipped away at his public standing. While Biden’s rhetoric about the voluntarily unvaccinated has grown increasingly harsh, much of the public shares his contempt for the people deliberately keeping the pandemic roiling. And whereas Trump managed to become broadly disliked despite overseeing a booming pre-pandemic economy, Biden’s low marks are due significantly to problems he inherited and, realistically, can only do so much to address.

It didn’t start out this way. Biden and his new Democratic majority delivered quickly on their promised relief bill last March, sending $1,400 checks to every American adult and providing a variety of subsidies for hard-hit states and municipalities. The administration also quickly righted the ship on the Trump administration’s train-wreck of a vaccine rollout, moving toward broad vaccine availability for all adults months earlier than planned. With momentum building toward a bipartisan infrastructure package and a broader social spending bill, COVID cases dropping to barely perceptible levels, and a “hot vaxx summer” of jubilation for the vaccinated, Biden declared independence from the virus on July 4 and began preparing for a post-pandemic future.

In a lot of ways, that was the last truly positive moment for the president in his first year in office. By late July, it was clear that the Delta variant of the coronavirus, first identified in India, was more infectious and able to cause some “breakthrough” infections in fully vaccinated people. Experts moved from hopeful talk of “herd immunity” to a more ominous and uncertain discussion of a world in which COVID is endemic. Sure enough, by summer’s end, another full-blown COVID wave was sweeping across the country.

More politically disastrous for the president than the fact of the variant itself was the way the administration seemed utterly unprepared for it, then again for the even more transmissible (but thankfully less deadly) Omicron variant. Long after Israeli data demonstrated the need for a third shot, the administration deferred to overly cautious federal scientists, undermining public interest in boosters and needlessly exposing millions to more risk before finally approving an additional shot in stages starting in September.

The rollout of vaccines for kids under 12 was treated without any of the requisite urgency that had been applied to the adult vaccines, and when the Omicron wave arrived in December, Americans were shocked to find basic pandemic infrastructure — free rapid tests and high-quality masks — were in perilously short supply. These failures can no longer be blamed on Trump, and the public has taken notice.

Alongside these demoralizing setbacks in the pandemic were other developing political problems. In the 50-50 Senate, controlled by Democrats only by virtue of Vice President Kamala Harris’ tie-breaking vote, the president’s agenda stalled out over the summer. Sens. Joe Manchin (D-W.Va.), Kyrsten Sinema (D-Ariz.), and perhaps a handful of others refused to alter the filibuster rule to proceed with crucial voting rights and election security reforms. Manchin in particular got cold feet about the president’s signature Build Back Better social spending package, which would create universal pre-K, subsidized daycare, paid family and medical leave, and other desperately needed reforms that promised to relieve the economic burden of millions.

Then, in late August, the administration’s plan to withdraw from Afghanistan — a decision that had broad bipartisan appeal in the abstract — ran headlong into the unexpectedly rapid collapse of the Afghan National Army and the dramatic Taliban takeover of the country. What was supposed to be an orderly exit turned into a tense and sometimes violent escape, punctuated by scenes of chaos at the Kabul airport and a suicide bombing on Aug. 26 that left 13 American service members and 169 Afghans dead. The desire to end the “forever wars” seemed to evaporate, at least temporarily, when Americans were confronted with the reality of turning the country over to the Taliban and facing the cold truth that our 20-year effort to rebuild Afghanistan had been for nothing all along.

Ultimately, the U.S. performed an extraordinary airlift, ferrying 120,000 people out of the country in two weeks. But the political damage of the early missteps was done. With congressional Democrats deadlocked on the president’s agenda and a public growing weary of the endless pandemic, Republicans smelled blood. By September, Biden’s approval ratings had collapsed, and Republicans had pulled even in generic ballot polling of the 2022 midterms. In Virginia, Republican gubernatorial candidate Glenn Youngkin beat the hapless Democrat Terry McAuliffe in a state Biden carried by 10 points. Youngkin’s relentless flogging of moral panic over critical race theory was credited with this win, but it probably had more to do with the perception that Democrats didn’t care enough about ongoing pandemic-era disruptions to student learning and parental fatigue.

Further demoralizing the party’s base has been the lack of urgency around shoring up democracy itself. Experts have been warning for years about the GOP’s authoritarian turn and the need to take aggressive action if Democrats ever found themselves with another trifecta in Washington. Well, Democrats got their trifecta — and still have yet to take a single meaningful step, even after the terrifying Capitol riot on Jan. 6, 2021. Now GOP-led states are enacting ever-more restrictive voting policies, Republican putschers across the country are plotting a more sophisticated version of Trump’s 2020 coup attempt, and the GOP base is consumed with a lurid conspiracy theory about how Democrats stole the election.

As he begins his second year in office, then, Biden’s tasks at hand are much the same as they were at the start of his first. His priority still must be to get two steps ahead of the pandemic rather than consistently falling two behind. That means an Operation Warp Speed-style investment in pan-coronavirus vaccines, deployment of Defense Production Act procedures to scale up supplies of the game-changing Paxlovid treatment, and mustering what remains of America’s state capacity to finally make rapid testing available in quantities sufficient to meet everyone’s needs.

Just as politically important is the need for presidential leadership and creativity in getting Democratic holdouts in the Senate on board for some version of Build Back Better as well as a filibuster carve-out for voting rights legislation. Biden has a suite of unused executive powers he should begin to deploy, and he must continue to search for a deal with Senate holdouts so the party has something — anything — to run on later this year.

Progressive hopes for a truly transformative presidential term are dead, but there’s still time enough before the midterms to ensure the Democratic trifecta doesn’t die, too.

January 20, 2022 January 20, 2022 It was supposed to be “an FDR-sized presidency.“ In the spring and summer of 2020, after Joe Biden had rolled up the Democratic nomination and polls were predicting a decisive, double-digit victory over incumbent President Donald Trump plus big gains in Congress, the possibility of a real governing majority for…

January 20, 2022 January 20, 2022 It was supposed to be “an FDR-sized presidency.“ In the spring and summer of 2020, after Joe Biden had rolled up the Democratic nomination and polls were predicting a decisive, double-digit victory over incumbent President Donald Trump plus big gains in Congress, the possibility of a real governing majority for…

Wednesday Hump Day Newsfeed: I May Have to Return to This Dirty Habit…

Biden Was Warned Months Before Pullout of Taliban Takeover