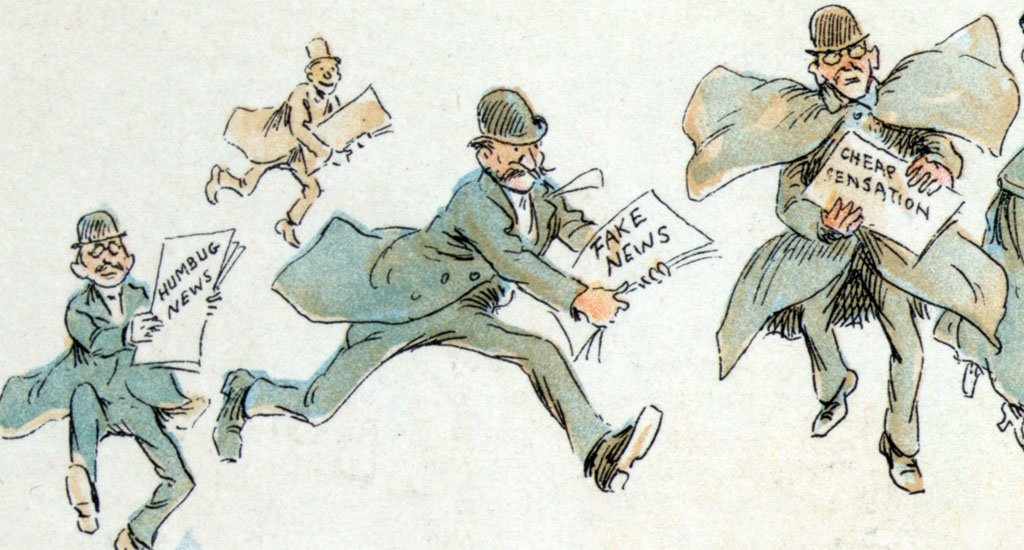 FACTCHECK: Facts Can Be Artfully Arranged to Drive Political Narratives!

Can we simply end the pretense of factchecking yet?

Harry Frankfurt commented once that facts matter to two sorts of people: those who believe in the truth and liars seeking to distort the truth.

Yet there was a third sort — one might say a purveyor of and peddler in bovine excrement — who was more dangerous than the liar, because while a liar is what he is with respect to truth, the connoisseurs of cow manure have no such relationship to truth. Whatever is useful towards the achievement of an objective is the only currency that matters.

For myself, I have always gotten along rather well with Warren Fisk with Virginia Public Media. Fisk comes off as a guy who simply loves journalism in the best sense of the old school.

Politifact and Snopes are both notorious for their left-leaning inclinations. In fact, CNN’s own factchecker hasn’t done a fact-check on the Biden administration in over six weeks — which seems rather incredible given Biden’s activity regarding vote registration, Eastern Europe, and the coronavirus pandemic.

So it comes as no surprise that the factcheckers would be factchecked themselves. Quis custodiet ipsos custodes and all that.

Once again, the inestimable Jim Bacon rides to the rescue regarding a VPM Politifact from Fiske that claims Youngkin fudged the numbers a bit as the governor decried the state of Virginia’s public education system:

“Virginia schools have a lofty reputation but lately we’ve not lived up to that reputation,” Youngkin, a Republican, said in a Jan. 17 address. “In fact, our educational standards for math and reading are now the lowest in the nation.”

Fiske’s response? Not so fast. While Virginians might have one of the lower federally-ranked state standards, Virginia students are testing better than their peers. In an apples-to-apples contest, Virginia’s public education system defies the numbers and is a better producing product than the national metrics might suggest.

Of course, Jim Bacon is having none of that:

Warren Fiske with VPM News “fact checked” the statement. Citing the National Center for Education Statistics, he noted that, yes, Virginia’s 4th-grade proficiency standards for reading are the second lowest among the 50 states and 4th-grade math standards are the lowest. But Youngkin leaves out critical context, Fiske contends. The scores of Virginia students in national standardized exams are “near the top” for 4th graders, and “high” in math and “average in reading for 8th graders.

“Youngkin’s claim, without elaboration, wrongly suggests that Virginia students are being taught less than their colleagues across the country,” writes Fiske. “So we rate his statement Half True.”

Translation: “Technically speaking, Youngkin’s statement was 100% accurate. But I’ll read between the lines and decipher what he was hinting at, and the meaning I impute to his words is wrong.”

Bacon notes that the core metric here isn’t whether Virginia students perform well on tests, but rather whether or not Virginia’s public schools are actually teaching our students.

Two real problems emerge. First, despite the advantages Virginia enjoys in both economic strength and demographic sophistication, Virginia students aren’t testing much better than mediocre. Second and perhaps more damning is that Virginia’s public education system during the Northam administration has crumbled in terms of providing excellence — partly due to COVID; partly due to the sclerosis of public education as a product.

So why tag Governor Youngkin on this point?

The answer is rather simple. As we saw as recently as two weeks ago, Virginia Democrats are desperately trying to hamstring Youngkin before the honeymoon was even on — and are even more desperate now to derail the honeymoon before it even begins.

Case in point? Over the last two weeks, Virginia Democrats have blamed Governor Youngkin for the following:

The list goes on and on. Even Winsome Sears is getting a dose of it from woke Democrats accusing her of somehow being unauthentically black — her sin, of course, being an independent woman with a mind and conscience of her own who asks to be convinced rather than led about.

So what are the Virginia Democrats playing at? Two things — first and foremost, they are doing everything in their power to throw mud at Governor Youngkin in the hopes that he will back down early on his executive orders. Whether they have successfully painted Youngkin’s moves on RGGI and the mask mandates as “wins” remains to be seen (HINT: they aren’t), but the open hope is that Youngkin will blunt his own sword early.

Which leads to that second point — the honeymoon period. Virginia Democrats have a tried-and-true playbook when it comes to taking their opposition down a notch. Namely, they identify their virtues and call them vices. Youngkin is a decent guy? Total racist. Youngkin is trying to build consensus? Total partisan.

Quite frankly, it is the same thing they did to George Allen and Jim Gilmore, the same thing they did to Bob McDonnell in the end. Glenn Youngkin will get all that and more, not just for the reason that Youngkin might actually do what he says he is going to do, but for the more important reason that they are going to consistently test this governor to see where his weaknesses are, whether he will cave to bad press, and whether the hint of scandal is enough to manufacture scandal in the public eye.

But there’s an orchestra at work here.

This isn’t to suggest that Fisk is orchestrating the resistance here. Yet it is to say that Virginia Democrats — and the institutions the Democrats still hold — are going to fight Youngkin and the House Republicans in a way where if the tables were turned would be deemed obstructive, unprofessional, and downright unpatriotic.

With public faith in our institutions at all-time lows, one might imagine that Virginia Democrats would understand that progress and overreach are not synonyms. Like it or not, Virginia Republicans were given a mandate to wind back much of the progressive radicalism pushed by a fraction of the loyal opposition. Senate Democrats headed up by Sen. Louise Lucas (D-Norfolk) can push back, yet at some point, the vitriol begins to take on the hue of petulance rather than getting back to task at hand — the work of Virginia.

The political left in Virginia — whether that is the bureaucracy, the media, public education or our colleges and universities — are going to have to ask themselves whether the losses of 2021 need to be compounded by further losses in 2022 and beyond.

In short, they cannot simultaneously decry the lack of civility and decorum in American politics while conjuring images of actual civil war and remain ruthlessly intransigent as they continue to wall out center-right thought as too much to even countenance in their conception of a public square. When Jennifer Rubin is the maximum degree of latitude allowed at the Washington Post that’s problem more glaring than partisanship. In fact, it ensures such institutions fall prey to the very illness they claim to want to cure.

The bitter pill — and it is something my liberal friends by and large quietly agree upon — is that the progressive left possesses a unique problem entirely unto itself that cannot and should not be considered as the nemesis to the far right and alt-right. This is not a both/and conundrum; it is a cart/horse where the far right is inspired by the far left, and where the far left is much more deeply entrenched than the far right could ever dream of being entrenched.

It gets old — blame the institutions.

Here we arrive at the nub of the problem. Liberal institutions are discovering that they too are on the chopping block for progressives who view them as too weak to do what is necessary — and that the best insulation against fanaticism and sharp partisanship is all of us together.

Not one set of views over the other, but a return to the classical liberal tradition of Jefferson and Burke that refuses to treat disagreement as hate speech, but rather has the confidence of their ideas and willing to allow error to persist so long as reason is left free to combat it.

Only the political left can make this decision. With 5 of the 7 institutions firmly in their hands, it is within their power to work together with Republicans for the common good or continue to pit one half of us against the other half — which doesn’t seem to be working for them at any level of government.

One More Thing: Biden Tells Ukrainians They Are Going To Lose; Hopes They Kill a Ton of Russians Before They Do

That’s gotta be comforting to read in Kiev.

Of course, given that Berlin isn’t exactly playing ball with her NATO allies at present and that the Russians vast cash reserves should effectively insulate them from any serious consequences due to sanctions, it’s hard to see why the Russian Federation — should they choose to invade Ukraine — would not go all the way to the Polish border and possibly into the Baltic States in order to undermine NATO’s resolve.

The Biden White House isn’t precisely exuding leadership at present. Even the think tanks in Washington have been wincing a great deal as the US State Department continues to commit one forced error after another — only to have them complicated by statements from a president who has clearly lost his edge.

At some point, the options are to either yield on Ukraine and shore up NATO — admitting Sweden, Ireland, Finland, Switzerland and Austria while sending American troops to Poland — or put the chips in the center, enforce the 1994 Budapest Agreement and get ready for a Third World War.

The options come down to this. If the United States is not prepared to bleed for Kiev in the way that the Russian Federation is prepared to bleed for Kiev, then the rest is academic if we are openly telling the Ukrainians they cannot win a protracted war in a nation of 40 million over a geographic area the size of Texas. Yet the Russians — if dismantling NATO is a policy objective — may not stop with the Ukraine knowing that this is their best moment. NATO’s hand grows stronger and Russia’s hand grows weaker every week that passes.

The Russians are betting on an answer. Under Biden, they might be right.

By Shaun Kenney January 19, 2022 Can we simply end the pretense of factchecking yet? Harry Frankfurt commented once that facts matter to two sorts of people: those who believe in the truth and liars seeking to distort the truth. Yet there was a third sort — one might say a purveyor of and peddler in bovine excrement — who was…

By Shaun Kenney January 19, 2022 Can we simply end the pretense of factchecking yet? Harry Frankfurt commented once that facts matter to two sorts of people: those who believe in the truth and liars seeking to distort the truth. Yet there was a third sort — one might say a purveyor of and peddler in bovine excrement — who was…

Biden Tells Ukrainians They Are Going To Lose; Hopes They Kill a Ton of Russians Before They Do