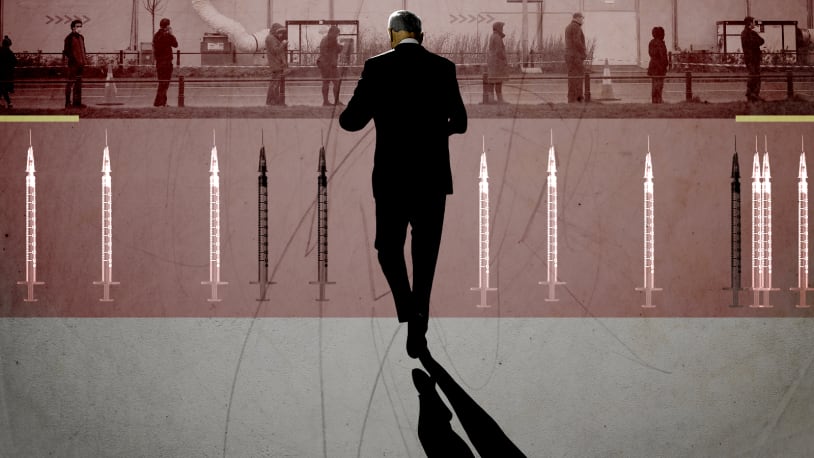 Biden is losing the vaccinated majority

President Biden’s popularity has fallen markedly from when he was inaugurated one year ago today. No doubt there are many reasons for this decline — the media panic attack over Afghanistan, inflation, shortages, and so on — but there’s another cause that’s hard to measure exactly: the quiet rage of the vaccinated.

Two years into the COVID-19 pandemic and nine months after vaccines became available to most adults, the majority of Americans who have done everything right are still being harmed by the willful irresponsibility of the unvaccinated minority. And the president’s response is negligible. Though he says there’s “no excuse for anyone being unvaccinated,” Biden is neither coercing vaccine refusers into doing the right thing nor channeling the anger of the vaccinated. Stewing resentment is the result.

Now, the vaccines don’t provide perfect protection against the hyper-contagious Omicron variant, but they do provide a great deal of immunity — especially with a booster shot, which cuts the risk of death almost to nothing. The most-vaccinated countries, like Portugal and Spain, are seeing huge caseloads thanks to the latest wave, but their hospitalization numbers are lower than last winter and deaths have barely increased at all. (Indeed, precisely because Omicron is so incredibly infectious, masks or test-and-trace systems are less effective, and vaccines are by far the best tool we have.)

Things are much worse in the United States. Thanks to endless right-wing propaganda and the Biden administration’s needless delay on boosters, we have low vaccination rates in general and low booster uptake in particular. As a result, national case and hospitalization numbers are both at record levels. Thankfully, deaths haven’t increased proportionally, but almost 2,000 people have died daily of COVID in the U.S. for the last week, and that rate has been over 1,000 per day since mid-August.

The vast majority of that serious illness and death could have been prevented by the vaccines, which are effective and free. Instead, too many hospitals — already battered by two years of pandemic tearing up a medical system designed for profit instead of care — are crumpling under the surge of unvaccinated patients. ICUs and emergency rooms are jammed; nurses and doctors are quitting by the thousands; critical non-COVID treatments are being delayed or canceled; and some hospitals have had to close temporarily.

Even for those of us who haven’t lost lives or jobs or health care, life still isn’t back to normal because the unvaccinated have functionally kept the pandemic going. Schools are still closing; many are still working from home; we’re still not going to restaurants and throwing parties and visiting family the way we’d like. The job market is better than it’s been in 20 years, but the country still feels like it’s in terrible shape.

And it didn’t have to be this way. As Yasmeen Serhan writes at The Atlantic, European leaders are also facing a restive population sick and tired of the pandemic. But unlike Biden, they’re channeling the frustration of the vaccinated majority by imposing more and more punishing burdens on the unvaccinated.

The European Union has a vaccine passport system, and from Portugal to Austria, steadily more and more locations are being closed off to vaccine refusers. French President Emanuel Macron recently said outright he wants to “piss off” the stragglers.

Frankly, I do too. The Washington Post recently published a profile of an Italian cellist who refuses to get vaccinated, apparently because Facebook memes turned his brain to soup, and as a result is barely able to leave his house. By its own lights, the story a thoughtful piece intended to raise questions about state power and the social contract, but reading it I felt nothing but vindictive glee. Here’s a stubborn, self-deluded jerk who refuses to get a vaccine that would cost him nothing, would let him go back to a mostly-normal life, would protect both him and others from a deadly virus, and is safer than aspirin — and so he’s been ostracized from society? Good.

I also greatly enjoyed the spectacle of the Australian government deporting tennis star Novak Djokovic after he lied about his vaccination status so he could compete in the Australian Open. A rich, comically deranged, woo woo jerk who thought he could do whatever he wanted without following the rules to protect Australian society — and he actually got punished for it? Hilarious.

And I’m not the only one feeling this way. Witness the large majority of Americans who support Biden’s vaccine mandates or would ban unvaccinated people from airlines, public events, or offices. Biden could be giving vent to this rage, if nothing else.

Legally, he has fewer options than other presidents or prime ministers to strong-arm the unvaccinated. The Supreme Court recently tossed his proposed vaccine mandate for employers on spurious grounds (though they did let stand the mandate for health-care workers at facilities that take Medicare or Medicaid payments).

But, as David Dayen argues at The American Prospect, the president still has vast powers. He can put through as many mandates and nudges as possible in every imaginable area, as quickly as possible, and hope that some of them take effect before courts can strike them down. He also can try to convince corporations to impose vaccine mandates on their employees, even if for no other reason than self interest — the CEO of United Airlines, for instance, recently described how before requiring vaccination, his workforce had seen one COVID death every week. Since then, he reported, United has “gone eight straight weeks with zero COVID-related deaths among our vaccinated employees.”

The value in these efforts would extend beyond their effect on vaccination, transmission, and death rates. They would also demonstrate to that angry majority that the government is doing something, that Biden understands their exhaustion and fury with an anti-social mindset so extreme it endangers the lives of adherents and the responsible among us alike.

January 20, 2022 January 20, 2022 President Biden’s popularity has fallen markedly from when he was inaugurated one year ago today. No doubt there are many reasons for this decline — the media panic attack over Afghanistan, inflation, shortages, and so on — but there’s another cause that’s hard to measure exactly: the quiet rage of…

January 20, 2022 January 20, 2022 President Biden’s popularity has fallen markedly from when he was inaugurated one year ago today. No doubt there are many reasons for this decline — the media panic attack over Afghanistan, inflation, shortages, and so on — but there’s another cause that’s hard to measure exactly: the quiet rage of…