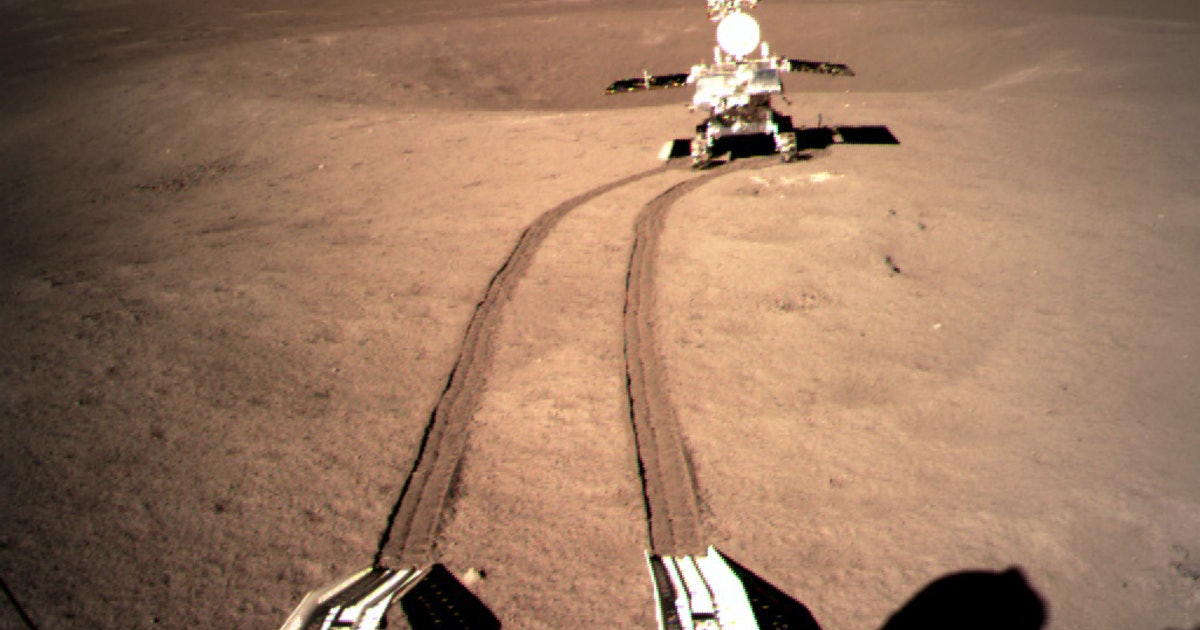 3 discoveries from the far side of the Moon

Although it turned out China’s Yutu-2 lunar rover did not discover an alien monolith on the Moon, but rather a small boulder that appeared bizarrely square from a distance, the lunar robot has still made other significant discoveries about the far side of the Moon.

In a new paper published Wednesday in the journal Science Robotics, researchers from the Yutu-2 rover team detailed their findings from two years of robotic explorations of the far side of the Moon (the side always facing away from us since the Moon is tidally locked with Earth).

While missions like NASA’s Lunar Reconnaissance Orbiter have provided detailed maps of the entire lunar surface, Yutu-2 has yielded information about the subsurface structure of the Moon’s far side and details about the lunar regolith that you can only learn by physically stirring up the dirt. The results could help guide further lunar exploration by both China and the US.

Yutu-2 made three critical discoveries by playing in the lunar dirt, all of which could have implications for future robotic and human exploration of the far side of the Moon and our satellite’s southern polar region.

3. The far side terrain is relatively flat and free of rocks

In the first 25 lunar days (around 738 Earth days) of Yutu-2’s mission, the rover crawled over more than 2,700 feet across the 110-mile diameter Von Kármán impact crater within the Aitken Basin at the Moon’s southern polar region.

The Yutu-2 rover found the terrain to be relatively flat and free of rocks compared with areas on the side of the Moon facing Earth, such as the Mare Imbrium explored by the first Yutu rover from 2013 to 2015, and by Luna 17 and Apollo 15 in the early 1970s. “Rocks along the traverse route (Fig. 6) are relatively rare in comparison with those scattered around the [Yutu-1] landing site,” the story authors write. Larger rocks like those seen at Mare Imbrium “are absent from observations.”

At least we now know what the small boulder responsible for the “mystery hut” mirage, now dubbed “Jade Rabbit,” stood out so well at the rim of a crater. And speaking of craters …

2. The lunar far side is crater-strewn

There are 88 impact craters within 50 meters of the path Yutu-2 has taken across the Moon, with an average diameter of almost 12 meters. The vast majority come in at less than 10 meters diameters. Planetary scientists believe the craters to be largely secondary impact craters from ejecta thrown from the impact that created the Zhinyu crater west of the rover’s landing site.

It was in the bottom of a 2-meter diameter crater that Yutu-2 discovered another compelling mystery, a “dark greenish, glistening material” originally described as gel-like, which may be rock melted together by the heat of an impact.

1. The far side lunar regolith has the consistency of sticky sand

By observing how lunar regolith stuck to the Yutu-2 rover’s wire mesh wheels and measuring how the wheels occasionally slipped in the regolith, the researchers were able to calculate its consistency and load-bearing properties. “The regolith resembles dry sand and sandy loam on Earth,” they write, “demonstrating greater bearing strength than that identified during the Apollo missions.”

The somewhat sticky property of the lunar regolith was observed across multiple lunar days, suggesting it is a regional characteristic rather than a site-specific property of a patch of regolith, the researchers write, and they theorize the property may result from greater and more prolonged exposure to space weathering than lunar near-side regions.

How they did it — The Yutu-2 rover is a relatively lightweight (77 pounds), six-wheeled, semi-autonomous rover equipped with a panoramic camera, near-infrared spectrometer, and ground-penetrating radar, among other scientific instruments. The rover landed on the Moon on January 3, 2019, as a component of the Chang’e 4 mission, the first soft landing on the far side of the Moon. Together, the Chang’e 4 lander and Yutu-2 rover are the successors to the Chang’e 2 lander and original Yutu rover mission, which made the first soft landing in the Mare Imbrium on the Moon since Luna 24 in 1976.

What’s important about the Yutu-2 findings?— The Yutu-2 rover findings could help guide the design of future robotic missions to the southern polar region on the far side of the Moon.

The more-supportive-than-expected soil could support larger-scale robots, the researchers note, while the cratered surface could necessitate “legged robots, hybrid wheel-legged robots, or tethered rovers” for future exploration — Yutu-2 wasn’t able to get up close and personal with the greenish gel-like substance because researchers feared it wouldn’t be able to climb back out of the crater.

And given that the sticky regolith adhered to the lugs on Yutu-2’s wheels rather than the wire mesh, future missions might consider “coating the lugs’ surface with a special anti-adhesion material.”

Both the China National Space Administration and NASA plan to explore the Moon’s southern polar — China as part of the International Lunar Research Station program it is pursuing with Russia, and NASA as part of the Artemis program and its Commercial Lunar Payload Services initiative.

What’s next?— Yutu-2 will continue exploring the far side of the Moon, and the researchers hope to make better use of the tools the rover makes available to learn even more about the environment. And they’re not just considering the dedicated science instruments.

“For instance,” they write, “trenching experiments can be conducted using one of the rover’s wheels to expose the near-subsurface soil.”

Abstract — The lunar nearside has been investigated by many uncrewed and crewed missions, but the farside of the Moon remains poorly known. Lunar farside exploration is challenging because maneuvering rovers with efficient locomotion in harsh extraterrestrial environment is necessary to explore geological characteristics of scientific interest. Chang’E-4 mission successfully targeted the Moon’s farside and deployed a teleoperated rover (Yutu-2) to explore inside the Von Kármán crater, conveying rich information regarding regolith, craters, and rocks. Here, we report mobile exploration on the lunar farside with Yutu-2 over the initial 2 years. During its journey, Yutu-2 has experienced varying degrees of mild slip and skid, indicating that the terrain is relatively flat at large scales but scattered with local gentle slopes. Cloddy soil sticking on its wheels implies a greater cohesion of the lunar soil than encountered at other lunar landing sites. Further identification results indicate that the regolith resembles dry sand and sandy loam on Earth in bearing properties, demonstrating greater bearing strength than that identified during the Apollo missions. In sharp contrast to the sparsity of rocks along the traverse route, small fresh craters with unilateral moldable ejecta are abundant, and some of them contain high-reflectance materials at the bottom, suggestive of secondary impact events. These findings hint at notable differences in the surface geology between the lunar farside and nearside. Experience gained with Yutu-2 improves the understanding of the farside of the Moon, which, in return, may lead to locomotion with improved efficiency and larger range.

Although it turned out China’s Yutu-2 lunar rover did not discover an alien monolith on the Moon, but rather a small boulder that appeared bizarrely square from a distance, the lunar robot has still made other significant discoveries about the far side of the Moon. In a new paper published Wednesday in the journal Science…

Although it turned out China’s Yutu-2 lunar rover did not discover an alien monolith on the Moon, but rather a small boulder that appeared bizarrely square from a distance, the lunar robot has still made other significant discoveries about the far side of the Moon. In a new paper published Wednesday in the journal Science…

New study reveals the gentler side of black holes