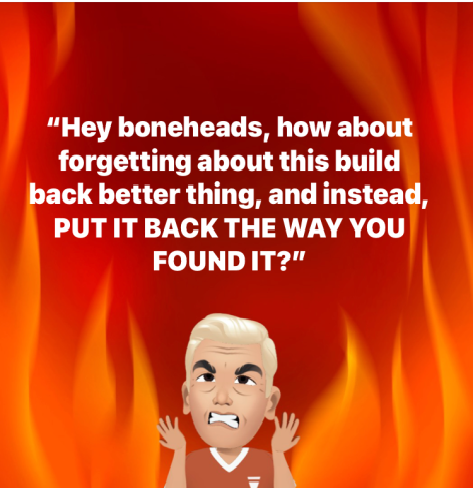 Did “Marco Inaros” and the Belter Free Navy throw that our way? BTW, why are we never nervous about one of these things hitting our moon? I’d imagine that would be sorta-kinda bad too.

Crime already running amuck not even a full month into 2022:

Tom Hogan: Cracking the case of the “woke” prosecutor

The report by the Special Inspector General for Afghanistan Reconstruction John Sopko, submitted to the Department of Defense in January 2021, underscores that American authorities had been alerted that Afghanistan’s air force did not have the capabilities to survive after a U.S. withdrawal. In particular, the report points to U.S. failure to train Afghan support staff, leaving the air force unable to maintain its aircraft without American contractors.

U.S. air support to government forces was key in the 20-year-war against Taliban insurgents. Its removal — along with the inability of the Afghan air force to fill the void — was one factor that contributed to the Taliban’s sweeping victory as the Americans withdrew…

When asked in an interview with ABC’s George Stephanopoulos if he was warned of such a collapse of the Afghan government upon our pull-out, Biden said this BS about being warned by intel and advisors (highlight at 2:45 mark)…

Somebody is bald-faced lying here, and Biden did not help himself tagging “Not that I recall” on the end of his denial of being informed of a probable collapse. But don’t look for any #WOKE military brass involved in this administration’s malpractice to come forward … atleast not until they’re a safe distance from Biden and can write a tell-all book that will lay it out, but buffer it with deflecting blame on what Pres. Trump had set-up with his withdrawal plan that, for some reason, old Joe believed was the only single solitary thing Trump did but Biden wouldn’t scrap after taking office. Wait for it, the old, “Well, what we inherited from the previous administration…” schpiel the dems always fall back on when they fail.

Ryan Saavedra: Russia Signals It May Move Nuclear Missiles Near U.S. Coastline As Its Anger Grows With Biden: Report

Steven Nelson: Joe Biden spent a quarter of his first year as president in Delaware

President Biden spent 28 percent of his first year as commander-in-chief back home in Delaware, worrying transparency advocates who note that he exempted his homes from visitor log disclosure…

But critics are concerned about who may be seeking to influence public policy while paying Biden or his family a visit.

“Generally speaking, the American people have a right to know what the president is up to. This president specifically changed policy to presumably disclose who’s been visiting the White House,” said Tom Fitton, president of conservative legal group Judicial Watch, which for years has battled for White House visitor log transparency.

“The decision to keep secret who is visiting Delaware makes a mockery of that transparency. It turns it into a joke,” Fitton said…

DM: Michigan Democrats are condemned over Facebook posts on education

You know, the teachers, their unions, and their political party in general and in office had better get it straight: These people work for us and must take seriously our feedback and demands because these are OUR kids, not theirs, and as THEIR parents and guardians whose taxes are sucked away for their school buildings, supplies, operations, AND paychecks, they are employees and we indeed are very much a huge part of their CEO system. Oh, and the strong suggestion for parents who are not happy or in agreement just take their kids to private schools, well, they have no idea just how quick and massive that exodes would be if/when our tax dollars are diverte from their direction and into vouchers to spend where we want to spend them for our kids’ serious academic education. In other words, ‘careful what you wish for’, you asinine tyrants.

Tessa Weinberg: A Parents’ ‘Bill of Rights’? Missouri May Give Families More Say in Classrooms

Kevin Downey, Jr: Sub Teacher Claims She Was Fired for Not Meowing Back at Student Who Identifies as Feline

Question: Did the same school provide the kid with a litter box and scratch post? … `cause therein lies the sub’s defense.

Democrats in Free-Fall into the Sewer:

Amid the report(s) that republicans are picking-up folks defecting from the democrat-party-gone-Marxist, “The Forehead”, as Rush Limbaugh named him, has his “basket full of deplorable” moment that’ll probably, you know, help gin-up the dems’ numbers … not.

Joseph A. Wulfsohn: CNN’s Paul Begala: Democrats don’t have ‘bad leaders,’ they have ‘bad followers’: Critics bashed the liberal pundit on social media … The Forehead took it in a different crosshair direction than his old cohort from CNN, Democratic strategist James Carville, took it just a couple of days before…

Brian Flood: Democratic strategist James Carville: ‘Democrats whine too much… quit being a whiny party’: Ragin’ Cajun urged Democrats to stop complaining and gloat about successes … What “successes” are those, Jimmy?

Tim Haines: Tucker Carlson: Hillary Clinton 2024, She’ll Do For Us What She Did To Libya Twitchy: Warriors issue really vague statement about part-owner who said no one cares about genocide in China; Updated

Wayne Allyn Root: My Debate With an ICU Doctor About the Possible Dangers of the COVID-19 Vaccine: As always, no facts — just name-calling.

Jesse James: Triple-vaxxed AOC has survived the dreaded Omicron and took the opportunity to tell us how evil we are … All the universe revolves around her.

Phil Shiver: US airlines issue dire warning ahead of 5G rollout: ‘To be blunt, the nation’s commerce will grind to a halt’

Posted by Maggie on January 18, 2022 in From the editors (Meme HT: My good pal Chuck on Facebook) Hey, maybe help is coming, huh?… David Aaro: Large ‘potentially hazardous’ asteroid passing by Earth on Tuesday: NASA deems 1994 PC1 a ‘potentially hazardous object’ because of its size and distance from the Earth Did “Marco Inaros” and the Belter Free Navy throw…

Posted by Maggie on January 18, 2022 in From the editors (Meme HT: My good pal Chuck on Facebook) Hey, maybe help is coming, huh?… David Aaro: Large ‘potentially hazardous’ asteroid passing by Earth on Tuesday: NASA deems 1994 PC1 a ‘potentially hazardous object’ because of its size and distance from the Earth Did “Marco Inaros” and the Belter Free Navy throw…

O, Canada! What to Do With You?