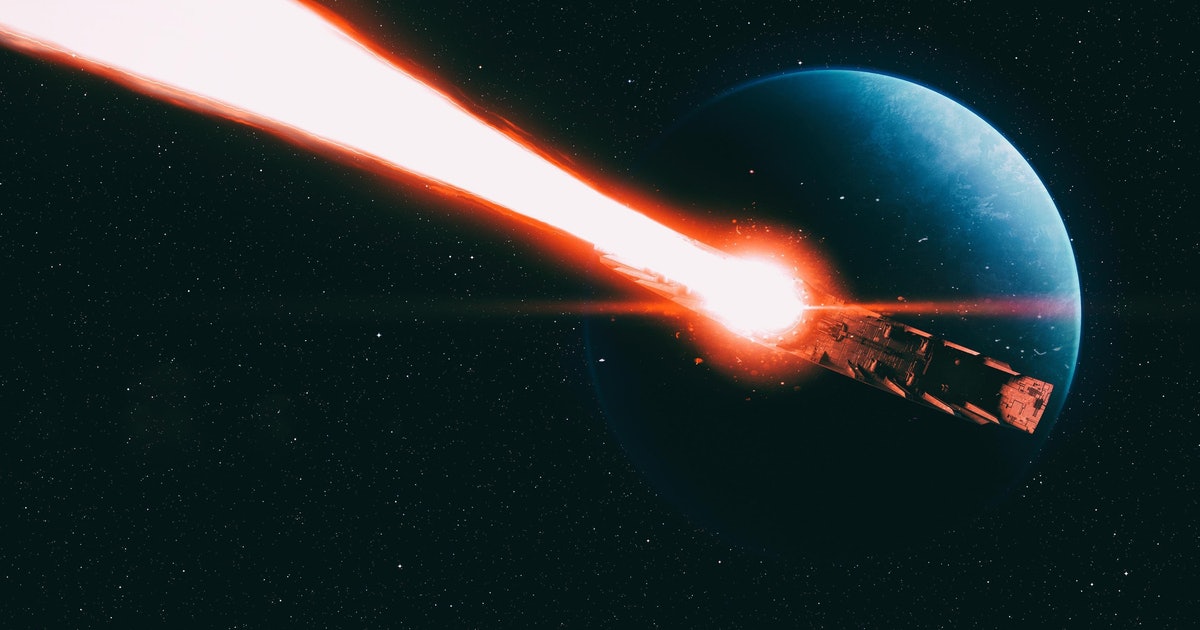 The First Order was almost 10 times scarier. Leaked concept art has revealed that in one early plan for Star Wars: Episode VII, Starkiller Base would have destroyed the New Republic’s HQ on the famous planet Coruscant.

Obviously, this didn’t happen in the movie, but now that we know it was almost Coruscant, it suddenly feels like The Force Awakens squandered a huge opportunity to do something daring. Here’s why this leaked art makes it feel like Starkiller Base missed the mark.

Starkiller Base and Coruscant

After a Star Wars-focused Twitter account tweeted out concept art from The Force Awakens — along with the claim that the concept art depicted the destruction of Coruscant — they tagged Lucasfilm rep Pablo Hidalgo, who confirmed this was indeed the case. At some point the idea was to have the First Order destroy the New Republic while it was based on Coruscant.

Hidalgo downplayed the tweet, saying, “The concept art resembles Coruscant because for a time it was, but that planet had the potential to be featured in something else in development so it was changed to a different location. Not really all that newsworthy.” Although it may not be newsworthy to some, if you’re interested in the galactic politicking of the Star Wars galaxy post-Return of the Jedi it’s very interesting!

The Force Awakens, behind the scenes

In the final version of The Force Awakens, Starkiller Base destroys “the Republic,” which we later learn is in the Hosnian system. At the time of the movie’s release in 2015, this was a new star system in Star Wars lore and indicated that the New Republic didn’t set up shop on Coruscant after beating the Empire. This was a subtle but large departure from Legends lore, in which the New Republic takes over the same structures occupied by the Empire and runs things from Coruscant. In fact, Coruscant itself comes from Legends canon; it’s first introduced in Timothy Zahn’s novel Heir to the Empire, then retroactively becomes the seat of power for the Old Republic in The Phantom Menace.

By moving the center of New Republic political power away from Coruscant, The Force Awakens established a new way to think about how a “centralized” Star Wars system of governance might work. This idea was emphasized by background dialogue in The Mandalorian, which confirmed that Chandrila (home to Mon Mothma) was the capital planet for the New Republic in roughly 9ABY. This means that in the current canon the New Republic had at least two capitals before The Force Awakens — Chandrila and the Hosnian system — but never Coruscant.

The tweets from Hidalgo suggest that Courscant wasn’t used as the seat of the New Republic in The Force Awakens because Lucasfilm didn’t want Courscant destroyed. There was possibly another project in development that needed the planet to exist in that timeframe. We also know that Colin Trevorrow’s unmade Duel of the Fates script would have ended the entire saga on Courscant, and revealed that the planet was under the control of the First Order at that time (this would check out with Kylo Ren’s line about accessing the “Imperial archives”).

But because there’s basically no mention of Courscant in the existing sequel trilogy, suddenly not having it destroyed in The Force Awakens feels like an odd oversight. Because the planet effectively doesn’t exist in either The Last Jedi or The Rise of Skywalker (no one goes there or mentions it) then why not have it get blown up in The Force Awakens?

The essential problem with Starkiller Base in The Force Awakens was the stakes at play. Because Starkiller Base destroyed several planets we’d never heard of, with people on them we didn’t know, it was hard to believe it was scarier than the Emperor’s planet-destroying base It was bigger, but it didn’t move, and that it didn’t blow away anyone we knew made the threat feel empty.

If Starkiller Base had destroyed Courscant it would have hit differently. Imagine the Jedi Temple crumbling. Imagine seeing the familiar skyline from the prequels in flames. For those who grew up on the Legends novels and the prequel films, annihilating Courscant would have been a huge gut-punch.

Although fans tend to regard The Force Awakens reasonably well, the number one complaint has always been that the recreation of the plot of A New Hope just never really worked. Arguably, this failing is because Starkiller Base was never really scary enough. We can’t go back in time and make General Hux shoot a different planet. But if we could, the entire sequel saga could have made us feel more than it did.

The First Order was almost 10 times scarier. Leaked concept art has revealed that in one early plan for Star Wars: Episode VII, Starkiller Base would have destroyed the New Republic’s HQ on the famous planet Coruscant. Obviously, this didn’t happen in the movie, but now that we know it was almost Coruscant, it suddenly…

The First Order was almost 10 times scarier. Leaked concept art has revealed that in one early plan for Star Wars: Episode VII, Starkiller Base would have destroyed the New Republic’s HQ on the famous planet Coruscant. Obviously, this didn’t happen in the movie, but now that we know it was almost Coruscant, it suddenly…