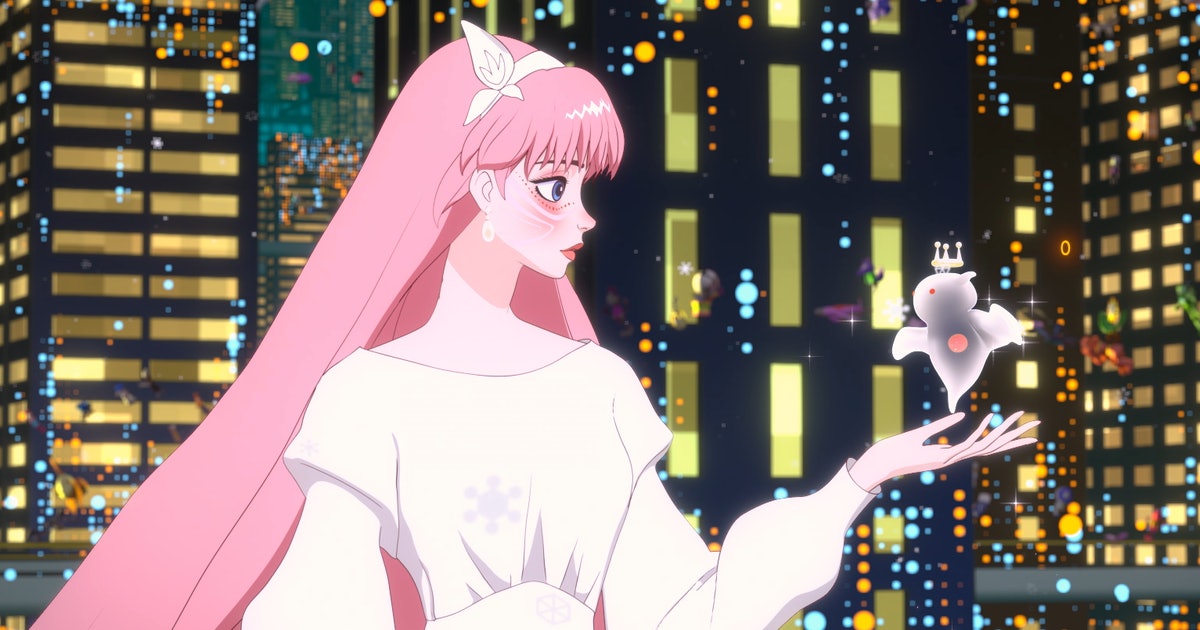 It’s 8:00 at night and several hundred million users have logged on for a virtual concert headlined by their favorite new idol, a freckled, pink-haired diva named Belle. But in the span of one song, the whole show is ruined by a cloaked draconic figure on the run from armor-clad vigilantes. They outnumber him dozens to one, but as they advance in wave after wave he dispatches them with ease while sparing Belle a glance as if to make sure she’s watching.

She is. She can’t take her eyes off him, in fact, specifically his cape, speckled by bruises arrayed in a riot of colors. When they do make eye contact, his words shock her. “Don’t look at me.” It’s almost a warning: Moments later, he demolishes the remaining toughs and makes his breathtaking escape.

This is the turning point in Japanese filmmaker and animator Mamoru Hosada’s new movie Belle based on Jeanne-Marie Leprince de Beaumont’s 1756 fairy tale Beauty and the Beast. Belle is neither better nor worse than Disney’s 1991 animated film (though it goes without saying that it makes the 2017 live-action version look very silly). Instead, it’s a clear product of the Information Age and Hosada’s unique sensibilities as a storyteller.

Belle weighs the benefits the internet offers against the harm it causes. People are often cruel in the real world; given a veil of anonymity, they can be crueler. Belle contextualizes the modern internet with “U,” a virtual sandbox envisioned as a gorgeous world of endless possibilities that’s been squandered by nosy gossip mongers and self-righteous scolds. U invites the forlorn and the desolate to find a facsimile of community, but community is an ideal that’s difficult to realize when it comprises fickle strangers. One moment they’ll shower you with adoration. The next, they’ll make up conspiratorial nonsense about you.

Belle understands the allure and addiction of social media – Twitter, Facebook, TikTok, Instagram – which is the best analog to U that Hosada’s audience has. (Massive online video games like World of Warcraft and League of Legends work too, to varying degrees.) The film dangles that appeal in front of Suzu (Kaho Nakamura in the Japanese voice cast, Kylie McNeill in English), Hosada’s protagonist and a lonesome teenager whose mother was her greatest source of support for her singing aspirations. After mom passes away, Suzu’s singing voice is snuffed out. Her grief alienates her from her classmates because kids are pitiless dicks.

In U, however, Suzu finds that she can sing freely again, and adopts an avatar named Bell, who in short order becomes U’s most beloved pop icon. Then comes the Dragon (Takeru Satoh in the Japanese voice cast, Paul Castro Jr. in English), and Belle’s plot pivots.

The aesthetics of U, where Belle spends about half its running time, are staggering. A vast pixelated sea that the ids, egos, and superegos of its hundreds of millions of users all sail upon, U is a dream sold by the science fiction canon and presented in startling detail by Hosada’s animation team. But it’s his screenplay that welds this dream to harsh reality.

Like any popular social media app, U is a cacophony. Boundless and nearly lawless, it never stops and its users never shut up. They can’t be shut out or banned, either, which raises an important user issue: Why does anyone bother?

Until the movie’s climax, the push-pull between the good, the bad, and the worst of life in a virtual space is dominated by the latter. Suzu’s megastardom gives her a taste of a joy she’s missed for half of her life, but that joy doesn’t translate into anything concrete. It’s weightless and empty. Nobody can know she’s Bell, because she risks her virtual celebrity status if they find out, which means all her virtual accolades don’t bring peace of mind she’s craved since her mother’s demise.

Hosada touches that bruise over and over, and it isn’t until the Dragon – referred to in U, of course, as “the Beast” – crashes into her life that she’s given impetus to marry her dual existences online with offline and find real meaning in both.

A betting person might guess that Hosada believes in the internet as a machine that, just like the movies, generates empathy. To make that point in Belle, he puts apathy first, which makes the film’s happier moments brim with tear-jerking compassion. (At times it’s absolutely hilarious, too.) Technological fascination aside, Hosada is a humanist, and Belle reflects those priorities as cleanly as it illustrates the divisions between virtual reality and, well, reality.

A life lived online isn’t necessarily a life lived — unless that life has purpose offline, too.

Belle is in theaters now.

It’s 8:00 at night and several hundred million users have logged on for a virtual concert headlined by their favorite new idol, a freckled, pink-haired diva named Belle. But in the span of one song, the whole show is ruined by a cloaked draconic figure on the run from armor-clad vigilantes. They outnumber him dozens…

It’s 8:00 at night and several hundred million users have logged on for a virtual concert headlined by their favorite new idol, a freckled, pink-haired diva named Belle. But in the span of one song, the whole show is ruined by a cloaked draconic figure on the run from armor-clad vigilantes. They outnumber him dozens…