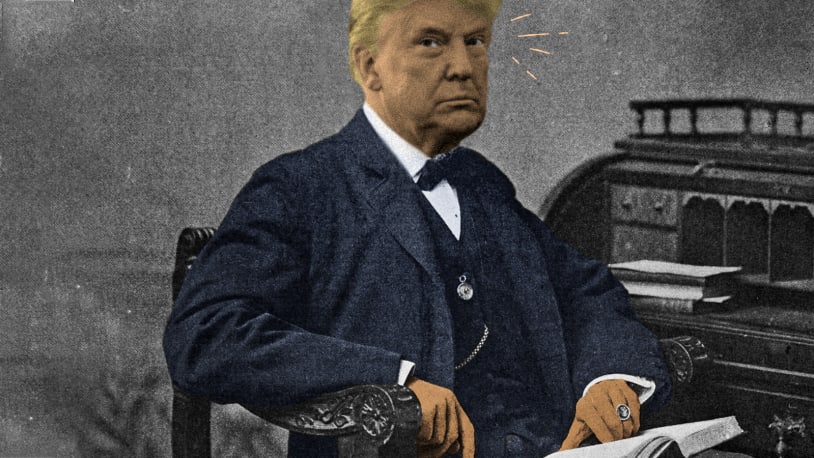 Former President Donald Trump held his first big rally of 2022 Sunday night in Arizona, and all his familiar old tendencies were on display. He obsessed about the 2020 election he still falsely claims was stolen from him. He slammed President Biden and the media. He boasted a lot. If you’ve spent the last half-decade or so watching Trump the politician, it would be easy to believe that absolutely nothing has changed about him.

But that’s not quite true.

One of Trump’s chief characteristics as president was that he wasn’t very good at his job. He spent too much time watching Fox News and raging on Twitter and sometimes seemed to think his chief role in the Oval Office was to tangle with the media — he was a man who loved attention but didn’t seem much interested in doing the work. Trump’s narcissism and short attention span led The Washington Post‘s Dan Drezner to dub him the “Toddler in Chief,” while The New York Times’ Ross Douthat made the case that the then-president was too much of a “noisy weakling” to be much of a threat to American democracy.

Trump will always be Trump. He’s 75 years old; it’s a bit much to expect major changes in his approach or outlook at his age. Still, there are signs that as he prepares for a likely 2024 run to recapture the presidency, he’s taking a smarter, more systematic approach to acquiring and using power — and, perhaps more importantly, that his party is shaping itself to accommodate him.

He’s thinking about the Senate.  As Biden is currently demonstrating, much to his fellow Democrats’ dismay, there’s only so much a president can do if the legislative branch hasn’t signed into his agenda. Trump sometimes seemed surprised that he couldn’t rule the country by decree. Senate Republican Leader Mitch McConnell (R-Ky.) was happy to give Trump tax cuts and judges because those things were also on his agenda and had been for a long time. But when it came to other Trump priorities — like a ban on renaming Army bases that had been named for Confederate generals or sending extra stimulus money to Americans during the pandemic — McConnell bailed. And, of course, McConnell rejected Trump’s efforts to overturn the 2020 election.

This time, Trump knows to be prepared. His ally Sen. Lindsey Graham (R-S.C.) is making noises about replacing McConnell with somebody more friendly to the once and perhaps future president. And Trump is also looking to back other Republican candidates for Senate who will be more pliable. “If Trump is planning to run for president — which all signs point to, he is — the most important thing should be to elect more people to the Senate who share his worldview,” one anonymous adviser told Politico last week. “I think the biggest problem Trump had in the first four years was the lack of ideological supporters in the Senate.”

House Republicans are ready to sign on. GOP members in the lower chamber have generally been more Trumpist than their Senate counterparts, but that’s not always been the case of their leaders. Former House Speaker Paul Ryan (R-Wisc.) favored an agenda of austerity and budget cuts that was at odds with Trump’s disregard for fiscal conservatism. Ryan retired after the 2018 election rather than continue to work with his party’s new leader.

His successor as Republican leader, Rep. Kevin McCarthy (R-Calif.), is more accommodating — most notably spearheading the effort to eject Rep. Liz Cheney (R-Wyoming) from party leadership for her continued opposition to Trump.  Axios reported last week that if McCarthy becomes speaker after the 2022 midterm elections, he plans to “institutionalize key Trumpian priorities” with proposals to crack down on immigration and tech companies. “We’re going to be more aggressive than in the past,” McCarthy said.

He’s interested in state-level races, too. Trump made clear last week that he’s taking a keen interest in statewide races for officials who will oversee vote counting in 2024. “We have to be a lot sharper the next time when it comes to counting the vote,” he said in a video for Pennsylvania Republicans. “Sometimes the vote counter is more important than the candidate. They have to get a lot tougher and smarter.”

Trumpist candidates for secretary of state are raising record amounts of cash for their campaigns. They’re also combining efforts: Jim Marchant, a GOP candidate for secretary of state in Nevada who promotes Trump’s lies about the 2020 election, has been promoting a coalition with other “America First” hopefuls to supervise the 2024 election. The clear goal is to win the White House back for Republicans.

Trump became president in 2016 almost by accident, carried along by his celebrity and Twitter mania into a job he clearly didn’t expect to hold. It showed. Heading into 2024, though, it appears the former president has a better idea of where the levers of power are, as well as a Republican Party more willing to help him push them.

That doesn’t mean he’ll be successful: His impulses have always overwhelmed his efforts at self-discipline in the past. But Trump may not have to be that much smarter or cunning to become more effective at pursuing his goals. If you think Donald Trump is bad for America, that should be scary news.

Former President Donald Trump held his first big rally of 2022 Sunday night in Arizona, and all his familiar old tendencies were on display. He obsessed about the 2020 election he still falsely claims was stolen from him. He slammed President Biden and the media. He boasted a lot. If you’ve spent the last half-decade…

Former President Donald Trump held his first big rally of 2022 Sunday night in Arizona, and all his familiar old tendencies were on display. He obsessed about the 2020 election he still falsely claims was stolen from him. He slammed President Biden and the media. He boasted a lot. If you’ve spent the last half-decade…